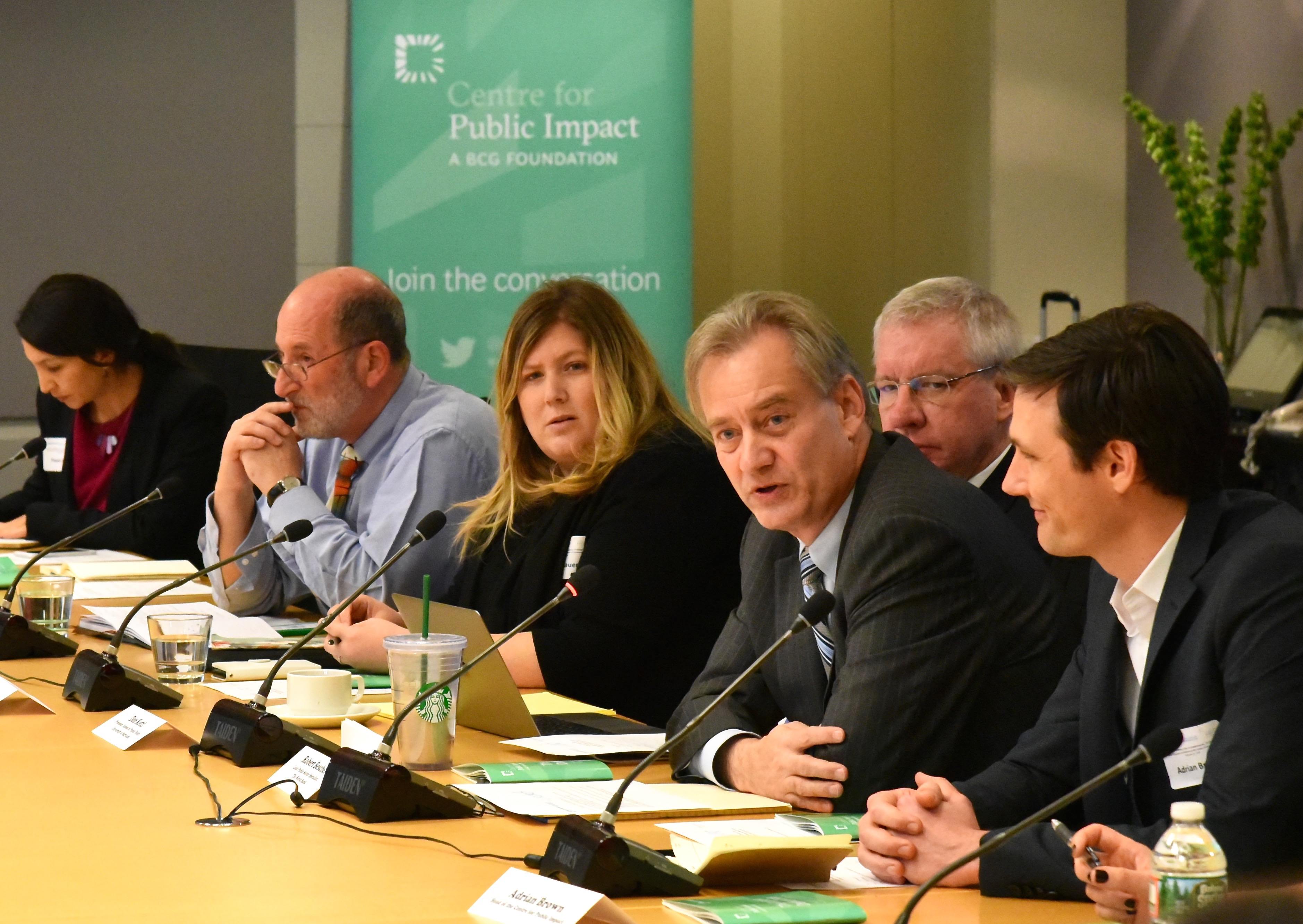 Promising innovations in public-sector management don’t come along every day – and when a new approach for delivering results shows some signs of success, it’s worth analyzing carefully for possible adaptation in other contexts.

The conference, “The Future of Delivery Units: Accomplishments, Challenges and New Directions for Reforms at the Center of Government,” explored results from a wide range of countries that have used delivery units to keep public-sector bureaucracies focused on achieving results.

Convened jointly by the GGP’s Center of Government Global Solutions Group; the President’s Delivery Unit within the World Bank Group; and a nonprofit group – the Centre for Public Impact (CPI), a global foundation funded by the Boston Consulting Group – the conference explored how such units can help improve public-sector productivity and effectiveness.

As the conference chairmen – Robert Beschel, the Global Lead of the GGP’s Center of Government Global Solutions Group, and Adrian Brown, the Executive Director of CPI – told the attendees, the idea of delivery units "should be considered, along with other promising reforms to strengthen the center of government, such as those focusing on cabinet operations or strengthening policy coordination." In the era of the Sustainable Development Goals – among which Goal 16 focuses on the GGP ideal of building stronger institutions – delivery units are worthy of serious consideration in achieving better public outcomes in developing economies.

An innovation pioneered in the United Kingdom under Prime Ministers Tony Blair and Gordon Brown, various forms of delivery units have now been used in dozens of governments worldwide, both at the national and sub-national levels. Among the scholars and practitioners who detailed their findings was Ray Shostak, who led the Prime Minister’s Delivery Unit (PMDU) at No. 10 Downing Street during the Blair era.

Although it is unrealistic to think of such units as “a silver bullet” that can quickly transform service delivery, Shostak said, they can certainly help intensify government agencies’ focus on achieving public-sector goals. Shostak also argued that the focus should not be on the units themselves but on the approaches and disciplines that they engender — focusing on such factors as analyzing evidence, creating feedback loops, and unblocking pernicious problems that cut across government ministries.

Shostak’s insight was underscored by Beth Blauer, who led the Governor’s Delivery Unity in the state of Maryland under then-Governor Martin O’Malley and who now leads a public-sector management program at the Johns Hopkins University.

A public-sector leader must have “chutzpah” to demand better outcomes and “eradicate waste of money, time and resources” – but can enlist government employees’ support by explaining that “we’re going to help you do your jobs” and achieve better results.

A professor who has long pursued public-sector research, Don Kettl of the University of Maryland’s School of Public Policy, echoed that finding – asserting that delivery units can indeed “improve the odds of success in meeting your challenges,” while cautioning that inspiring greater demand among voters for better public-sector management remains a challenge, because “it’s hard to get people to pay attention over the long haul.”

Kettl also noted that the institutional feedback mechanisms developed by Delivery Units and other center-of-government reforms can help countries respond more rapidly and adaptively to unforeseen crises, such as the Zika virus — a point that was later validated by Edilberto Xavier, a Treasury Executive in the Brazilian state of Pernambuco.

Among the many other panelists at the conference, Willie McCourt – formerly a senior specialist with the GGP who now teaches at the University of Manchester – outlined how delivery units in a number of countries have succeeded in “delivering at scale” and “achieving big results fast” when they approach their task with “urgency and a bias for action.”

He also underscored that certain preconditions are essential for their success, and that they are a relatively new development whose ultimate value and long-term sustainability will require a decade or more to truly understand.

The participants considered new evolutions in Delivery Unit structures and approaches. Kate Josephs, Executive Director of the Performance Improvement Council within the U.S. Government, noted that many of the principles of effective performance management are now being internalized by various line departments. Former GGP senior specialist Harry Garnett described how Cabinet-level reforms that sped policy analysis and ensured coordination in Zambia in the late 1990s have managed to endure over the past two decades in spite of several political transitions.

Claire Vallings, a senior governance adviser with the United Kingdom’s Department for International Development (DFID), who recently worked at the sub-national level in Pakistan, sounded a note of caution about the shortcomings of the delivery-unit approach in countries with low government capacity – reminding the conference that such units “are not the be-all and end-all in driving positive change.”

Despite their occasional caveats, the panelists praised the still-young concept of “deliverology” as an important contribution to strengthening public-sector productivity. That “deliverology” idea has been championed by Sir Michael Barber, who designed and was the first leader of the PMDU under the Blair government in 2001 and who is now the co-chair of CPI. Although “deliverology” was initially used as “a light-hearted term” coined by British civil servants to puckishly prod the developing “science of delivery,” Barber’s PMDU adopted it and “gave it a positive definition.”

Barber’s approach underscores the “moral purpose” of improving the effectiveness and accountability of government worldwide by helping build their capacity to deliver, noting: “Where government fails totally, the consequences are devastating; where government performs poorly, the lives of citizens are held back and cynicism about accountable government becomes rife; and even where government is simply suboptimal, resources are wasted and as a result development is impeded.”

Uniting hands-on practitioners with theorists and management consultants, the conference opened the way toward longer-term collaboration among public-sector-focused researchers, WBG staff in the field and WBG client countries.

Continued creativity in public-sector management – including shaping the work of delivery units and other center-of-government reforms in countries that seek bold new mechanisms for delivering services to their voters and taxpayers – will be essential in building effective institutions that are equipped to drive ever-stronger public-sector efficiency and effectiveness.