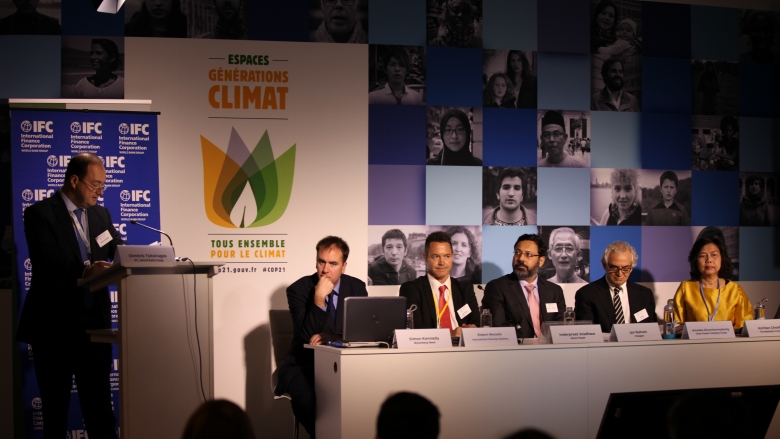 December 2015 marked a historic climate agreement in Paris signed by 195 countries pledging to take actions to keep global warming to under 2 degrees Celsius -- the threshold scientists predict will result in irreversible warming and planetary change. The signatories of the agreement were sovereign nations, but it was broadly acknowledged that translating the agreement into action will require the ingenuity and finance of the private sector.

The private sector was more visible and active at COP 21 than in any previous COP. CEOs from industries as far ranging as cement, transportation, energy, and consumer producers stepped up their efforts to address climate change, making their own commitments to decrease their carbon footprints, adopt renewable energy and engage in sustainable resource management. Global financial institutions pledged to make hundreds of billions of investment available over the next 15 years for clean energy and energy efficiency.

Throughout the negotiations, the private sector called on governments to put in place predictable, long-term regulatory regimes, including a price on carbon and incentives for decarbonization. They also encouraged adoption of supportive policies that could facilitate the transition.

The private sector has an important role to play in climate finance. In fact, the private sector is the largest source of climate finance, devoting $243 billion USD in 2014 to climate-related investments, according to the Climate Policy Initiative’s Global Landscape of Climate Finance 2015. Private finance increased by nearly $50 billion USD last year, driven mainly by a record amount of new renewable energy investment in emerging markets.

The IFC showcased several of our clients from emerging markets who are climate change leaders on a panel at the Caring for Climate Business Forum at COP21. Panelists from International Housing Solutions of South Africa, Azure Power of India, Hexagon of Turkey, Solar Power Company Group of Thailand, and The Mahindra Group of India shared details of their innovative climate-smart technologies, investments, and initiatives. They shared valuable insights and perspectives on challenges and opportunities to scaling their business’ solutions in their home countries and internationally.

In the next few decades, rapid urbanization will change the economies and lifestyles of people living in developing countries. It is expected that 70 percent of the world’s population will live in urban areas by 2050, with the biggest growth in emerging markets. Since buildings are expected to count for 30 percent of global emissions by 2030, it is critical to make the right investment choices today to push the market towards resource efficiency. In this way, we can avoid locking in high-carbon urban infrastructure and reward those who choose to develop, live and work in green buildings.

With this in mind, IFC has deployed its EDGE (“Excellence in Design for Greater Efficiencies”) green buildings program in more than 100 countries. IFC presented on the panel Mobilizing the Building and Construction Sector for Climate Action at the first-ever COP Buildings Day, to make a persuasive case to divert construction financing towards green buildings. At the event, green building councils around the world made an unprecedented commitment for 1.25 billion square meters of buildings to be certified as green in the next five years. Pledges by Peru, Brazil, South Africa and the U.S. Green Building Council identified EDGE as a solution for reaching their targets. In response to the Paris Agreement, IFC will work closely with both public and private sector clients to support them in attaining their Nationally Determined Commitments (NDCs) through emission reduction strategies in the building sector and beyond.

COP21 re-confirmed the need to mobilize at least $100 billion per year from public and private sources to help developing countries mitigate and adapt to climate change by 2020. In this context green bonds have already proven to be an effective financial instrument capable of raising billions in climate finance. With the green bonds market having more than tripled last year to about $36 billion, IFC has to date issued close to $4.5 billion in green bonds in multiple currencies and has valuable lessons to share from its experience.

A price on carbon creates the foundation for carbon markets so countries and companies can reduce their greenhouse gas emissions most cost-effectively. There was great recognition of this during COP21 and furthermore, the agreement reached in Paris acknowledged that markets are needed to get countries on a low-emissions development pathway and enhance ambition to keep warming to well below 2 degrees. IFC, as part of the World Bank Group, continued to engage in this area on several fronts.

IFC supported the launch of the Carbon Pricing Leadership Coalition, a public-private initiative of over 21 governments and 90 businesses that are working together to solve the key political challenges to effective carbon pricing.

Noting the enormous need for mobilizing private sector resources to meet the climate finance gap, IFC actively engaged in two other important results-based finance initiatives that have the potential to leverage considerable capital. IFC participated at the World Bank-led launch of a report with lessons learned from the first successful auction of the Pilot Auction Facility for Methane and Climate Change Mitigation and announced the details of the next auction in Q2 2016. There is much interest and demand for replicating and scaling up this innovative mechanism in other sectors, like gas flaring and abatement of nitrous oxide. The first auction that took place in July 2015 was focused on waste management and awarded put options worth more than $20 million to 12 private sector companies. As part of its work to enhance carbon markets, IFC is also supporting the design of the recently launched World Bank–led $500 million Transformative Carbon Asset Facility (TCAF), an initiative to help developing countries implement their plans to cut emissions by working with them to create new classes of carbon assets, including those achieved through policy actions. This facility will complement WBG financing and programmatic / sector approaches undertaken by IFC can also benefit.

The Paris climate conference brought into sharp focus the hazards of runaway climate change. It is a fundamental threat to economic development in our lifetime and, left unchecked, could push 100 million people into poverty by 2030.

The private sector will play a critical role in building an alternative future, but it will need strong policy signals from governments, removal of exiting regulatory barriers, and creation of a stable environment in which the private sector climate investment will thrive.

There is ample momentum coming out of Paris for the private sector to increase action and ambition on climate change. Companies will be augmenting and implementing their own commitments to decarbonize. They can contribute to the national commitments made by the countries in which they operate.

IFC is ready to be a solutions provider in implementation of the Paris Agreement, by continuing to invest directly in critical climate-smart solutions across the emerging markets, mobilizing billions of co-finance needed from other investors through innovative financial products, and catalyzing additional action through transformational initiatives that increase ambition in targeted ways.

In the coming months, the IFC will finalize its contribution to the World Bank Group’s Climate Change Action Plan, the mechanism by which the institution will reach its commitment to increase climate finance to 28 percent over the next five years.. The goal is to strategically place finance to allow the private sector to scale up climate-smart investments. Responding to climate change is not only the right thing to do, but it also makes good business sense.