However, growth over the past decade has primarily benefitted the richest 20% and left behind the remaining 80% of the population—that is more than 205 million people.

Rasma, who sells ice on a cart in the country's capital, is among those who are still left behind. Despite working from 4am to 10pm every day, Rasma still finds it difficult to make ends meet in supporting his family.

"I see that Jakarta has developed in the last few years, but I haven't developed at all," he said.

The Indonesian people are concerned that inequality is climbing fast

Indonesia's level of inequality is now considered to be relatively high and climbing faster than most of its East Asian neighbors.

Between 2003 and 2010, consumption per person for the richest 10% of Indonesians grew at over 6% per year after adjusting for inflation.  But for the poorest 40%, consumption grew by less than 2% per year.

Indonesians are concerned. A 2014 survey on public perceptions of inequality report that most Indonesians consider income distribution in Indonesia to be "very unequal" or "not equal at all"; these respondents are urging government action.

"I feel conditions now are unfair," said Nandang, a casual agriculture worker. "The poor continues to have a hard life, while those who are already rich can easily get richer. If the government can do something to help, I would love to get a decent job."

Indeed, the consequences of doing nothing may be grave: a likely slowdown in economic growth and poverty reduction, compounded by increasing risk for conflict.

61% of respondents are willing to accept lower economic growth in exchange for lower inequality.

" I feel conditions now are unfair. The poor continues to have a hard life, while those who are already rich can easily get richer. If the government can do something to help, I would love to get a decent job. "

The government has laid out targets in the current Medium Term Development Plan for reducing the Gini Coefficient, down from 41 to 36 by the year 2019.

In order to successfully achieve these targets, Indonesia must address the four main drivers of inequality in Indonesia:

High inequality is not inevitable. Public policies can help Indonesia to break the intergenerational cycle of inequality, by tackling those drivers of inequality.

For example, Brazil’s Gini coefficient fell by 14 points after a concerted effort to reduce inequality through fiscal policy. In contrast, based on 2012 data, Indonesia’s fiscal policy only reduced the Gini by 3 points.

Options of government action for Indonesia include:

There is strong public support for social protection policies that provide direct assistance to the poor and near-poor. More than half of survey respondents believe poverty can be caused by factors beyond an individual’s control, such as coming from a poor family or having bad luck. Nearly half of all respondents support social protection programs as a key policy measure. 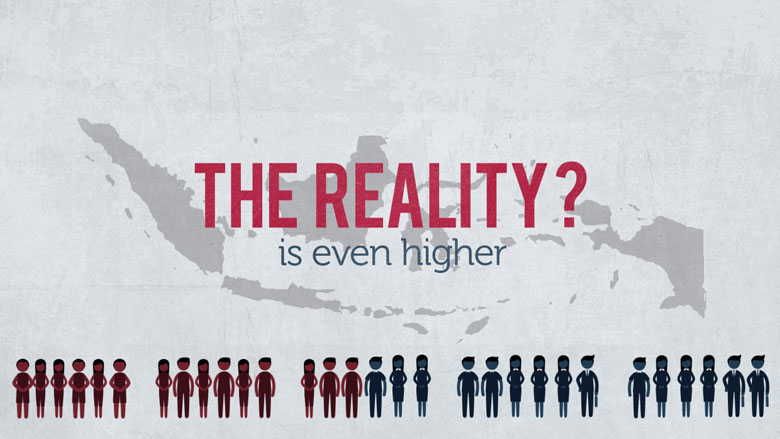