In Sri Lanka, Directors of the Board for Three Days 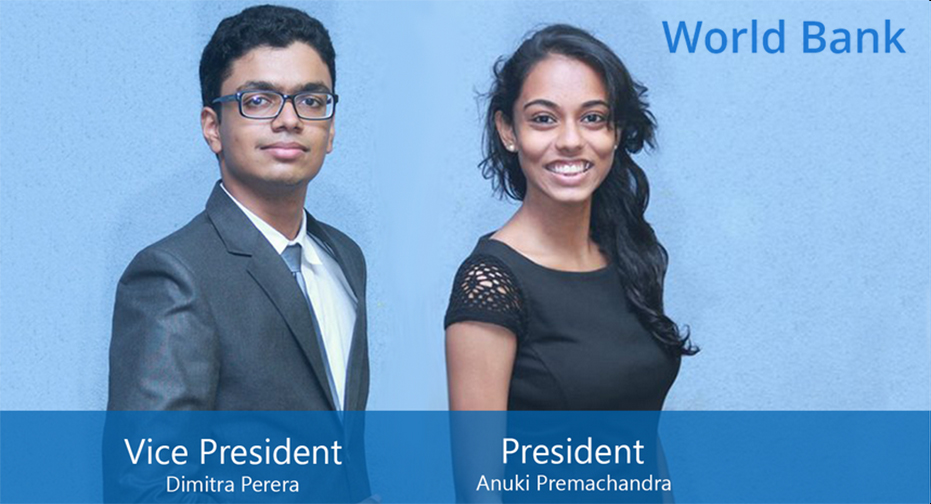 Participants, who had researched development operations, challenged each other to shift policy and become the change they want to see in the world.

Anuki Premachandra, a 17 year-old student from Sri Lanka, was selected as president of the World Bank. She is the first female and, by far, the youngest candidate to reach the coveted position.

Premachandra’s appointment on August 14, although fictitious, was part of the Sri Lanka Model United Nations (SLMUN), Asia’s largest student-run conference. The three-day event is an opportunity for student participants to think critically and strengthen their leadership skills through real-life diplomacy and negotiations. The theme of this year’s conference was shifting policy paradigms with “dare you to move” as the slogan. It championed the World Bank’s safeguards policies and promoted entrepreneurship through a fictional project. Over 1,000 students from Sri Lanka and abroad participated after more than eight months of preparatory work.

Twenty-five individuals, ages 12-18, represented different countries and regions on the World Bank Board of Directors to assess the viability and effectiveness of safeguards policies and deliberated over a fictional project on youth entrepreneurship in Sri Lanka. The sessions exuded youthful enthusiasm and passion for development as students were encouraged to think differently and take intelligent risks. Participants, who had researched development operations, challenged each other to shift policies and become the change they want to see in the world.

How did it all begin? A few months ago, the students approached Françoise Clottes, country director for Sri Lanka and the Maldives and invited the Bank to participate in the conference. Not only did she accept, she extended Bank team support for the students to learn more about our operations. Clottes presided over the inaugural session where she emphasized the need for safeguards in Bank operations while de-mystifying misconceptions with practical examples. She outlined the need for entrepreneurship to reignite the engine of growth in Sri Lanka and challenged youth participants to think boldly and be inspired by young entrepreneurs from around the world and from Sri Lanka who have made their names known world over. Citing the conference’s theme, Clottes concluded her remarks with by “daring” participants to move, to be challenged, to innovate.

During the debates, participants immersed themselves in their roles as country delegates and demonstrated deep knowledge of the issues.

Mokshana Wijeyeratne, from the Colombo office safeguards team was surprised and inspired by her experience interacting and coaching youth. “Our future is in safe hands! Interacting with the delegates at SLMUN was an enriching experience. I am extremely happy that the younger generation is now more conscious of global development challenges, especially how safeguards ensure that development is environmentally sound,” Wijeyeratne said.

President-elect Anuki Premachandra may have to wait a few more years before presiding over World Bank board meetings, but she gained valuable negotiation skills and understood more about the complexities of fighting poverty. “Working with the World Bank in the simulation has greatly educated me on concepts like social safeguards, environmental protocols and indigenous people policies,” she said. “The top lessons I have gained are understanding how policies are made and implemented, identifying various issues that have an impact on our daily lives and how projects are carried out.”