Philippines: A Decade of Building the Foundations for Peace

Women play a vital role in ensuring the success and sustainability of projects under the Bank-managed Mindanao Trust Fund (MTF) to assist the socio-economic recovery of conflict-affected communities in Mindanao in southern Philippines.

Decades of violence left a legacy of poverty and social tension in the conflict-affected areas of Mindanao in southern Philippines. But in hundreds of villages like Bongabong, the Mindanao Trust Fund-Reconstruction and Development Program (MTF-RDP) has been working to promote social cohesion between Muslims, Christians and Indigenous Peoples – building a foundation for peace.

Since 2005, the MTF-RDP has provided intensive financial and technical support to help develop the BDA as an institution. Beginning as a group of volunteers with little or no development experience, most BDA personnel were medical doctors, unfamiliar with the world of local planning, community organization, procurement, financial management and institutional development.

In the initial years the program progressed slowly and deliberately. Capacity was built was not through lectures and training but by doing. The MTF started operations on the ground in six pilot villages, following the community-driven development (CDD) approach.
“When the Bangsamoro Development Agency came to our place, we were worried that they would recruit us – an Indigenous Peoples community – as combatants. This was not the case. They guided us on the community-driven development process from planning to implementation. The BDA visited us regularly. I would like to say that we have become friends,” said Rolando de la Cerna, Indigenous community leader, Bongabong village, Compostela Valley.

CDD puts communities at the heart of development, empowering them to analyze their own development challenges, identify solutions and then implement, operate and monitor their own sub-projects such as access roads, water systems, post-harvest facilities and community centers.

The community-driven approach was consistent with the MILF’s grassroots perspective on development. It also helped the BDA learn the real challenges of delivering development on the ground. As the Chair of the BDA Board, Dr. Saffrullah Dipatuan observed, “This gave us the advantage of knowing the actual condition of the community.”

A decade on with the support of the MTF and other partners, the BDA is now established as a leading development agency for the Bangsamoro people, with over 300 staff operating in seven regional offices across Mindanao.

It has delivered services to hundreds of thousands of people. And it has prepared the Bangsamoro Development Plan, a comprehensive economic blueprint for the Bangsamoro region. As Dr. Dipatuan remarked, “The MTF was able to build our capacity to fulfil our mandate to participatively determine, lead and manage relief, rehabilitation and development in conflict-affected areas in Mindanao.”

At its core though, the MTF-RDP has been about building understanding and supporting economic opportunity and access to services at the grassroots level. As Marina Sioson, also a resident of Bongabong recounted, “My husband who is in the Army, did not want me to be part of the [project], because he said the Bangsamoro Development Agency will convert us into Muslims. I joined just the same because I was curious. The BDA’s Values Transformation Training did not preach Islam but rather discussed values that I as a Christian shared. The sessions allowed us to ask questions about their customs and they asked about ours. In the end I realized we were all the same, wanting better things for our family and our community.” 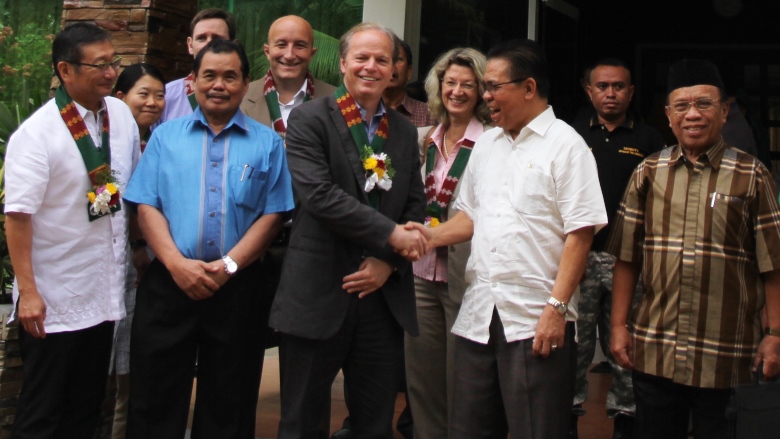 Philippines: The Path to Peace