A Brighter Future for Morocco’s Interior Powered by the Sun

Three remote towns at the foot of the Atlas mountains—Erfoud, Missour, and Zagora—will have a more reliable supply of power.

About 120,000 people living in and around three remote towns at the foot of the Atlas mountains—Erfoud, Missour, and Zagora—will have a more reliable supply of power when a project to install solar photovoltaic (PV) plants moves ahead in the stretches of stony desert that surround them. Located far from Morocco’s main power stations on the Atlantic and Mediterranean coasts, voltage in this region is often so low and unstable that light bulbs dim, computer screens flicker, and hospital equipment malfunctions. This new—and clean—supply of power will be able to add generation capacity, while preventing sharp drops in voltage, as well as power outages.

These will be Morocco’s first mid-size, decentralized solar PV plants. Solar PV modules convert solar irradiation into direct currents of electrical power. Although cheaper to install than Concentrated Solar Power (CSP) plants, the storage options for solar PV are much more expensive. Therefore, at utility level, PV plants do not usually store power for later—for example, for use at night or on cloudy days. So because of the way it works, and because of the short time between generating and distributing the electricity it creates, solar PV is most often used to generate power close to where it is needed.

Globally, in terms of installed capacity, solar PV is now, after hydro- (water) and wind power, the third most important source of renewable energy. However, Morocco has only 20 megawatts (MW) of solar power in operation from a hybrid plant in Ain Beni Mathar in eastern Morocco, which uses combined energy generated by both solar and natural gas. A 160 MW CSP plant is also in an advanced stage of construction, and another project is being finalized for a 350 MW CSP plant. These CSP projects have all been funded by the World Bank, in collaboration with the Global Environment Fund for the Ain Beni Mathar hybrid plant, and with the Clean Technology Fund for the two CSP plants.

Along with CSP, Morocco’s state-owned electricity and water company, Office National de l’Electricite et de l’Eau Potable (ONEE), is committed to installing 400 MW of solar PV as part of its national goal of generating 2,000 MW from renewable energy by 2020. The current PV project, also funded by the World Bank, will contribute 75 MW to that goal.

" A more reliable supply of power will bring significant benefits to the local population. "

Why, though, is Morocco turning to solar PV when up until now it has focused on expanding CSP? “The two technologies complement each other,” said World Bank Energy Specialist, Roger Coma-Cunill. “While CSP responded to a need to cover the evening peak demand when people come back from work, in this case there was the need to address a new daytime peak. This is a new phenomenon in Morocco, essentially driven by economic activity and compounded by a rise in the use of air conditioning, mostly during the day in spring and summer, and particularly in very hot, remote areas of Morocco.”

Erfoud, Missour, and Zagora are already connected to the national grid, but suffer from a lower quality power than towns closer to Morocco’s coasts, because the power transmission lines reaching them are hundreds of miles long. Installing local power plants much closer by will boost their voltage and reduce blackouts. A social study, conducted as part of the project, highlighted local issues related to the poor power supply. In each of the three regions, the unreliable power supply was affecting medical equipment, including X-ray machines and equipment in operating rooms, delivery rooms, and intensive care. In Missour, hemodialysis machines (used for renal failure) could not work all the time without the back-up of expensive diesel generators bought especially for the purpose. While not specifically designed for the health centers, the solar PV project will be of help to them and, also, to local schools, where poor power sometimes leaves children exposed to severe winter cold and summer heat, as well as making it impossible for them to use school computers as often as they’d like.

To date, limits to the main power supply has meant ONEE’s local branches have had to turn down requests to provide extra electricity to local business people working in agriculture, tourism and crafts. This has hindered local economic development. The three towns have been included in national cross-sector projects, such as the National Initiative for Human Development and the Green Morocco Plan (Plan Maroc Vert), which aims to increase agricultural productivity and agricultural employment. An improved energy supply will be essential to helping meet their goals.

Besides supplying the towns close by, the solar PV plants will reduce ONEE’s losses of electricity. “If there is less need for transporting electrons a long way along some power lines,” added Coma-Cunill, “you save energy. This improves the overall efficiency of the system.” Developing solar makes Morocco less reliant on the fluctuating price of the fossil fuels it imports, too. “There is a very strategic sense in Morocco of diversifying energy sources,” said Coma-Cunill, “and a clear sense, with all these targets to reach by 2020, of adding to a green growth plan and being a model for Africa. Morocco is trying to be a gateway to Africa. That’s part of this endeavor.” 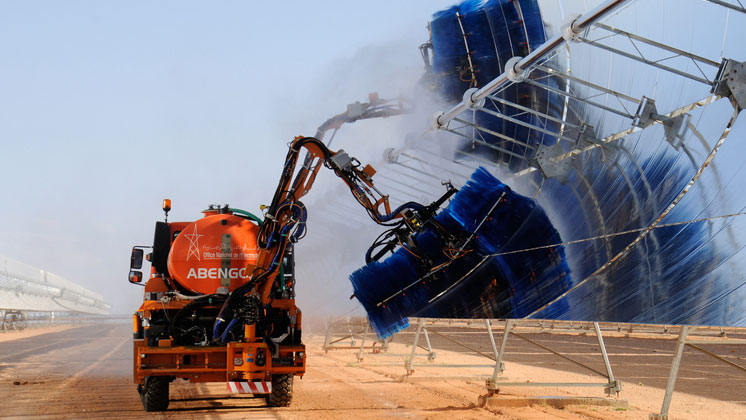