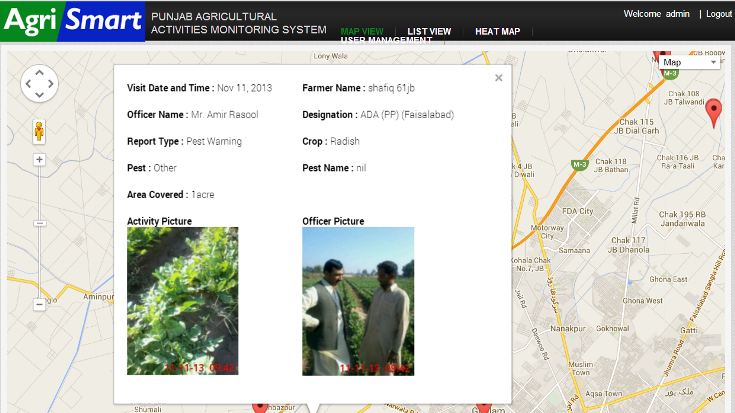 An agricultural field monitor uploads a picture of himself and spotted pests on crops using a smartphone. This data is used to ensure visits happen and create easily-accessible time and spatial data.

“They treated us very well; they didn’t ask for any bribes. Their behavior was very good,” reads a text message from a resident of Toba Tek Singh, a district in Punjab, Pakistan’s largest province. The sender had visited a government-run emergency room the day before and was responding to an automated message sent by the government of Punjab to track service delivery quality.

With technical assistance of the World Bank and support from the Department for International Development’s (DFID) Sub-National Governance program, the provincial government, responsible for over 100 million of Pakistan’s 180 million people, has been using mobile phones to tackle some of the most prevalent grievances citizens have against the government – poor service delivery and corruption.

Direct feedback from citizens is gathered thanks to the Citizens Feedback Model. Shortly after using a government service, the user receives a phone call followed by an SMS seeking his/her feedback.“Dear citizen, did you experience any corruption when obtaining your driving license yesterday in Lahore?,” reads a typical text message. Responses from users are logged into a central database, and the data then analyzed and mapped. Call centers have also been trained to contact those who do not respond or are unable to read the text due to illiteracy. More than three million users of public services have so far been contacted since the summer of 2012, with both positive and negative feedback. “Sir, we went to the hospital yesterday. They asked for 1500 rupees [in bribes]. We didn’t have the money so we left,” reads one of the reports about a hospital in Lahore, the provincial capital. The feedback is actively monitored by the office the Chief Secretary – the top civil servant in the province – to manage the performance of officials.

These applications are expanding to improve other services as well. In Pakistan, as in many other developing countries, absenteeism is a serious problem for improving quality of service delivery - the rate of absenteeism for doctors, for example, is close to 50%. Anecdotal evidence suggests that absenteeism is even higher for field workers, who are more difficult to monitor than those posted to stationary facilities. Visual analysis of activities performed by agricultural extension workers suggests that farmers away from the roads receive far fewer visits.

The Monitoring the Monitors Program, seeded by a World Bank Innovation fund grant and scaled up by the International Growth Centre, uses smartphones to tackle this problem. Health inspectors are given a smartphone and log the results of their visits to health facilities, including a photo to prove that it happened at the said time, allowing for both live time and spatial monitoring, completing the accountability loop. The Punjab Information Technology Board (PITB), the information technology arm of the government of the Punjab deployed smart phones successfully last year in fighting the dengue epidemic that hit Lahore in the summer. City workers were given smartphones to upload and geotag pictures of their anti-dengue tasks which allowed both a visualization of where larvae where, as well as ensure they did their jobs. The visualizations were also publically available. Compared to 2011, when over 21,000 people contracted the virus, 2012 saw just 255 cases in the city of 10 million people.

" Sir, we went to the hospital yesterday. They asked for 1500 rupees [in bribes]. We didn't have the money so we left. "

Cellphones are not only being used to reduce absenteeism among frontline service providers, but also to monitor government interventions, improve coordination and results on the ground. Thus, Lahore’s police uses smartphone applications developed in this program to analyze crime hotspots; agriculture extension workers report their activities; and waste management companies use the apps to report cleaning activities. PITB is continuously building new applications for more and more sectors, particularly with a focus on making them accessible to those with limited literacy of smartphones.

These initiatives are also creating a large pool of reliable data for the government to better spend its limited resources. With the recent approval of the Punjab Public Management Reform Program, these efforts are being scaled up, with added innovation. This project uses the Bank's new Program for Results (PforR) instrument, which links disbursement of funds to development results rather than inputs and is the the first PforR project in Public Sector Governance in the World Bank Group, and also the first for any sector in Pakistan. This innovative financing instrument enables focus on behavioral changes of civil servants, representing a departure from more traditional 'capacity-building' exercises. Proactive beneficiary feedback techniques employed by the operation will also facilitate sustaining such reforms.

Leading the project are Zubair Bhatti and Ana Bellver Vazquez-Dodero, Senior Public Sector Specialists at the World Bank, who emphasize the focus on results this new project has as well as its multi-sectoral approach to achieve those results, with interventions in a wide range of services delivered by government including education, health, livestock, and agriculture. Leveraging the Punjab government’s solid track record of governance reforms, this intervention will deploy 15,000+ smartphones to further increase transparency, citizen access to information, and improve data collection while fostering a results culture in the government. This project will also mainstream geotagging of development schemes for improved transparency and spatial planning.

This model of innovative and sophisticated mobile governance is almost unprecedented in the public sector in developing countries, and represents one of the largest-scale attempts to hear from citizens to crack down on corrupt and poor performing officials. The successes of these initiatives over the past few years show how new technologies can be used to reshape citizen-state relations, empowering the former to improve the latter, and importantly, how the World Bank Group can be at the forefront of these innovative efforts. “Sir! We tribute and salute you. We feel so easy in this system...Thanks a lot sir,” says an SMS response from a Rawalpindi citizen grateful for a state trying to respond to citizen needs. 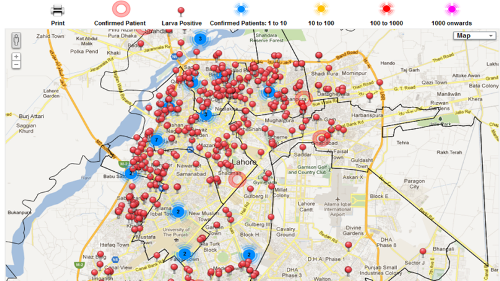