In Benin, Grandmothers Lead the Fight against Malnutrition 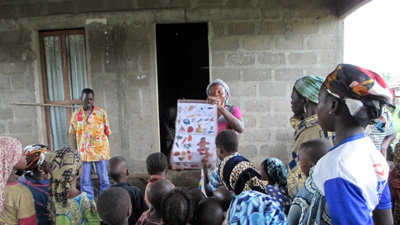 COTONOU, October 4, 2013 - In Benin, the government has enlisted a powerful ally to combat malnutrition. In communities where chronic malnutrition rates are particularly high, grandmothers have been marshaled to keep a watchful eye on the health of young children and to educate the whole village about the importance of proper nutrition.

This innovative strategy is part of the Community Nutrition Education Project (Projet pédagogique de nutrition communautaire, or PNC) launched in January 2012 with World Bank assistance. Implemented by local nongovernmental organizations (NGOs) under the aegis of Plan Bénin, an international humanitarian NGO focused on children, this project is a major asset to the community. A total of 12,607 grandmothers have received training in the health and well-being of pregnant women and young children. Their mission is to convince the entire village of the need to adopt sound nutritional practices.

“The training allowed us to better understand the nutritional value of local food. For example, moringa and baobab leaves, powdered and added to baby food mash, are very nutritious,” states Marguerite Hlanon, who heads the food and nutrition oversight committee of Awamé 1 village in Athiémé, a commune (group of small villages) in the southwestern part of the country. “We also received training on the role of hygiene in nutrition. Since then,” she adds, “the number of health center visits has dropped, because our children don’t get sick as often.”

" The training allowed us to better understand the nutritional value of local food. For example, moringa and baobab leaves, powdered and added to baby food mash, are very nutritious "

Head of the food and nutrition oversight committee of Awamé

The project is part of the Strategic Development Plan for Food and Nutrition established by the Benin government in 2007. With chronic malnutrition among children under age five worsening in Benin ¾ having risen from 39 percent in 2001 to 43 percent in 2006 ¾ the authorities made it a key priority to combat nutritional inadequacy. Supporting the government’s efforts in this area, the World Bank invested in the project CFAF 1.4 billion (with financing from the Japan Social Development Fund), with the chief aim of deploying innovative methods to improve the nutritional picture for young children in the country’s 10 poorest rural communes.

PNC outreach is not limited to grandmothers—17,823 mothers received training on the benefits of exclusive breastfeeding. The project restored nutritional health to 5,485 children between 0 and 59 months plagued with moderate malnutrition and 222 additional children suffering from acute malnutrition.

Says Joseph Hessou, the national coordinator of the nutrition group in the Ministry of Agriculture, Livestock and Fisheries, “The educational value of this project is that we could pilot a number of activities on a small scale” (community-based organization, mobilization of grandmothers, role of communes, etc.) to test the implementation approach at the community level, lending impetus to the reform process and helping to mobilize all actors. “Better still, the innovative approaches, identified and scientifically tested, will serve as a basis for scaling up the results to the country’s 77 communes,” he states.

Encouraged by the results of this project, the World Bank is planning a multisectoral food, health and nutrition project with US$20 million (almost CFAF 10 billion) in funding, expected to be launched in April 2014.

For Jean Cokou Tossa, technical agricultural adviser to the president of Benin and chair of the Food and Nutrition Council, “The initiatives under way in Benin should be stepped up, to reach our common goal of eradicating hunger and significantly reducing chronic malnutrition, in order to achieve our vision of Benin as an emerging country where everyone enjoys adequate nutrition and participates fully in development.”