Key design features of CDD programs include annual block grant allocations to communities for typically three to five years; a strong emphasis on capacity building of the communities; support for communities throughout the CDD cycle; an open menu of options where communities can choose whichever investment addresses their priority needs best; and information about the project that is clear, accessible to community members, and available in the local language(s). Communities also decide on which investments are not eligible, such as projects with a detrimental impact on the environment.

Experience with CDD programs around the world demonstrates that these programs can operate in difficult places (when others cannot) and generally have a positive impact on communities.  They also help build social cohesion and trust within communities and can be used to target the most vulnerable groups in a community.  CDD projects can bring about positive change in local governance and enable greater transparency and accountability. In addition, these provide local infrastructure in an efficient and cost-effective way.

The World Bank has over 25 years of experience in implementing CDD programs. This approach is now applied in over 90 countries, such as Afghanistan, Brazil, Colombia, and India. Since 2001, the World Bank has approved over 750 projects using a CDD approach, either wholly or in some components. The value of these projects is over $23 billion. In the East Asia and Pacific Region, the World Bank is currently preparing CDD projects in Indonesia, the Philippines and Vietnam. In Indonesia alone, where the national CDD program covers all of the country’s 63,000 villages, the World Bank has invested close to $3 billion in CDD since 1998.

The two grants for Myanmar are for two separate CDD projects: an $80 million project which would be implemented in select townships in all of the country’s regions and states, and a $5 million project that would provide additional assistance to communities affected by conflict. In the conflict-affected areas, the World Bank would support communities only when all sides are in agreement.

There are some similarities and differences between the two grants. Both projects would implement a CDD approach to people-centered development that could be scaled up to full national coverage at a later stage if it proved successful. Moreover, consultations with communities and other stakeholders are an integral part of both project cycles. However, the flow of funds for these projects differs. For the $80 million grant, funds would flow from the union government directly to the communities. For the $5 million grant, funds would flow from a non-governmental organization through community-based groups that are trusted by the communities. The World Bank aims to bring the $80 million grant to its Board of Directors for approval on October 2012. The design of the $5 million grant would build on the lessons from the pilot projects that are currently underway in the conflict-affected areas under the Myanmar Peace Support Initiative. 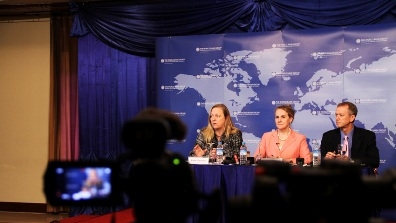