Nepal: Moving Toward a Better Future for All 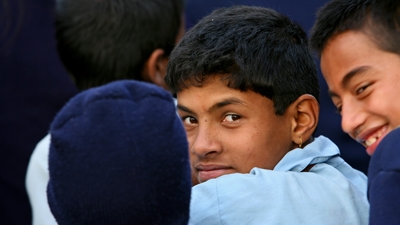 Nepal is passing through a difficult and prolonged transition, which at the same time, presents to its people an opportunity to build a stable and peaceful nation that is inclusive, prosperous and accountable.

The World Bank in Nepal is helping to address key elements of this peace process, including the foundations for state building, growth, and improved basic service delivery for Nepal’s poor.

On June 27, 2011, the World Bank and the Government of Nepal signed agreements totaling US$116 million paving the way for four key projects which will address some of the major development challenges the World Bank is helping Nepal to overcome.

As Nepalis move in unprecedented numbers into towns and cities, the need for rapid economic development, improved standards of services and better infrastructure is also increasing. The Urban Governance and Development Program: Emerging Towns Project will address these challenges by helping to improve the basic delivery of services and priority infrastructure in six key municipalities – Mechinagar, Dhankuta, Itahari, Lekhnath, Baglung and Tansen. The project will also support institutional development activities, promoting a strong and inclusive local government system, and, in the longer term, helping to move towards a just and equitable state.

While the country has a vibrant workforce, nearly half of the workers have never attended school. Few jobs are available domestically, and Nepali workers migrate out of necessity than by choice. A third of the working male population is already believed to be abroad and they remit a staggering 25 percent of the GDP or maybe even more. But most Nepali migrant workers are poorly skilled and thus they end up with low paying jobs. The Enhanced Vocational Education and Training (EVENT) project will help improve access to Technical Education and Vocational Training programs especially for disadvantaged youth. The project will help approximately 75,000 Nepali youth get access to short-term skills training, technical education, and opportunities for certifying their existing skills. Special attention will be given to lagging regions, poor youth, women, and youth belonging to Dalit, Janajati and other marginalized communities, as well as persons with disability.

Insufficient and costly electricity is a major constraint to the economic and human development of the country. In response to the dramatic worsening of electricity supply in 2008, the Government of Nepal approved an Electricity Management Plan, in which the Kabeli Transmission Project was identified as one of the priorities. The Project will construct a 132 kV transmission line in eastern Nepal that will open up the extreme east of Nepal for power sector development and shorten the distance required to transmit electricity to the country’s main industrial center around Biratnagar. The transmission line will also facilitate efforts by Nepali private hydropower developers to arrange financing for their projects, as generating projects must have a credible plan for transmitting power. This Project is a continuation of the World Bank Group’s deepening engagement in Nepal’s power sector which includes projects in cross-border electricity transmission, renewable energy and small hydropower generation. Together with the Emerging Towns Project, these new undertakings will help maximize the benefits of urbanization and revive economic activity by removing barriers to growth.

Nepal’s biodiversity is extremely important for the country’s economy as well as the well-being of its people. Protecting the wildlife and their habitat has numerous benefits in protecting livelihoods as well as in the potential of promoting ecotourism. However, pressures such as deforestation, habitat loss and poaching of wild animals have put the environmental and ecological balance under severe threat. The Strengthening Regional Cooperation for Wildlife Protection in Asia is a regional project that will address the cross-border illegal wildlife trade through regional cooperation and capacity building and support the country’s initiative for habitat protection and management for wildlife in general and tigers in particular. The project will enhance sustainable development while promoting ecotourism, which has become the fastest growing and most profitable segment of the tourist industry.