Traditional funding sources cannot cover the long-term financing that emerging economies need for strategic sector development, particularly infrastructure. As such, developing countries are turning to capital markets to unlock new sources of funding to attract private sector financing, investment and expertise. This discussion will bring together public and private sector stakeholders to address the opportunities and challenges of investing in local capital markets. Examples from developing countries will highlight how innovations can contribute toward growth when governments, private sector and financial markets work together to channel new investment into emerging economies.

Philippe Le Houérou has been Executive Vice President and CEO of the International Finance Corporation since March 2016. His career includes leadership positions at the World Bank and the European Bank for Reconstruction and Development, where he developed and implemented business strategies, and helped increase lending and new partnerships. Prior to his arrival at IFC, Mr. Le Houérou was VP for Policy & Partnerships at the EBRD where he coordinated country strategies, restructured and redefined EBRD’s approach to policy dialogue, and led other initiatives to support private sector development and transition mandate. Before joining EBRD in 2015, he was World Bank Regional VP for the South Asia Region where he designed a new regional strategy, restructured the Bank’s portfolio in the region to improve performance and more than doubled new lending. Previously, he was the Bank’s Regional VP for Europe and Central Asia, leading the Bank’s effort to mitigate the global economic crisis’s impact on the region and ramping up analytical and advisory work, and new lending. He holds an MBA from Columbia University and a Ph.D in Economics from the Institut d'Etudes Politiques de Paris.

Thomas Silberhorn was appointed Parliamentary State Secretary to the Federal Minister for Economic Cooperation and Development of Germany in February 2014. His work focusses on core development issues for the future: human rights and good governance, education, health, poverty reduction, water supply and sanitation, energy and resources. He also works on globalization and trade issues and the new agenda for the United Nations Sustainable Development Goals. Mr. Silberhorn is Germany's Governor at the African Development Bank, responsible for bilateral development cooperation with Africa, playing a major role in shaping the German government's strategy for the 54 countries of Africa. Another regional focus of his work is on the Near and Middle East.

Alfredo Thorne has been Minister of Economy and Finance of Peru since July 2016. Previously, he was the founder and Director of Thorne and Associates, and Managing Director at the Global Research Department at JPMorgan Chase Bank, where he was responsible for conducting economic research on Mexico and Latin America. He was also a columnist for the bi-weekly Poder magazine published in Mexico City. Latin Finance magazine voted him as the “Best Mexican Economist” in 1997, 1998, 2000 and 2001. In 1997, Time Magazine invited him to join its Latin American Editorial Board of Economists. From 1987 to 1995, Mr. Thorne worked as a Senior Economist for Mexico at the World Bank and as Senior Financial Economist responsible for advising former socialist countries in their transition from centrally planned to market economies. Mr. Thorne was named the best 2016 Economy and Finance Minister in Latin America by leading business magazine America Economia, according to its annual ranking.

Henry Rotich is Cabinet Secretary for the National Treasury in Kenya. He assumed the position in May 2013 following the successful general election under the new Constitutional dispensation. Mr. Rotich is charged with managing Kenya’s national government finances, including spearheading an efficient and sustainable public financial management under a new devolved system of governance. He has been instrumental in prioritizing increasing investment in infrastructure, agriculture, security, education and skills development to raise productivity, as well as improving the business environment to promote investments, consistent with the new Administration’s development agenda. More recently, he led the largest successful debut bond issuance in Africa, where Kenya raised US$ 2 billion to finance infrastructure. The Eurobond was voted best emerging market deal in Africa and third in emerging markets in 2014. Previously, he was Head of Macroeconomics at the Ministry of Finance. Mr. Rotich holds a Master’s Degree in Public Administration from Harvard University Kennedy School, and a Bachelor’s and Master’s Degree in Economics from University of Nairobi.

Donald Kanak is Chairman of Eastspring Investments, the Asia investment organization of Prudential, one of Asia’s leading retail asset managers. He is also Chairman of Prudence Foundation Ltd., the community engagement arm of Prudential in Asia, and Chairman of the EU-ASEAN Business Council. Previously, he was Chairman of Prudential Corporation Asia, and held a number of senior positions at American International Group, ultimately as Executive Vice Chairman and Chief Operating Officer. In 2011-12, Mr. Kanak chaired the World Economic Forum's Global Agenda Council on Insurance and Asset Management and is currently a member of its Council on Southeast Asia. He is a member of the Council on Foreign Relations and Senior Fellow of the Harvard Law School Program on International Financial Systems. He is a Trustee of World Wildlife Fund (WWF)-Hong Kong, and serves on the National Council of WWF-U.S. Mr. Kanak holds a B.A. from University of North Carolina-Chapel Hill, an M. Litt. from Oxford University and a J.D. from Harvard Law School.

Catherine Bouvier d’Yvoire is Managing Director in the Public Sector and Development Organizations coverage group in London in charge of sovereign clients and development organizations with a focus on central banks, ministries of finance and development organizations in Europe and Africa. Her team supports coverage of sovereign clients globally. Mrs. d’Yvoire is the rating advisor to Indonesia, Senegal, Sri Lanka and Sierra Leone. Previously, she was at the Public Sector Group at Citigroup in Paris advising governments on international financial issues such as credit positioning, investor relations, access to capital markets, debt management, and borrowing strategies. She was also at Lazard where she has been advising Costa-Rica, Venezuela, Togo, Senegal and Indonesia. She has extensive experience in sovereign debt management, infrastructure financing, and policy implementation. Mrs. d’Yvoire was awarded the title of Chevalier of the Order of the Legion d’Honneur in 2010. Mrs. d’Yvoire holds an MBA from Harvard Business School, a Masters degree in English from Sorbonne University and graduated from Ecole Superieure de Commerce de Paris (ESCP Europe) with a Major in Finance.

Jan Walliser is Vice President for the World Bank's Global Practices covering Finance & Markets, Governance, Macroeconomics & Fiscal Management, Poverty, and Trade & Competitiveness. He took on his current role in 2015 and is charged with ensuring high-quality lending, analytical and advisory services aligned with country demand and in collaboration with regional teams. Prior to this appointment, Mr. Walliser was Director of Strategy and Operations in the Bank’s Africa Region supporting the Regional Vice President in providing strategic leadership and operational guidance to staff working on 48 countries in sub-Saharan Africa. Previously, he managed a team of economists working on Nigeria and central and western Africa, advising governments on macroeconomic policies and supporting debt relief for several fragile states. Mr. Walliser received a Ph.D. in economics from Boston University and a Diplom-Volkswirt degree from Kiel University, Germany.

Heike Reichelt is Head of Investor Relations and New Products at the World Bank. Her team’s responsibilities include managing relationships with bond investors and rating agencies, and developing new products for investors. These include products for climate change mitigation and adaptation like World Bank Green Bonds, and other products that raise awareness for the Sustainable Development Goals (SDGs). Her team also performs similar functions for the International Finance Facility for Immunization (IFFIm), for which the World Bank acts as treasury manager, and supports international efforts to harmonize impact reporting for investors. Heike plays a key role in the World Bank’s outreach to the sustainable and impact investing community and works with other issuers and market participants to encourage the growth of sustainable international capital markets focused on making a long-term positive social and environmental impact. She has also been a part of the World Bank Treasury's Reserves Advisory Management Program for central banks and has over 20 years of experience in finance – including the areas of export finance and capital markets.

Follow us and join the conversation with the hashtag #CapitalMarkets 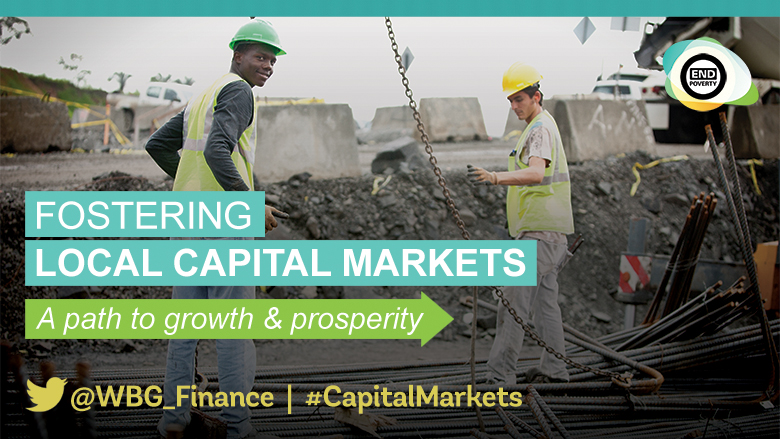