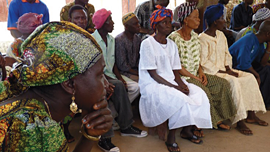 This session will highlight the achievements of one of the JSDF’s projects in Sierra Leone, The Rapid Response Growth Poles: Community-Based Livelihood and Food-Support Program (HABOPE) project by bringing together key stakeholders involved in the project. This seminar will present an overview of the preparation, implementation, and early results, with a strong focus on community driven-development and social accountability as tools to empower whole villages through Cash for Work (CfW) and Food for Work (FfW) mechanisms.

The HABOPE Project, which means “Have Hope” in creole, is an Emergency Window project funded by JSDF to counteract the negative effects caused by the food, fuel and financial crises. These crises have affected the most vulnerable in Sierra Leone where 66 percent of the population lived below the poverty line with less than US$ 1.0 a day (2004 estimates).

The implementing agency, the National Commission for Social Action, and the beneficiaries, who will primarily join the session via video conferencing from their respective project location(s), will address the challenges they faced before the project and describe how the project has succeeded in using CfW and FfW methodologies which are not only generating income but improving food security and supporting livelihoods in a sustainable way.

The Government of Japan and the World Bank established JSDF in June 2000, with the goal of providing grants to support community-driven development and poverty reduction projects that empower and directly improve the lives of the poorest and most vulnerable groups not reached by other programs. A unique and valued feature of the JSDF program is that it provides a platform for cooperation with non-governmental agencies and other local stakeholders in the development process. The Government of Japan has support over 300 social development programs and projects, up to the end of June 2013.