Developing countries are facing a massive infrastructure deficit. Despite robust growth over the last decade, many people in emerging markets and developing economies still do not have access to reliable and safe basic services. The lack of infrastructure comes at an economic and social cost. Today 1.2 billion people live without electricity; 2.8 billion still cook their food with solid fuels (such as wood); 1 billion people live more than two kilometers from an all-weather road; 60 percent of the world’s population lack internet access; and at least 748 million people lack access to safe drinking water.

Developing countries now spend about US$1 trillion a year on infrastructure. Many countries already face large gaps in the stock and quality of existing infrastructure, along with rising demand for services. Just to illustrate one source of rising demand: in emerging economies, the number of people living in cities is expected to double in 30 years to 2030, adding 2 billion more people. With this mass urban migration comes rising demand for basic services such as water, power and transport.

It’s estimated that an additional US$1 trillion to US$1.5 trillion of annual investment in low and middle income countries will be required through 2020 to meet the infrastructure demand from industry and households. Electricity, water, and transport are expected to account for the bulk of future spending needs.

So developing countries need to double spending on infrastructure every year until 2020 to bridge the infrastructure gap. The price tag goes up further by approximately $200 billion a year when you factor in the spending required to reduce greenhouse gas emissions and to adapt assets to the challenges of increasingly volatile climates.

With the research showing that a 10 percent increase in infrastructure investment contributes to one percent growth in GDP, helping countries bridge the infrastructure gap is critical for boosting growth, creating jobs, and delivering on the World Bank Group’s twin goals of ending extreme poverty and boosting shared prosperity.

Faced with a large infrastructure deficit, governments have no way to close the financing gap using public funds alone. Public funding of infrastructure in developing countries accounts for between 70 and 80 percent of total infrastructure spending. The challenges of raising funds for infrastructure projects in emerging markets and developing economies have become particularly acute since the global financial crisis.

Faced with rising demand from developing countries, the World Bank Group’s financing commitments in roads, bridges, power generation and transmission, water supply and sewerage, and other critical infrastructure projects rose by 45 percent to US$24.2 billion in fiscal year 2014, up from US$16.7 billion the previous year.

However, analysis of the World Bank Group’s Private Participation in Infrastructure Database shows that private infrastructure investment in emerging markets has been declining—from $186 billion in 2012 to $150 billion in 2013—which is a 20 percent drop.

The challenge is not a fundamental lack of capital, but rather a shortage of capital willing to invest in the more complex, longer-term and riskier investments that are typical of infrastructure projects in emerging markets and developing economies.

This highlights the need for an innovative new approach, involving the private sector, to mobilize other sources of private financing for infrastructure investment such as from institutional investors—a major source of long-term capital. Currently less than one percent of pension fund assets are allocated directly to infrastructure projects, and the bulk of this is in advanced economies. This represents an untapped market for potential funding in emerging market infrastructure projects.

World Bank Group research shows that private infrastructure investment is very sensitive to country risk. A country’s investment climate—such as its predictable handling of contracts, regulations and prices—are key drivers of the levels of investment in infrastructure.

Reinvigorating the supply of infrastructure in the developing world requires work to establish a more supportive environment for investment. As a background note prepared by the World Bank Group for the G20 explains, governments need to pay more attention to the selection, quality and management ofinfrastructure projects as well as to the quality of the underlying investment climate.

Failing to choose, prepare and develop the right projects means emerging markets face a shortage of investments that are attractive to private financiers—that is, a lack of financially viable projects.

It’s unique because of its partnership approach. The GIF platform offers governments, multilateral development banks, private sector investors and financiers a new way to collaborate on complex projects that no single institution could do on its own.

From the start to the finish of a project, the GIF platform will provide support, drawing on its array of technical and advisory partners, which will include private investors, to ensure well-structured and bankable infrastructure projects are brought to market. Its unique collaborative approach has already won strong support from institutional investors.

Its aim is to provide integrated support—using the wide range of skills and resources from within the World Bank Group and within the public and private sectors—to unlock a credible pipeline of viable and bankable public private partnership projects in emerging markets and developing economies to help meet the infrastructure challenge.

Pipeline of Billions for Developing Infrastructure 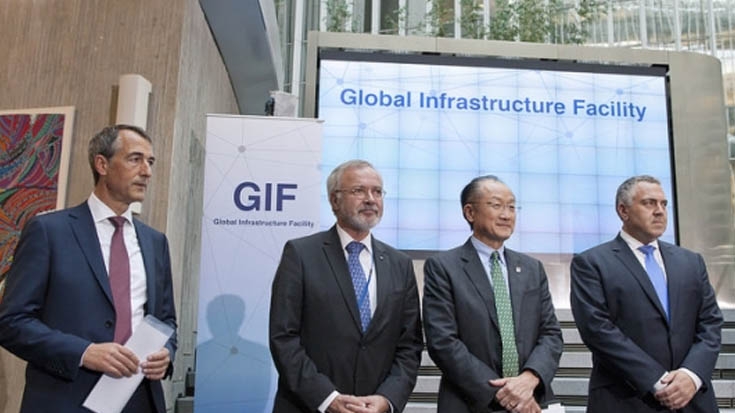 Pipeline of Billions for Developing Infrastructure