This brief pertains to preliminary results of the Sunken Billions Revisited, shared in 2015. For an updated analysis and link to the final report, please see the 2017 Press Release.

In 2009 the World Bank, in collaboration with FAO, published The Sunken Billions: The Economic Justification for Fisheries Reform. By explicitly quantifying the potential economic benefit forgone in global marine fisheries, this publication underscored the urgency of improving marine fisheries governance and generated momentum toward restoring overexploited fish stocks and transforming marine fisheries into a basis for economic growth around the globe.

The World Bank is currently updating the original Sunken Billions estimate, which was based on global fisheries data from 2004. This update is based on 2012 data and uses a refined estimation methodology. The full report is forthcoming, but this brief summarizes preliminary results that have already emerged from the new study.

The Sunken Billions Revisited is based on the same essential methodology as the original study. It consists of three components: 1) a bio-economic model of the global fishery, 2) empirical estimates of the inputs required for the bio-economic model, and 3) numerical procedures for calculating outputs of interest.

The main steps of the Sunken Billions estimation are:

Magnitude of the Sunken Billions

In the process of updating the Sunken Billions estimate, it was found that the original study probably underestimated the biological productivity of the ocean fish stocks and that the fish price used in the estimation was too low. Accordingly, the economic loss in 2004 was re-estimated using revised model inputs and the improved version of the bio-economic model developed for the current update. The preliminary result of re-estimation revealed that the original estimate was too conservative: the estimated Sunken Billions in 2004 is closer to US$72 billion, rather than the US$52 billion originally reported. Expressed in terms of 2012 prices, the revised Sunken Billions estimate for 2004 amounts to US$87 billion.

The preliminary Sunken Billions estimate for 2012 is about US$83 billion (in 2012 prices). This estimate, as is the case for the 2004 estimate, is naturally subject to uncertainty. Considering the uncertainty regarding the available data and bio-economic modeling assumptions, there is a reasonable degree of confidence that the true value falls between US$51 and US$105 billion.

According to the new results, the global marine fishery could achieve its maximum economic potential by reducing aggregate fishing effort by some 44 percent relative to the fishing effort in 2012. This would eventually more than double the fishable biomass and increase the sustainable global marine harvest by almost 13 percent compared to the level in 2012. The recovery of fish stocks would also increase the proportion of high-value fish in the catch, raising the average unit price of fish by about 24 percent.

As illustrated in Figure 1, the largest source of the estimated Sunken Billions of US$83 billion in 2012 is the unnecessarily high cost of fishing due to excessive fishing effort and depressed fish stocks. This single item represents over half of the total economic loss. The reduced average price of landed catch, due to disproportionately diminished landings of high-value fish and reduced quality of landed catch, represents about one-third of the loss; while reduced harvest levels due to reduced global fish populations account for the remainder.

The new study finds that the global marine fishery has registered a modest improvement since 2004. It indicates that the decline in global fish stocks in general has halted and that the status of many fish stocks in 2012 has improved compared to 2004. Healthy fish stocks can increase benefit streams to families and to coastal and ocean economies, and the data indicate that there has been an increase in the net benefit of fisheries since 2004, even though there seem to be regional differences in the trend. The data also indicate a substantial reduction in subsidies paid to the global fishing industry-especially in the developed parts of the globe—contributing further to the improvement of the net benefit of the global fishery; the data also suggest some increase in the taxes the industry pays. As a result, evaluated at the 2012 price level, the estimated Sunken Billions have been reduced by about US$4 billion, from over US$87 billion in 2004 to US$83 billion in 2012.

This progress is illustrated in Figure 2, which plots the preliminary estimates of net benefit and fish biomass of the global fishery in 2004 and 2012 relative to the optimal state. As can be seen in the diagram, 2012 represents an improvement compared to 2004.

Also drawn in the diagram is the adjustment path toward the optimal point suggested by the estimated positions in 2004 and 2012. While the global fishery appears to have moved in the right direction between 2004 and 2012, the speed of improvement has been quite slow. At this rate of adjustment, it will take 60 to 70 years for the global fishery to reach the neighborhood of the optimal point. 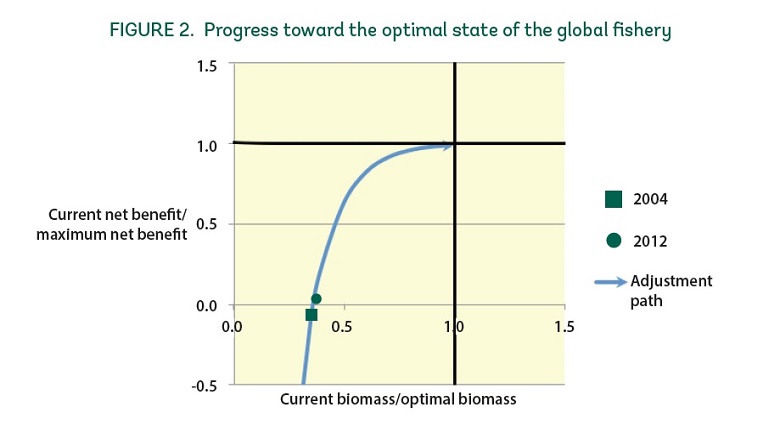 The new study will include analysis of possible transition paths for the global marine fishery from the present situation to its optimal state. Because of the current depressed state of global fish stocks, fully accomplishing this transition will inevitably take decades. Moreover, the current fishery is characterized by excessive fishing capital and manpower. Much of this capital is imperfectly malleable and cannot be rapidly adjusted. Alternative livelihoods to fishing are not readily available, especially in the less developed regions of the world. Fishery transition paths have to take these facts into account and the speed of adjustment also needs to be acceptable to affected individuals and communities.

The table shows the present values of the net economic benefits of the global marine fishery estimated under the three scenarios. These present values also represent the capital value of marine fish resources for commercial use. Also shown in the table is the estimated number of years it takes the fishery to reach the sustainable optimum.

The urgency for action is clear. Even if the world took the most drastic measures to reduce the fishing effort, it would still take 20 years for the currently overexploited stocks to recover and the global fishery to reach the sustainable optimal state. At the currently observed rate of progress, it would take the world 67 years, reaching the optimal state around year 2080. The cost of delayed action is staggering: Compared to the fast path, the present value of fishery under the current path is smaller by more than US$500 billion. The moderate path, which could be attained by moderately accelerating the pace of fisheries reform around the world, would cut the loss in half, reaching the optimal state before or around year 2050.