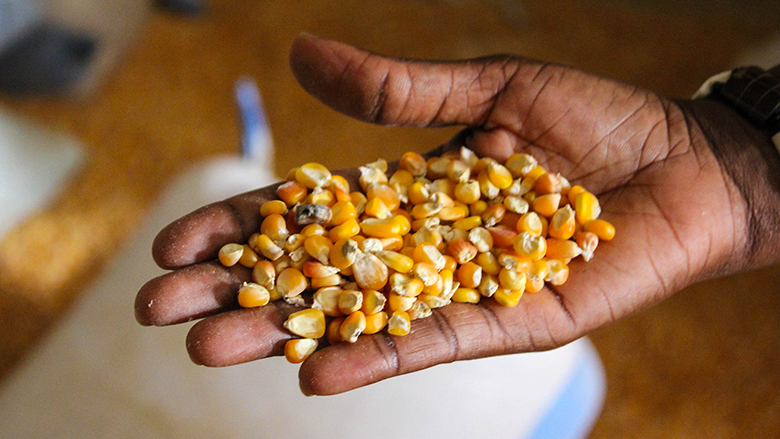 Food demand is projected to rise by at least 20 percent globally over the next 15 years, with the largest increases anticipated in Sub-Saharan Africa, South Asia and East Asia. But natural capital is being depleted at unprecedented rates and climate change could severely cut food production, especially in the world’s most food insecure regions.  2016 estimates found that one in nine people suffers from chronic hunger and in 2014, 12.9 percent of the population in developing countries was undernourished.

Ongoing fragility and conflict, civil insecurity, large-scale displacement, climate-change and natural resource degradation—which are linked in complex ways-- continue to intensify food insecurity for millions of people. Multi-region food crises, which occurred periodically between 2007 and 2012, are beginning to reemerge.

Drought conditions are worsening across several conflict-affected countries. As of March 2017, FAO data identified 37 countries—28 of them in Africa—whose populations are facing food insecurity. In February 2017, famine was declared in South Sudan. There is risk of famine in Ethiopia, Kenya, Northern Nigeria, Somalia, and Yemen.

The World Bank Group works with partners to improve food security and build food systems that can feed everyone, everywhere, every day. Activities include encouraging climate-smart farming techniques, improving supply chains for reducing food losses and strengthening safety nets to ensure vulnerable families have access to food and water.

Expedited emergency support: In response to the 2017 famines, the Bank is working towards a financial package of more than 1.6 billion to build social safety net programs, strengthen community resilience and deliver emergency food and water assistance in affected countries. The Bank is coordinating closely with the UN and other partners in all areas of its response.

In Yemen, a $36 million grant to restore agricultural production systems and improve food security is expected to be in place by June 2017. In South Sudan, a $50 million Crisis Response Window (CRW) grant is under preparation to provide food and nutrition support and lay the foundation for the recovery of agricultural production.

Supporting long-term global food security programs: The Global Agriculture and Food Security Program (GAFSP) fills financing gaps in national and regional agriculture and food security strategies. Ten countries and the Bill & Melinda Gates Foundation have pledged to contribute about $1.6 billion, with $1.5 billion received. Since May 2010, the Public Sector Window has allocated $1.2 billion to 49 projects in 31 countries. More than half of GAFSP projects, for a total of 15% of GAFSP funding, have interventions targeting nutrition-related activities.

High level engagement and analysis: The Bank is engaged in policy dialogue and coordinated activities with countries and development partners to address food security challenges. The Bank contributes to agriculture and food security recommendations for the G20, and supports G20 initiatives such as the Agricultural Market Information System (AMIS), launched to improve the transparency of global agricultural markets of maize, rice, soybeans, and wheat, and make that information publicly available to encourage policy action

With funding from the Food Price Crisis Response Multidonor Trust Fund, the Bank provided technical assistance to over 30 client countries to respond to the impact of El Niño and prepare for future ENSO events.

Supporting research to address critical knowledge gaps: The Bank is undertaking a comprehensive analytical program on food security in collaboration with other agencies working in food and agriculture. The Bank supports the Consultative Group on International Agricultural Research (CGIAR). The Bank is also improving global collaboration around nutrition and all of its underlying drivers, including agriculture, through the SecureNutrition knowledge platform.

In Cambodia, the Bank helped improve food security for 5,000 families between 2008 and 2015, providing land, infrastructure and agriculture services. 260 families now own up to 3 hectares each for crops and livelihoods.

In Haiti in 2016, a quick response to Hurricane Matthew secured over 100 tons of winter bean seed and streamlined a system for providing seeds, fertilizer and plowing services to 3,060 affected farmers, effectively supporting food security of vulnerable people

$1.6 billion in IDA/IBRD and Trust Fund Resources made available through the Global Food Price Crisis Response Program between 2008 and 2015 had a significant impact on the ground. In Niger, rice yields in irrigated plots treated with the recommended dose of fertilizers exceeded the baseline average per hectare (ha) by 116% (5.4 tons/ha versus 2.5 tons/ha), which helped to benefit 33 rice producer cooperatives covering 20,784 farmers. In Nicaragua, school lunches for 609,000 pre-school and primary school children led to higher retention rates in targeted areas.

GAFSP funding in Bangladesh has trained 472 community facilitators and field assistants, who are now working to promote basic nutrition messages in the field.  In Rwanda, over 12,000 kitchen gardens have been constructed and new high yielding and high nutrition crops were introduced including potatoes, and zinc and iron fortified climbing beans.