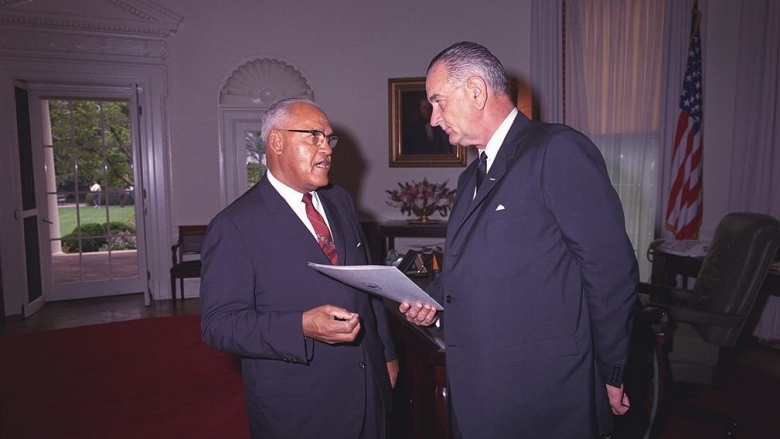 Bertha F. Wilson is an Archivist at the World Bank Group Archives in Washington, DC and has worked at the Bank Group for 21 years. As a member of the Archives’ Access to Information team, she works with external researchers and Bank staff to facilitate access to the Bank’s historical records. What follows is her description of how, in one particular instance, her professional work became personal, where she could “see herself” in the Bank’s history. Written from her point of view, it is published here as part of our celebration of Black History Month. (Above photo features Dr. Patterson and U.S. President Lyndon Johnson in the Oval Office, 1964; Credit: Wikimedia Commons). 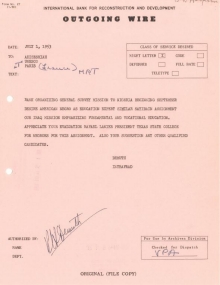 Telegraph from Bank staff Richard H. Demuth to UNESCO official Malcolm S. Adiseshiah. Click to enlarge (1701818).
In the spring of 2018, I reviewed historical records in response to an Access to Information request that concerned the World Bank’s September 1953 General Survey Mission to Nigeria. The mission was the Bank’s first to an African country and ultimately resulted in a report titled The Economic Development of Nigeria (Report Number 11151).

These six words jumped off the page and fueled my own desire to know who was considered and eventually selected for this role, knowing as I did that the successful candidate would have been one of the first African Americans to be employed by the Bank in such a role. As I continued to carefully pour through pastel onion skin pages, my thirst was quenched as I read a July 14, 1953 letter from Patterson H. French, Technical Assistance Officer, to Dr. A. Kazmi, c/o High Commissioner for India. French advises that “we are inviting a leading American Negro educator to join the mission. He appears to have unusually appropriate experience for this particular assignment, including some personal acquaintance with Nigeria”. 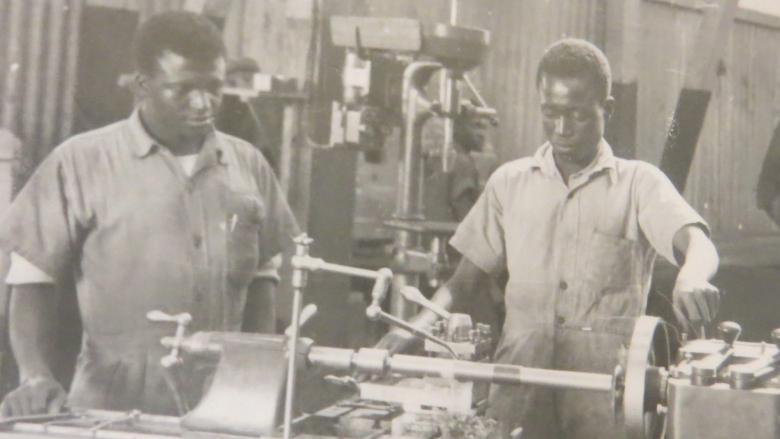 Photo of young men at a Nigerian training center visited by Dr. Patterson and the Bank mission. Click to enlarge (Box no. 6, Frederick D. Patterson papers, Manuscript Division, Library of Congress).
I soon encountered the individual who would ultimately be selected for the position. On July 16, 1953, after consulting with the U.S. Department of State, U. S. Office of Education and others, Mr. Demuth informed Mr. Adiseshiah that the Bank had met with Dr. Frederick Douglass Patterson, “a prominent Negro educator in this country, who has been President of the Tuskegee Institute until recently and is now the Director of the Phelps-Stokes Fund. This organization is, as you may know, devoted to the furtherance of Negro education and has West Africa as one of its fields of special interest.”

While Demuth's July 1, 1953 telegraph contains the first mention of staffing the mission with a “Negro education expert”, the archival records are silent on who initially proposed the idea -- the Bank or the Government. However, the Government of Nigeria did ask the Bank to confirm Dr. Patterson’s heritage in a September 1, 1953 telegraph from A. B. Cox, Development Secretary, Government of Nigeria, to Paterson French that asks “PATTERSON OF AFRICAN DESCENT?” to which French confirms “PATTERSON AFRICAN DESCENT”. 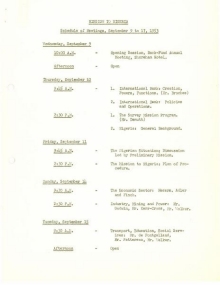 Schedule of meetings for Bank mission to Nigeria. Click to enlarge (1701818).
The mission members convened in Washington where, in addition to preparatory meetings, they attended the opening session of the 1953 Annual Meetings at the Shoreham Hotel. Their preparation meetings continued in New York and then London before arriving in Nigeria. Telegraphs from the Bank to Dr. Patterson’s wife to notify her of his safe arrival in London and Lagos, Nigeria on September 21 and 28 respectively, gave me pause. I have come across many family notifications like these in the Archives’ holdings before, but these felt personal.

Dr. Patterson was a veterinarian and before becoming president of Tuskegee University (1935-1953), he was Tuskegee's Head of the Veterinary Division and the Director of the School of Agriculture at Virginia State College where he also taught veterinary science. In 1944, the same year that the World Bank was created to finance reconstruction and development, Dr. Patterson co-founded the United Negro College Fund (UNCF), an organization whose initial concern with funding Historically Black Colleges and Universities (HBCUs) and support of Black college students has extended to help fund Native American, Latino, and Asian underrepresented scholars. During the mission it was through these academic and philanthropic lenses that he would have examined Nigerian schools, especially those charged with veterinary and agricultural sciences training and provided his advice and expertise.

Dr. Patterson's diary of his Bank mission to Nigeria (available in its entirety at the bottom of this page) is contained in his personal records preserved at the Library of Congress in Washington, DC. An entry from Oct. 6, 1953 with a photograph captures his visit along with fellow mission members, including Hugh C. Trumble, mission advisor on agriculture, to the Forestry Station at Ibadan. One can deduce that Patterson and Trumble’s shared agricultural experience did much to inform their analysis. The same may be said about Patterson’s exchanges with Neil R. Reid, consultant on Animal Husbandry, which are also described in his diary. 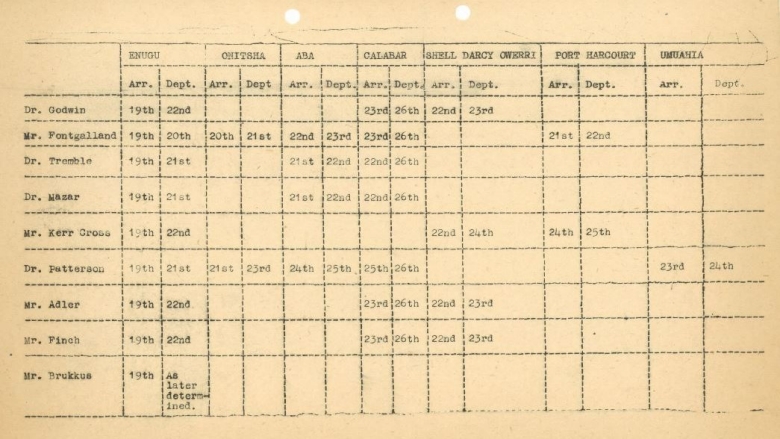 Patterson, like me, is not only Black but also a native Washingtonian from a historically Black neighborhood, so in him I see myself living on the pages of 1950’s era World Bank archival records. I did not realize how much I missed the presence of Black Americans in the early history of the World Bank until the records revealed Dr. Patterson, which gave me an opportunity to see and learn about him. 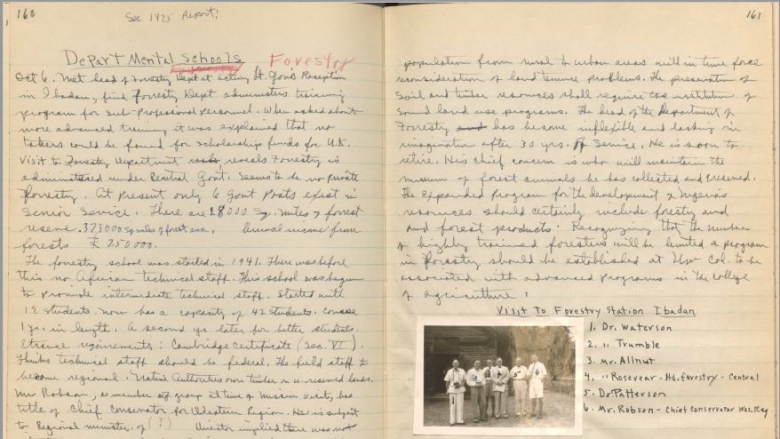 Pages 160 and 161 of Dr. Patterson's mission diary. The diary is included in Dr. Patterson's records at the Library of Congress (Box 6, Frederick D. Patterson papers, Manuscript Division). Click on the image to view the entire document.