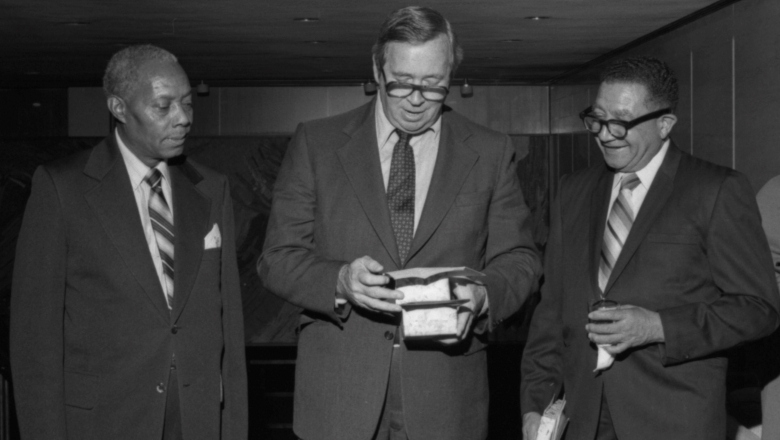 Bertha F. Wilson is an Archivist at the World Bank Group Archives in Washington, DC and has worked at the Bank Group for 23 years. As a member of the Archives’ Access to Information team, she works with external researchers and Bank staff to facilitate access to the Bank’s historical records. What follows is a profile of one of the original World Bank staff members, Mr. William (Bill) C. Kelly, Jr. Published as part of our celebration of Black History Month, Mr. Kelly's story highlights the contributions of DC's local community to the early establishment of our institution. 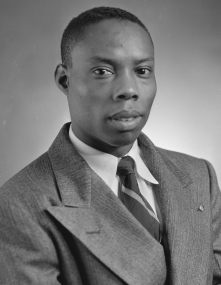 Mr. Kelly's early staff photograph, c. 1948 (1836140).
Early in my career at the World Bank, my Archives colleague, Mr. Steve Barrett, told me about Mr. William (Bill) C. Kelly, Jr., an African American from the local Washington DC community, who was hired by the Bank before the first day of operations in 1946. One of the most enjoyable aspects of working in the World Bank Group Archives over the last 23 years has been the pleasure I have in hearing and reading the stories of many individuals whose roles were essential, but not visible in the World Bank Group’s commonly known history. Mr. Kelly is one of these people. His story is of special significance to me because I am also a Black staff member from the local community.

On May 10, 1946, Mr. Kelly, a recently discharged World War II Army veteran, was sitting on a bench in the park known as “Community Park” at the intersection of Pennsylvania Avenue and 18th St. NW in the Foggy Bottom neighborhood of Washington, DC. Mr. Kelly, who had just stopped at the nearby Veterans Administration building to check on his benefits, was minding his own business when a man, introducing himself as Mr. McCorkle, asked for help. Mr. McCorkle was moving boxes from the U.S. Treasury Department to the tenth floor of 1818 H. St NW, the new home of the International Bank for Reconstruction and Development, or World Bank.

Mr. Kelly agreed and helped Mr. McCorkle move the boxes. After the work was done, Mr. McCorkle learned that Mr. Kelly was an unemployed war veteran, and he hired him on the spot. And that was how Mr. Kelly became one of the 26 staff members employed by the Bank when it opened for business on June 25, 1946. Mr. Kelly worked in the Office Services Department where his career growth mirrored the Bank’s growth as he went from mimeographing and delivering copies of Bank documents to managing the work and staff of the Print Shop using state of the art machinery. 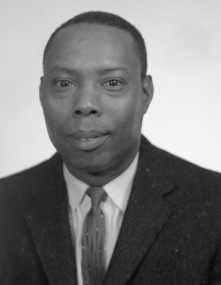 Mr. Kelly’s staff photograph, June 1961 (1836140).
The International Bank Notes internal staff newsletter chronicled the careers, milestones, business, and social activities of World Bank staff. In the early days, the Bank was very small, so staff members were like family to one another. Mr. Kelly’s name and photo appear in several issues of International Bank Notes. For example: in the June 1952 issue he is recognized as a “Bank Pioneer” along with other staff who joined the Bank during its first ten months of operation; the March 16, 1956 issue describes a World Bank-IMF staff basketball game where Mr. Kelly played guard on the winning team; and the January / February 1980 issue includes a story about Mr. Kelly’s retirement party.

Learning that Mr. Kelly played guard on the basketball team piqued my interest because I believe that guards are the quarterbacks of basketball and this reflects on him as a leader even though he wasn’t a senior manager or director. Full disclosure: I also played guard in high school.

In my quest to get a better idea regarding who Mr. Kelly was and what he was like, I reached out to his former colleague and basketball teammate, Mr. Colin Russell, as well as Mr. Kelly’s daughter, Yvette.

Mr. Russell recalled that the Kelly family lived in Washington DC’s Fort Totten neighborhood, a historic upper northeast community that grew rapidly after veterans returned from World War II. Today the area is known for its Metro stop just before the Maryland suburbs. Mr. Russell remembers Mr. Kelly as hard working, conscientious, well-liked and respected throughout the Bank. When asked about the basketball games mentioned in Bank Notes, he thought they were nice get-togethers. Mr. Russell, originally from Jamaica, noted that Mr. Kelly hosted picnics for the Print Shop staff at his Virginia property and that he collected aluminum plates destined for the trash after being used on the offset presses. 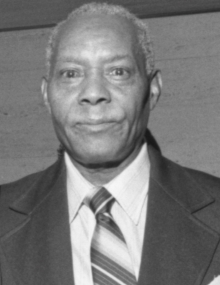 Mr. Kelly at his retirement party (1803889).
During my interview with Yvette Kelly, I learned that her dad was part of the staff contingent who supported the 1973 Annual Meetings held in Nairobi, Kenya. Yvette, then a student a Morgan State University, shared her memories of his trip. Among the artifacts that he brought home was a beautiful African outfit for her mother, Mrs. Edith Kelly. She borrowed it from her mom for a Miss Morgan State event where everyone complimented her and asked where she purchased it. I can only imagine her pride as she told them that her father brought it back from his World Bank mission to Kenya. Yvette graduated from Morgan, an HBCU (Historically Black Colleges and Universities), in 1976. As Yvette recounted the story of how her father was hired, she noted that her dad was a real conversationalist and that she could picture how he handled the situation when Mr. McCorkle approached him in the park. Her brother William Stephen Kelly, Steve, worked in the print shop during his university summer breaks.

The Kellys were newlyweds when Bill started his Bank career, and his wife Edith was a teacher. When asked about her mother’s career, Yvette noted that her mom was a schoolteacher for over 40 years for the DC Public Schools system; she taught first at Langley Jr. High School and then at the old H.D. Woodson High School when it opened in 1972 until her retirement in 1984. While I was in high school in the 1970s, I remember Woodson as an academic and sports powerhouse. In fact it boasted a 95% graduation rate from 1975-1979, and was named in honor of Howard Dilworth Woodson, an African American civil engineer and civic leader who “led successful campaigns for better services in neglected African American neighborhoods in far Northeast DC.”

Joseph H. Fitzpatrick presents each staff member with a watch. From left to right, William Kelly, Jr., Mr. Fitzpatrick, and John C. Bentley (1803889).
Mr. Kelly served the last five and a half years of his 34-year Bank career in the Bank’s Administrative Department as Foreman of the Press Room in the Print Shop. His retirement party was jointly held with his colleague John C. Bently on Monday, November 26, 1979.

As I look back at Mr. Kelly’s Bank career, I am reminded of my own dad who worked for the United States Postal Service and all the Black fathers in my Shaw neighborhood who donned fedoras as they headed off to work at one -- and sometimes two -- jobs to support their families.

I can imagine that Mr. Kelly was an excellent role model for his colleagues, family and neighborhood with his conscientious work ethic and military experience. No matter our grade or role, we each bring our own unique experiences, stories and care for our work that collectively strengthen the World Bank Group and contribute to its success.

In the Bank’s early years, it took the hands of many to lay the cornerstone of the institution including those who worked behind the scenes like Mr. Kelly. These hidden histories can be found in the WBG Archives, which I have the opportunity to encounter in my work almost every day.