Women who lead from the front

Women constitute half of India’s population, but have not benefitted proportionately from the country's economic prosperity.   The pandemic has seen more women affected because of the informal nature of their work.  But they have not given up.   From across the country have emerged stories of resilient women, coming out of their homes and helping communities with immense strength and courage.  They have turned the pandemic into a positive experience, tailoring their skills to fit the new world.  These stories offer hope and encouragement for others to follow.

"On this International Women's Day let us all make a pledge to support Government of India's call to bring back the girl child to school and build their agency and strength."
Junaid Ahmad
India Country Director, World Bank 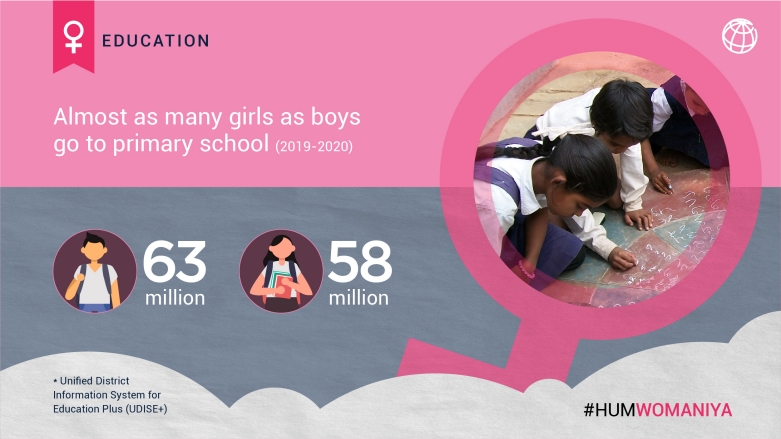 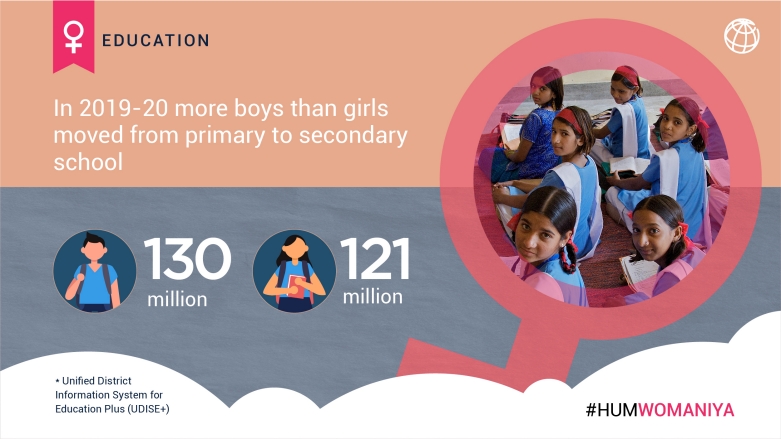 In 2019-2020, more boys than girls moved from primary to secondary school. 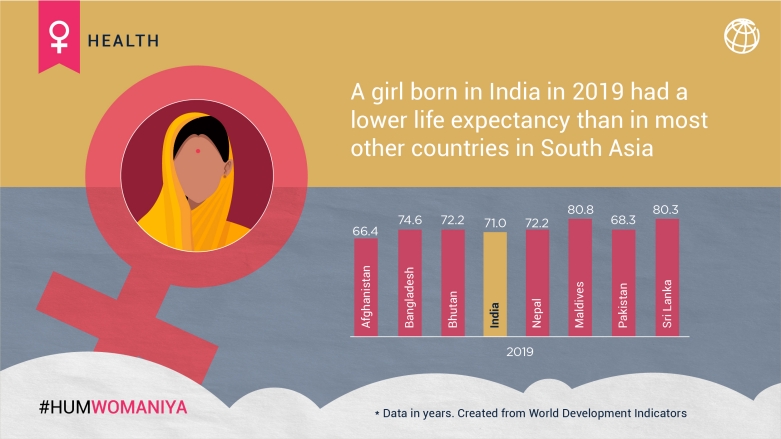 A girl born in India in 2019 had a lower life expectancy than in most other ... 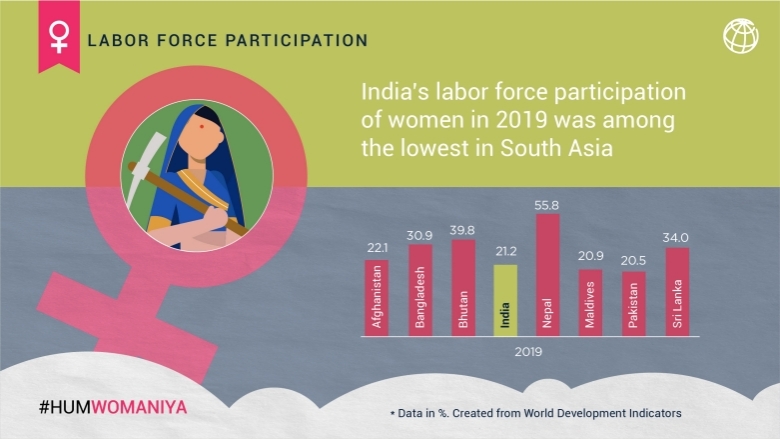 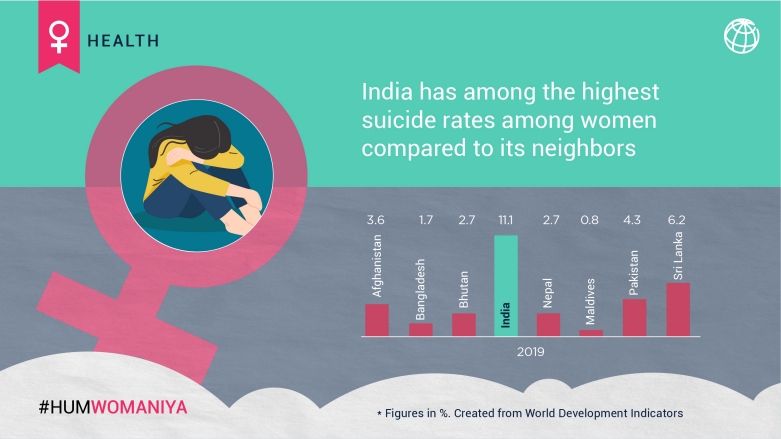 India has among the highest suicide rates among women compared to its ... 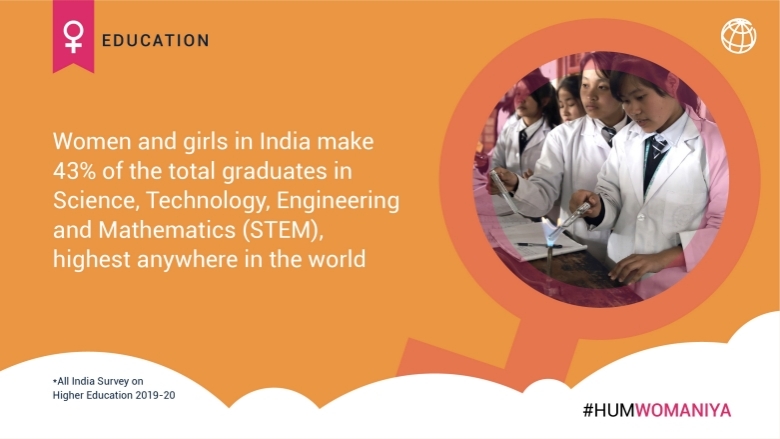 Women and girls in India make 43% of the total graduates in STEM, highest ... 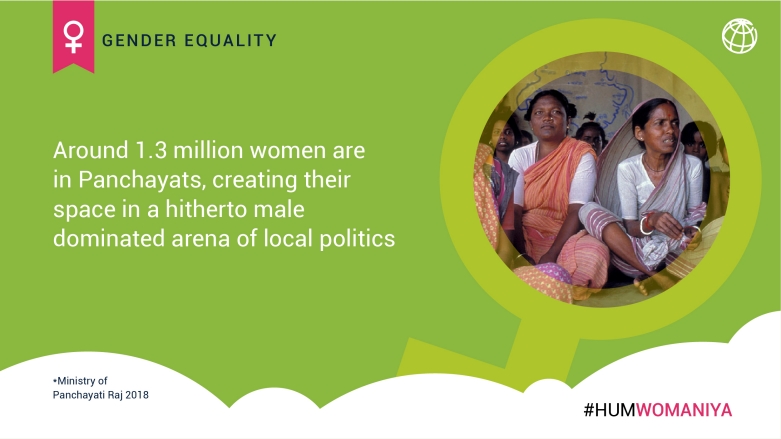 Around 1.3 million women are in Panchayats, creating their space in a ... 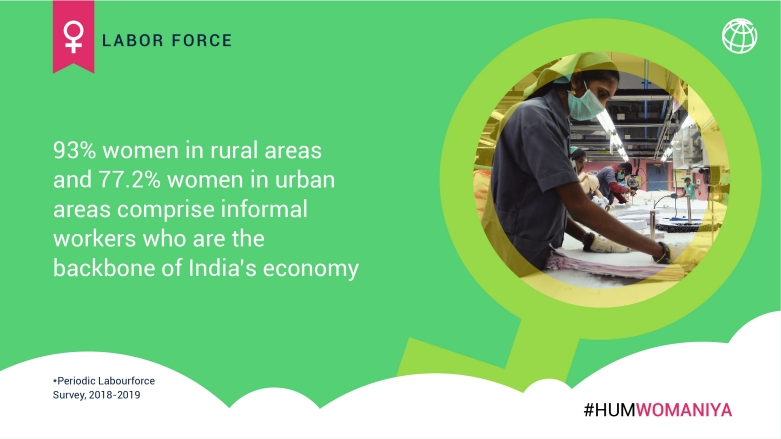 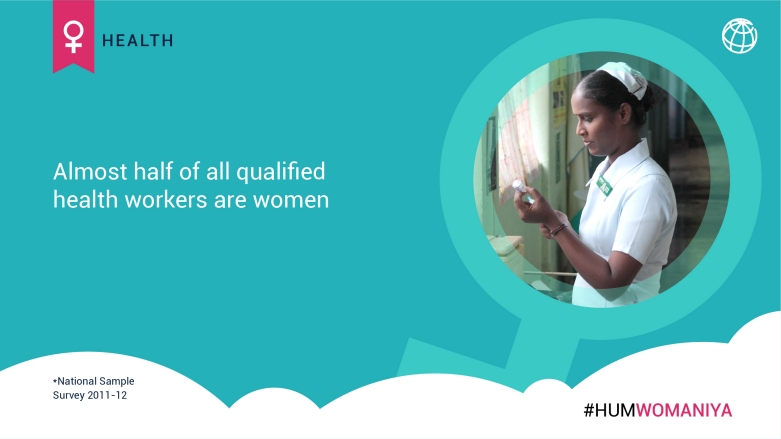 Almost half of all qualified health workers are women. 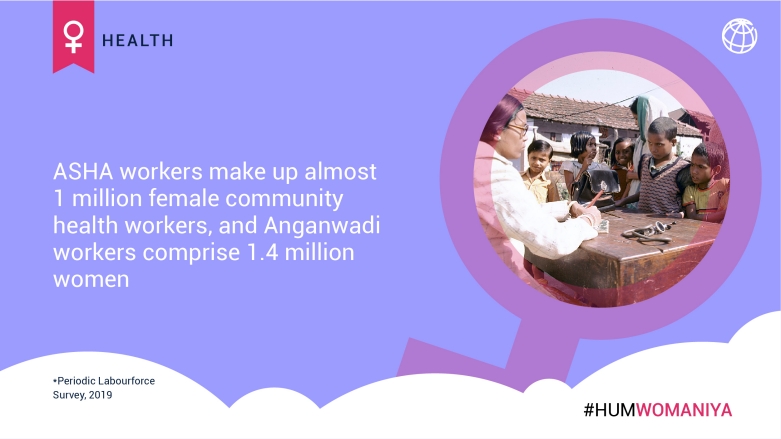 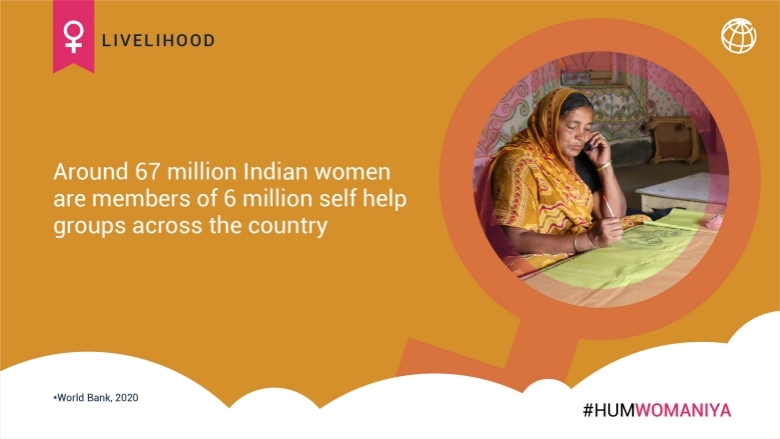 Around 67 million Indian women are members of 6 million self-help groups ... 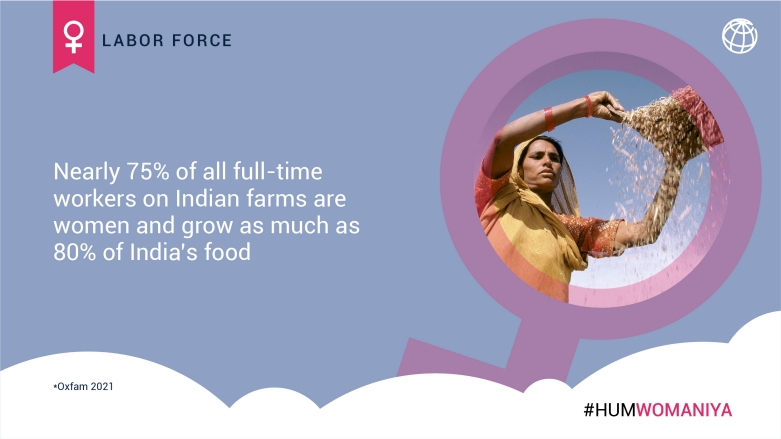 Nearly 75% of all full-time workers on Indian farms are women and grow as ... 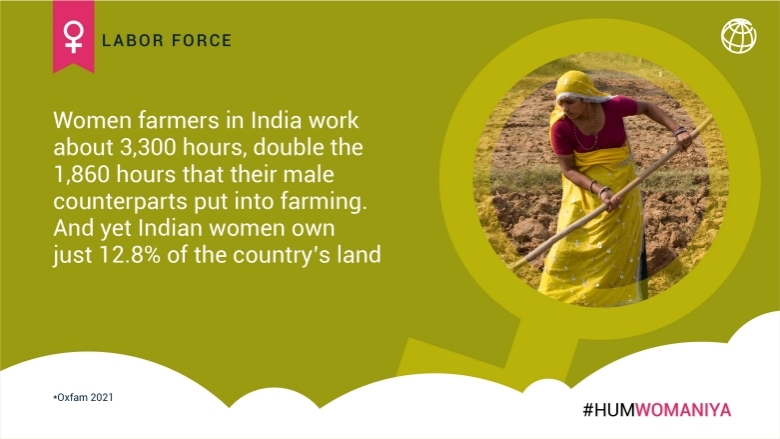 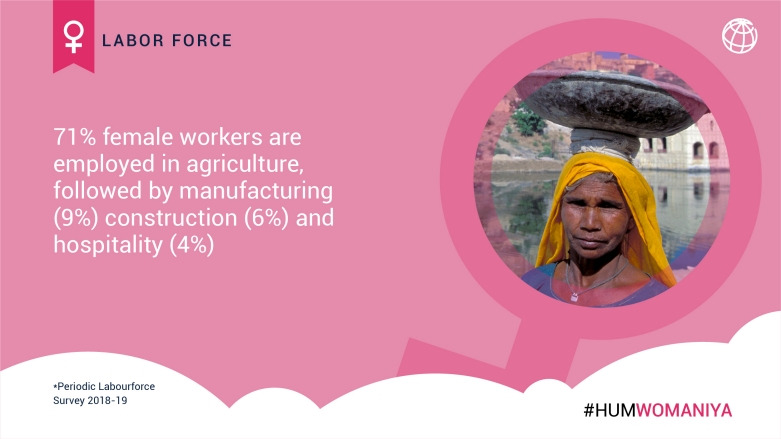 71% female workers are employed in agriculture, followed by manufacturing (9%)... 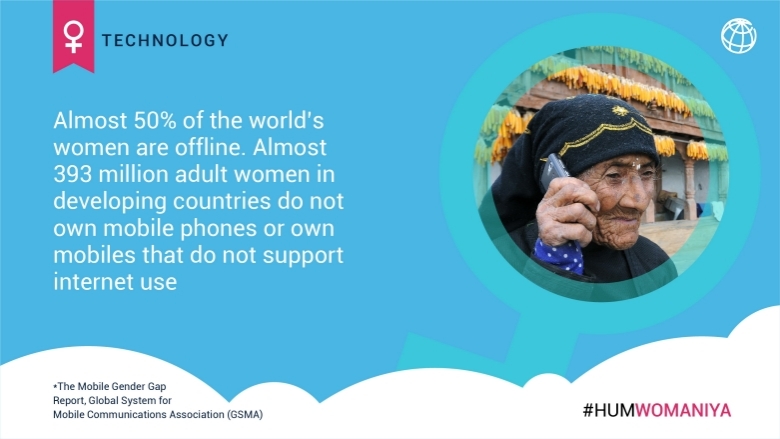 Almost 50% of the world’s women are offline. 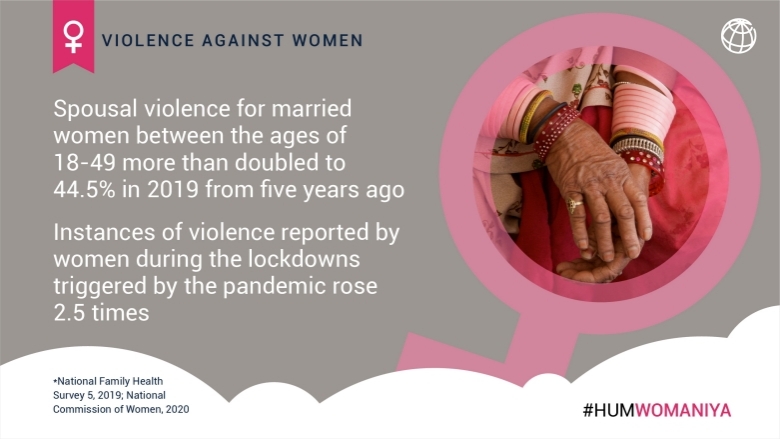 Spousal violence for married women between the ages of 18-49 more than ... 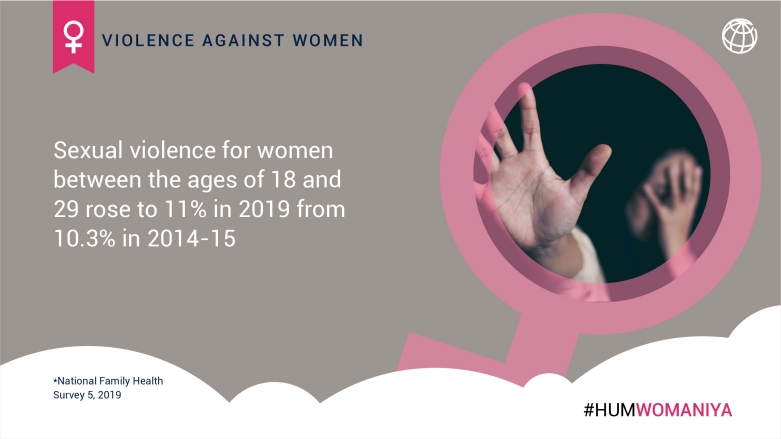 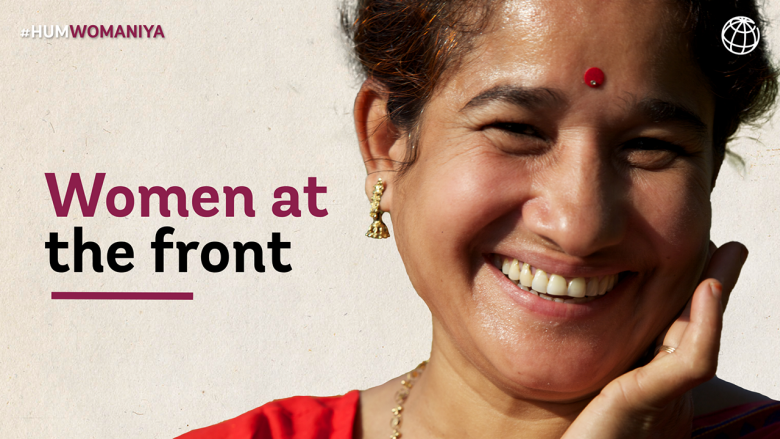 Women at the front

Anita Devi, an anganwadi worker from Giridh district in Jharkhand—a low-income state in India—is among an army of women mobilized in the battle against COVID-19. Usually fighting malnutrition from the frontlines, during the pandemic, these million-plus women joined forces with other members of the rural health workforce to go door to door, recording people’s travel history, noting flu symptoms and, where needed, even helping trace contacts.

They were a resilient workforce who adapted very quickly to difficult circumstances and came forward to answer the call of duty. "If the doctors and nurses can leave their families and work, day and night, why can’t we contribute in our own small way?” Anita Devi said when asked if she felt safe working during the pandemic.

Women’s Self-Help Groups (SHGs) have been another force that adapted their mission during this time. From being small savings and credit groups that sought to empower poor rural women in India, SHGs are now one of the largest institutional platforms of the poor, with over 70 million women as members of over 6.9 million SHGs in India.

Muskanben Vohara is part of a group of women weavers in Gujarat’s Anand district who have been trained in digital skills by the Self-Employed Women’s Association (SEWA). During the pandemic, these women, newly versed in their digital skills, were able to share photographs of their products online, create Whatsapp groups of customers, and enable digital payments for purchases. Many of these women have been able to make cashless payments through Paytm, the BHIM App, and Google Pay rather than meeting people, handling cash and risking infections.

“Not only were we able to continue our work uninterrupted [during the pandemic],” declared Muskanben proudly, “we sold off all our stocks of domestic furnishings.”

SEWA helps women who work in the informal sector, including seamstresses, artisans, vendors, and small and marginal farmers. 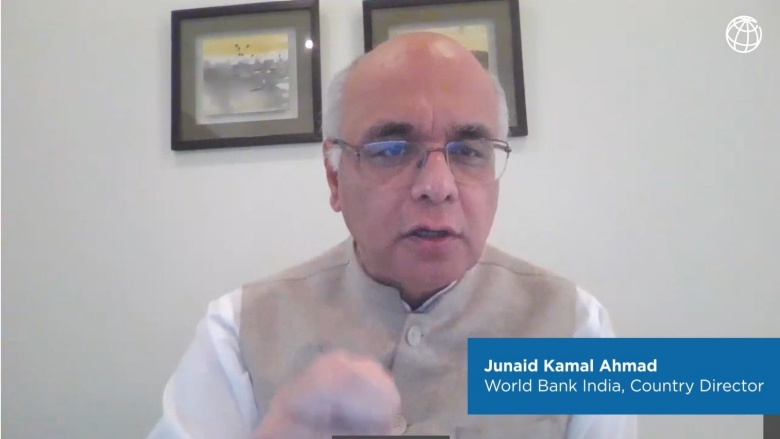 These who broke the barriers

Thirty-two-year-old Kausar Jahan is a mother of three, who lives with nine other family members in the eastern city of Hyderabad. Kausar was just 17 years old when she got married and had to drop out of school. A Government of India program called Nai Manzil - New Horizons – has given her a second chance to complete her education and learn a marketable skill.

During the pandemic Nai Manzil’s training enabled Kausar to get a job at a government hospital providing bed-side care to patients.

More than half of Nai Manzil’s beneficiaries are women, with Muslim women constituting the majority. So far, more than 50,700 minority women have benefited from the education and skilling provided by the program.

Another group of women who have been especially helpful during the pandemic are the Bank Sakhis, or female banker friend, first introduced by the National Rural Livelihoods Mission (NRLM) in 2016-17 and supported by the World Bank. These women have been a lifeline in these extraordinary times, helping people withdraw the money the government is crediting into their bank accounts to help them tide over the Covid crisis.

In a remote village in Bihar’s Aurangabad district, Bandhini Kumari has been providing basic banking services in her village for the past two years, but has never been as busy as during the past year. “I deal with 50-80 people every day. Even those who hardly ever operated their accounts are now coming forward to withdraw this money,” she says.

The World Bank has supported many such programs that have encouraged women to come out of their homes and take the lead in fields they have not traditionally been associated with.

Women engineers, for example, manage dams and build and maintain canals at the irrigation department in Kerala, a state that has the highest literacy rates in India, and where girls compete equally with boys in the tough entrance examination to qualify for the civil engineering courses conducted by government colleges.

S. Manju works with the Dam Safety department and often travels with senior women engineers to dam sites across the state for inspections. She feels extremely proud working with other women colleagues. “We feel a sense of accomplishment knowing that our work impacts people's lives in the state.”

Another field where women are not usually seen in India is masonry work; the women have traditionally played a supporting role, carrying bricks, and preparing the cement mixture, etc. In Jharkhand, however, an enterprising group of women masons have now broken this gender stereotype.

They first took up masonry work when the state launched a massive toilet-building drive under the Swachh Bharat Mission and most men had left to work in the cities. Jharkhand now has a 50,000-plus workforce of skilled women masons, called ‘rani mistris’, or the queen masons. These women have been key to helping the state achieve Open Defecation Free status in 2018.

The World Bank celebrates these courageous women who are breaking traditional roles carved out for them for generations.

As Sheetal Chaya, the daughter of rani mistri Usha says: “It is important that women take up work. That is the only way the economy will improve.” 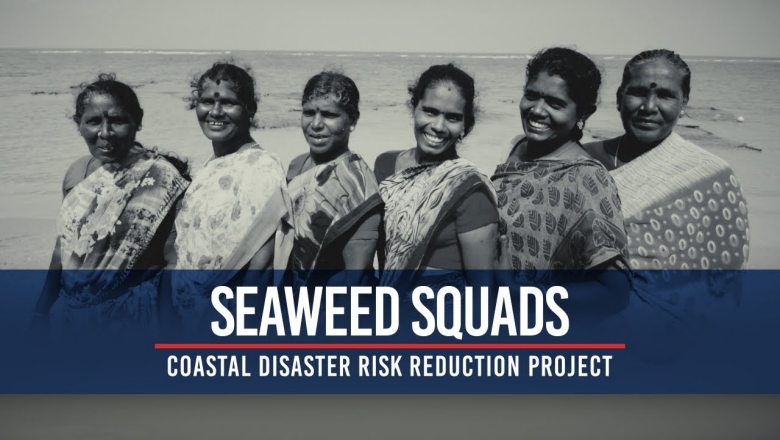 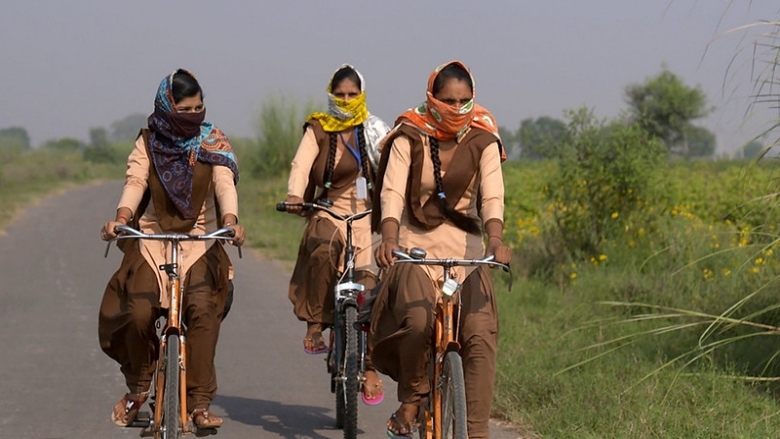 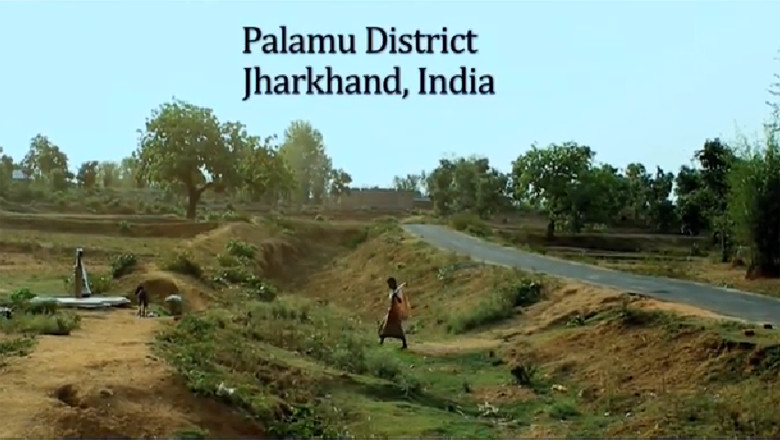 In Rural India, It Takes a Village — and Women’s Self-help Groups — to Improve Livelihoods 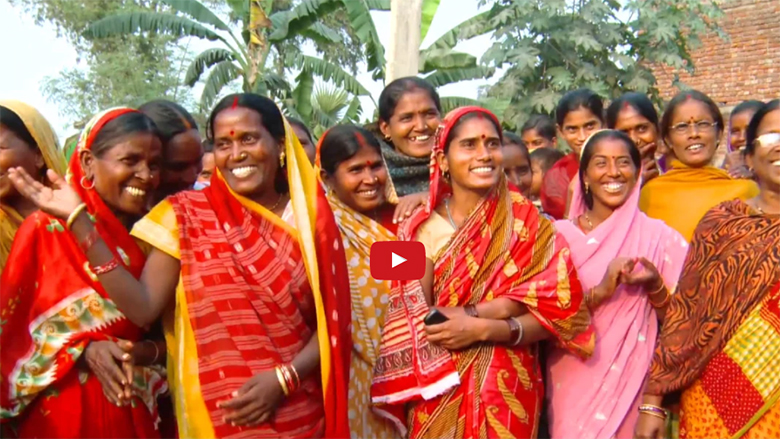 How 7 Million Women Are Leading Change in Rural Bihar, India 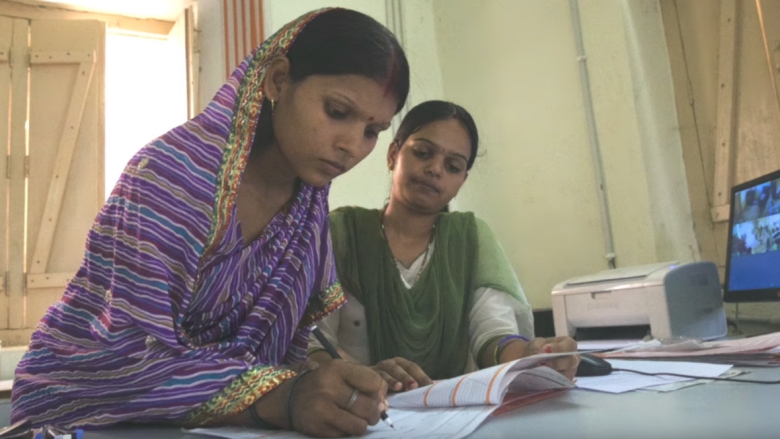 Muskanben and her group had just been trained in digital skills by the Self-Employed Women’s Association (SEWA), a membership-based organization that seeks to improve the lives and livelihoods of women who work in the informal sector in India.

Empowering minority women in India: Stories of resilience and hope during the ...

Today, while millions of lives and livelihoods have been severely impacted by the pandemic, women from minority communities across India are supporting themselves thanks to the Nai Manzil skills program.

Shaping women’s access to opportunities: Gender, transport, and employment in ...

Lack of access to transport and mobility shape women’s access to public services—especially to education and health.

Global statistics on road safety hide many disparities when it comes to the geographic distribution of victims, their socioeconomic profile, and, perhaps more surprisingly, their gender.

Directing social assistance payments to women – prioritizing them as the recipients – can offer them safer access to and increased control over funds.