Women in Development and the World Bank Group 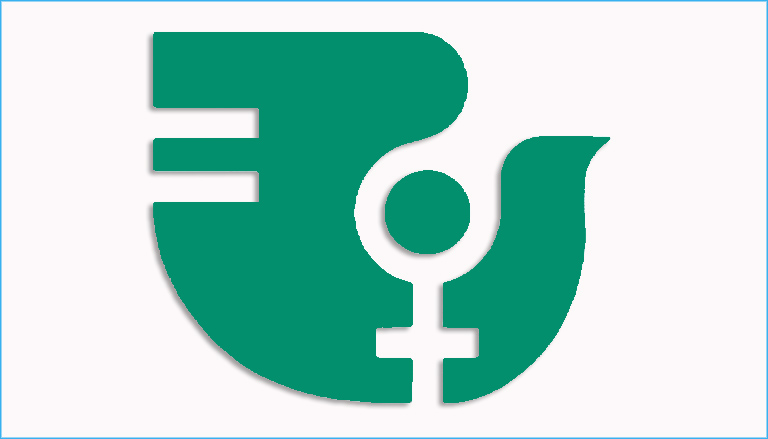 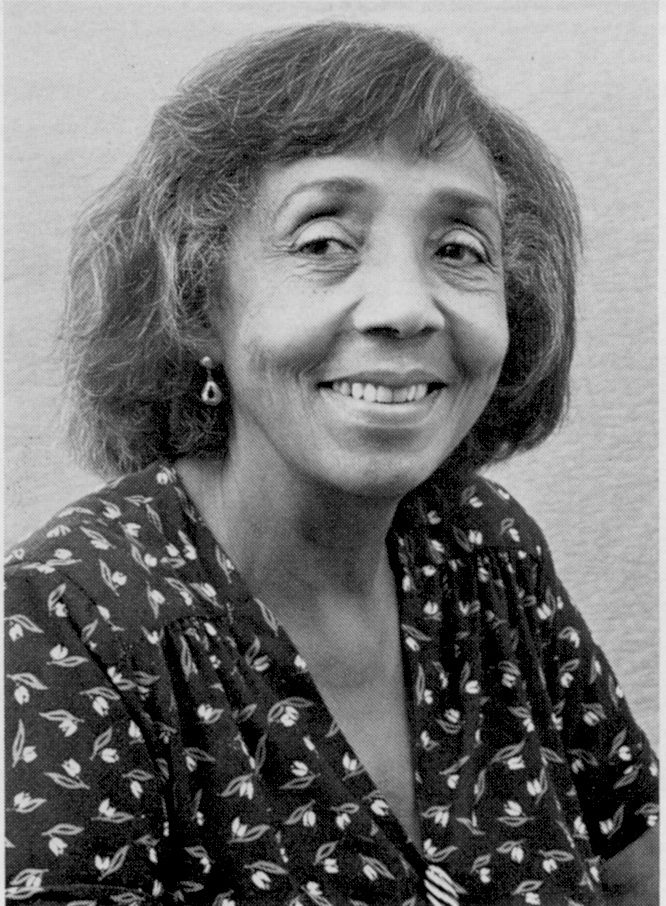 The topic of the marginalization of women in developing countries was first brought to the attention of the Bank in the mid-1970s. Coinciding with the United Nations’ “Decade for Women” (1976-1985), the Bank began investigating how the reality of women in poorer countries intersected with a variety of sectors, including education, water, maternal health, and food production and agriculture. Issues related to women’s legal rights and recognition were also explored. Research was increasingly geared towards the topic and conferences and workshops were organized and attended. Project evaluations also began to include a focus on the effect individual projects had on women.

A key development within the Bank was the creation of the Bank’s Adviser on Women in Development in 1977. The position, first held by Gloria Scott, “focused attention on the subject [of women in development], [and] promoted an understanding of the key issues and ways to address them in the Bank’s operational work and in countries which the Bank assists” (The Bank’s World, Volume 4: Number 9, September 1985, page 11). One important result of this attention on the subject and Scott’s work in particular was the 1979 publication of the report “Recognizing the ‘Invisible’ Woman in Development: The World Bank’s Experience”. 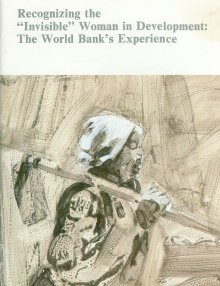 "Recognizing the 'Invisible' Woman in Development: The World Bank's Experience"
While an increasing amount of information was being generated with regard to the plight and potential of women in developing countries, the incorporation of women’s issues into the design of Bank projects was tentative throughout the 1980s. The subject continued to grow in importance, however, and in the spring of 1987 a Women in Development Division (PHRWD) was created in the Bank’s Population and Human Resources Department. The function of supporting project development, implementation, and evaluation was primary. Division Chief Barbara Herz said at the time that “We want to get beyond studies and training. We want to show what can actually be done to include women in development programs and how that contributes to economic performance, easing of poverty, and other development activities” (“The Bank’s World”, Volume 6:Number 11, November 1987, page 9). 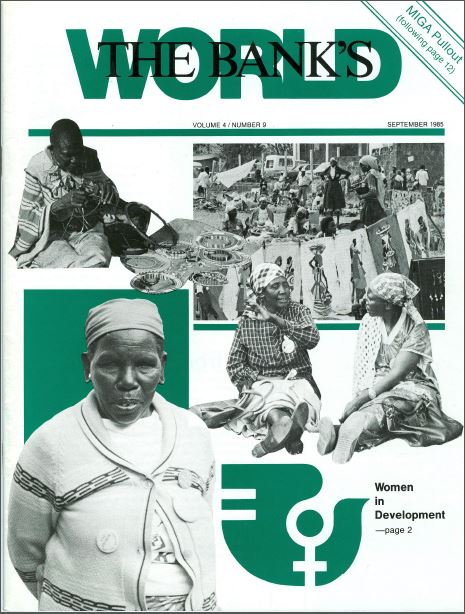 The Bank's World (Volume 4: Number 9, September 1985), special issue on women in development.
But by 1989, World Bank President Barber Conable was still not satisfied with the Bank’s commitment to women in developing countries. In a letter to then Senior Vice President, Operations, Moeen Qureshi, Conable requested a more systematic and operational approach to the issue. In the letter, he tasks individual Country Departments with the preparation of an assessment of women’s role in development and, importantly, an action program which should be put in place. Conable’s letter to Qureshi, along with an attached “Proposed Bank Approach and Plan of Action” template and a forwarding letter from Qureshi to Bank Regional Vice Presidents are reproduced below. Interestingly, these records form a piece of correspondence from Marianne Haug, Executive Assistant to the President, to President Conable’s wife, Mrs. Charlotte Conable who had a special interest in women in development.The records reproduced below can be found in the Subject Files series of the Records of Executive Assistant to the President, Marianne Haug second level sub-fonds (WB IBRD/IDA EXC-11-03-5445S) in Office of the President’s Records of President Barber B. Conable sub-fonds. Along with other Bank reports and memoranda related to the topic of women in development, the series contains the results of Conable’s request in the form of dozens of two-page summaries of the Country Departments’ Women in Development Country Assessments.

Records related to women in development and gender issues can be found in a variety of fonds in the World Bank Group Archives. If you are interested in this topic or others related to the World Bank Group’s history, visit our list of Finding Aids or visit our Access to Information page to submit a request or to communicate with an archivist. You can also search our Documents & Reports database to view research and project reports related to the topic of Women in Development. Oral histories of former Bank staff are also searchable in the Documents & Reports database or can be found at the Archives’ Oral History website. These interviews are an especially rich resource for investigation into all sorts of Bank-related topics; for example, see Katherine Marshall’s and Catherine Gwin’s oral histories for discussion of the evolution of the women in development sector. 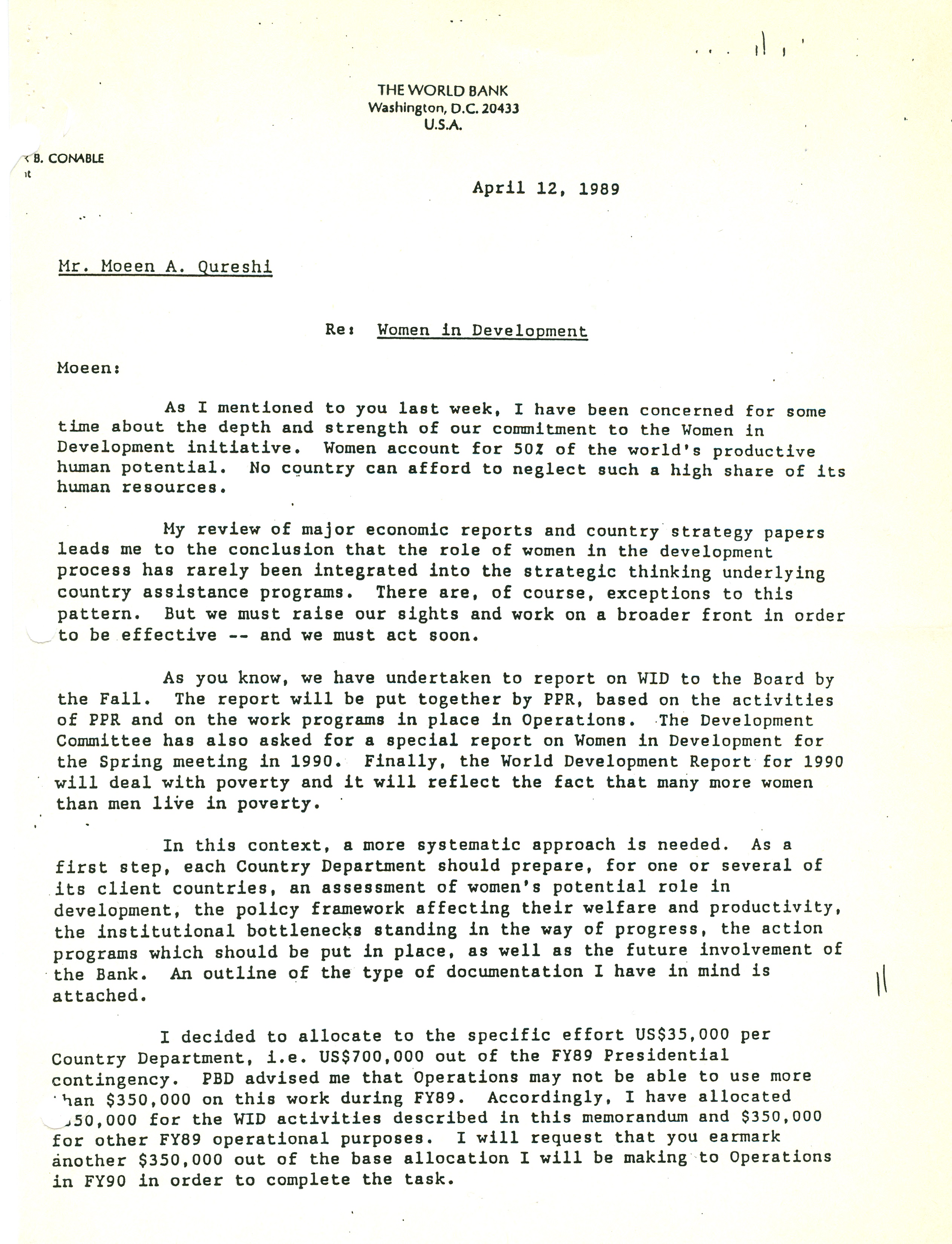 Portion of letter from Bank President Barber Conable to Senior Vice President, Operations, Moeen Qureshi, 12 April 1989 (Archives folder #1783538). Click on the image to view more of this letter as well as the correspondence from Marianne Haug to Mrs. Charlotte Conable, of which this is an attachment.