Preparing for the Robots: Which Skills for 21st Century Jobs?

The robots are coming and are taking our jobs. Or are they? The media and the blogosphere have been buzzing lately about the impact of artificial intelligence and robotics on our lives. In particular, the debate on the impact of automation on employment has amplified concerns about the loss of jobs in advanced economies.

And accelerating technological change points the spotlight on questions like: Do workers, blue and white collar alike, possess the right skills for a changing labor market? Are they prepared for the employment shocks that come with the so-called “fourth industrial revolution”? What skills strategy should countries adopt to equip their workforces for the 21st century?

A good start to answering these questions is to define the concept of “skills” and understand skills formation. A worker’s skill set has three components: cognitive skills like basic numeracy and literacy (including digital literacy), as well as advanced problem-solving and creative and critical thinking skills; social and behavioral skills like conscientiousness, grit, and openness to experience; and job- or occupation-specific technical skills like those required to work as an engineer or electrician.

Cognitive and social and emotional skill formation starts from very early childhood, with many  social and behavioral skills remain malleable throughout adult life. But the window for building cognitive skills closes with late adolescence. This does not mean we stop learning new things, but our brains are hardwired at certain point in development.

In contrast, technical skills are acquired later from adolescence throughout adulthood and in vocational schools, universities, and on the job. They depreciate, at an increasingly fast rate given technological change, and require constant upgrading.

Cognitive and social and behavioral skills are a priority

Skilled workers have even begun replacing robots in modern car production because they are more adaptable and flexible. On the contrary, adults with poor literacy and numeracy skills have difficulty learning and updating the technical skills needed to  compete in the modern job market.

All over the world, including in the United States and Europe jobs are shifting from routine tasks, which are prone to automation, towards interactive tasks, which require advanced cognitive and social and behavioral skills.

Yet many youth and adults in advanced and emerging economies have considerable basic cognitive skill deficits. Take the European Union (EU) for instance. In a majority of EU countries a fifth or more of 15 year-olds scored below functional literacy and numeracy in the mathematics and reading tests of the 2012 Program for International Student Assessment (PISA).

Poor performers often come from socially disadvantaged backgrounds, suggesting that education does not always present an opportunity for social mobility. This is bad economic and social news for countries with declining and aging populations. 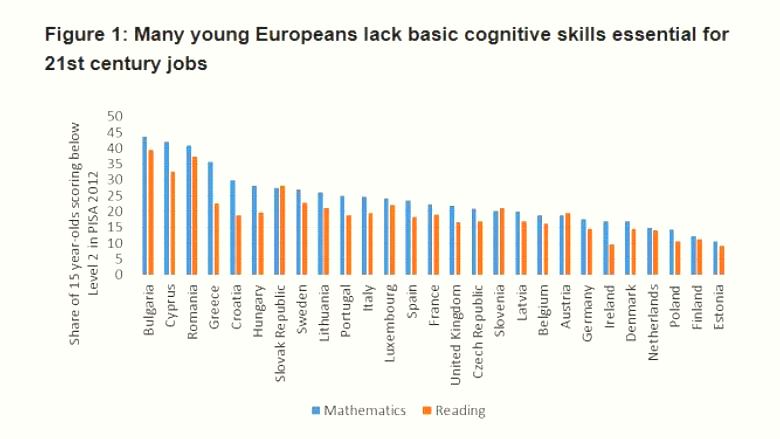 What does such a skills strategy mean for 21st century education policy?

First, governments should prioritize universal basic cognitive skills like reading and mathematics, emphasizing quality education for children from disadvantaged background who are disproportionately represented among poor performers in PISA. This starts with expanding quality early childhood development and education interventions to help stimulate brain development during the all-important early years. Strengthening social and behavioral skills in school, for example through “growth mindset” interventions, can be an effective tool to make up for disadvantage by boosting students’ confidence and goal orientation.

Second, governments can take advantage of the opportunity provided by longer years of schooling: With students “captive” in kindergarten and school during the critical period of their skills formation, innovation in classroom and teaching practices, such as in Colombia’s Escuela Nueva model now adapted in PISA 2012’s success story Vietnam, can help foster advanced skills like problem-solving, critical thinking and team work.

Third, the answer to the fast depreciation of technical skills is, beyond ensuring faster brains, a faster adaptation of technical education and training content through greater partnership between firms and universities and vocational schools. Technology and big data can help capture and better understand the evolution of occupations and technical skills needs in real time: Just let the robots work for us.

This blog post was originally published on Brookings (March 2016)