Fifty years ago, the World Bank Group, led by President Robert S. McNamara, embarked on a new path that would become the organization’s first foray into the health sector of developing countries. The Onchocerciasis Control Program (OCP), instituted by the Bank Group and its partners in 1972, was ultimately one of the greatest coordination successes in the history of the organization, leveraging multiple organizations across many sectors.  A common parasitical disease spread by a species of blackfly, onchocerciasis, also known as river blindness, can cause vision changes or total blindness, debilitating skin conditions and reduced life expectancy. By the early 1960s, the endemic disease was forcing villagers in West Africa to abandon the rich farming lands along the fly-infested river valleys to move to more arid, less fertile areas that were also experiencing devastating droughts.

The World Bank Group had joined other international agencies in attempts to address river blindness since the 1960s but the Bank Group’s Board of Directors was reluctant to venture into financing the health sector. However, after Robert S. McNamara arrived in 1968, Roger Chaufournier, Director of the Bank’s West Africa Department, drew his attention to the serious effects the disease had on the economic development of the region. McNamara traveled to Upper Volta (now Burkina Faso) with Chaufournier in March 1972 where he saw the devastation wrought by the disease first-hand. He also visited a United Nations Development Programme (UNDP)-financed research center in Bobo-Dioulasso where he met the scientists who had successfully piloted a regional control program to kill the blackfly's larvae with chemical larvicide in the Volta Rouge river.

McNamara recounted the complex undertaking that the scientists described to him. "First, because the parasitic worm lived so long in its human hosts, the control program would have to be maintained for 20 years. And second, because the fly could travel such long distances the program had to be launched and maintained over a vast area involving many countries, some of which were hardly on speaking terms."

In his oral history transcript, Chaufournier recalled that after they finished the tour that day, McNamara asked him, "What have you been waiting for to get into this program?"

In April 1972, a month after his return from Africa, McNamara met with the heads of UNDP,  World Health Organization (WHO), and Food and Agriculture Organization (FAO) to propose a multi-donor international effort to control river blindness. Despite some resistance to the Bank Group expanding into an area not traditionally its own, the organizations agreed to proceed with planning and implementing an Onchocerciasis Control Program (OCP) in Western Africa. An operational agreement was signed by the seven participating governments in late 1973 authorizing the OCP to initiate control operations in the Volta River Basin.

The Bank Group led the effort to mobilize funds for the OCP which involved building a coalition of donor countries, multilateral organizations, and, in later years, private sector donors. The Bank Group also provided initial cost forecasts, developed a long-term strategy for the program, and was responsible for donor coordination, program fund administration, and development operations as areas were made habitable again.

In November 1974, the OCP was launched with the first recurrent aerial sprayings of larvicide in Benin, Burkina Faso, Cote d'Ivoire, Ghana, Togo, Mali, and Niger. The program expanded to the remaining four endemic countries in West Africa in 1989 (Guinea, Guinea-Bissau, Senegal, Sierra Leone). In the same year, a strategy was developed to combine larvicide spraying with mass distribution of ivermectin to treat people infected with the parasite.

OCP completed its operations in 2002. According to WHO, the OCP relieved 40 million people from infection, prevented blindness in 600 000 people, and ensured that 18 million children were born free from the threat of the disease. In addition, 25 million hectares of abandoned arable land were reclaimed for settlement and agricultural production, capable of feeding 17 million people annually.

A separate but similar program, the African Program for Onchocerciasis Control (APOC), was launched in 1995 by the Bank Group and its partners to target the disease in the remaining endemic countries of Sub-Saharan Africa. APOC closed at the end of 2015, treating 119 million people with ivermectin in thirty-one African countries.

Archival records related to river blindness control are found in several fonds, which are the body of records naturally created by a department or office reflecting their business activities. Below you will find inventories containing lists of related records primarily organized by office of origin. Most records originated within the Africa Regional Vice Presidency fonds, including the Onchocerciasis Program Administration unit. Other records were created by the Office of the President, External Relations, the Population, Health and Nutrition sector department, and others that are grouped as Assorted Departments in the below inventory. Records include: correspondence with participating countries and donors; briefings and partnership files; financial and audit records; progress and evaluation reports; annual proceedings of the Joint Program Committee, Joint Action Forum, Committee of Sponsoring Agencies, National Onchocerciasis Committees and other bodies; press releases and speeches; publications; research papers and case studies; photographs; and films and videos produced by the Bank Group.

Many records in these fonds have been declassified according to the World Bank’s Access to Information Policy, and a portion of them are digitized. Hyperlinks to digitized records are included where available. 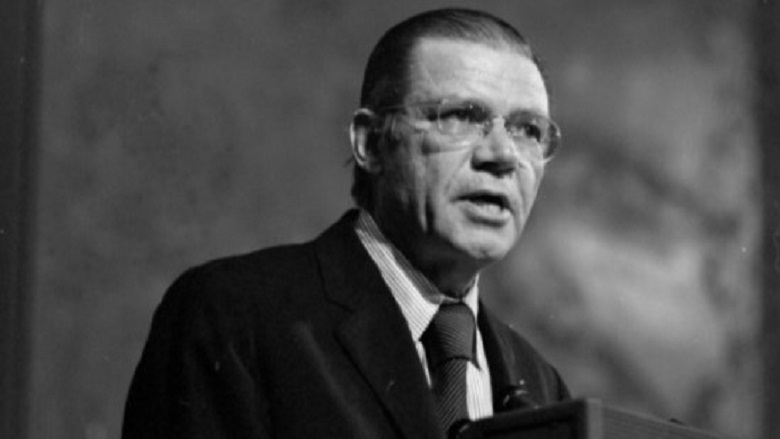 President McNamara gave this speech on the occasion of the signing of the onchocerciasis fund agreement on May 7, 1975.

Video: A Plague upon the Land

Video: A Plague upon the Land