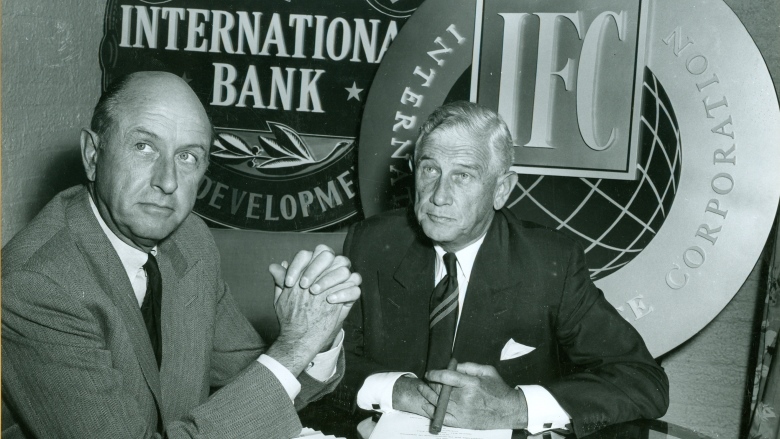 This year marks the 60th anniversary of the International Finance Corporation (IFC), the World Bank’s private sector arm. Created in 1956 in response to perceived capital limitations and structural challenges in the developing world, IFC is a catalyst for investment in private enterprise through its own investment and through the stimulation of private capital from other sources. While its objectives have not significantly changed over time, the variety of tools and strategies IFC employs has evolved. 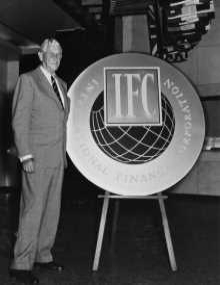 IFC's first Vice President, Robert L. Garner.
The IFC’s first loan was made in 1957 for $2 million to a Brazilian affiliate of German engineering company Siemens to finance the manufacture of electrical equipment. Loans to various private enterprises for manufacturing plants, aircraft repair facilities, mining operations, and steel plants soon followed. However, in years immediately following, IFC used new ways to invest its capital and promote investment by others. In 1959, IFC initiated its first syndication loan when it mobilized $2 million from a group of banks for investment in a Brazilian pulp and paper company. Following a 1961 charter revision that granted it the authority to make equity investments, IFC assumed the role of equity investor in a variety of companies. Soon after, it focused on development finance corporations (DFCs): enabling investment in local businesses that had limited access to capital. By the 1970s, IFC was strengthening local capital markets through investment and knowledge-sharing while supporting companies, governments, and financial institutions through the provision of global advisory services. The 1980s brought focus on stock markets and private equity funds in emerging country markets and in the 1990s IFC provided important support for privatization efforts in Eastern Europe. In 2006, IFC adopted its new Sustainability Framework, a group of policies and standards that promote social protection, environmental sustainability, and transparency. 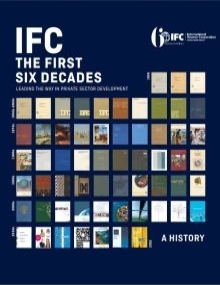 IFC historical publication celebrating its 60th anniversary.
These are only a few of the highlights culled from IFC’s fascinating history. To celebrate its anniversary, IFC has published a comprehensive history, IFC: The First Six Decades, which documents its accomplishments and provides context for, and explanation of, its many activities. It also includes informative resources, such as an institutional timeline, helpful sidebars, and striking archival images – some of which were selected from the World Bank Group Archives! Ultimately, the publication provides the institution with an opportunity to communicate to others how it views itself, its mission, its legacy, and its future. We urge you to check it out! In addition, please visit the IFC History page on the IFC website and access IFC Annual Reports from 1957 to the present on the World Bank Group's Documents & Reports website.