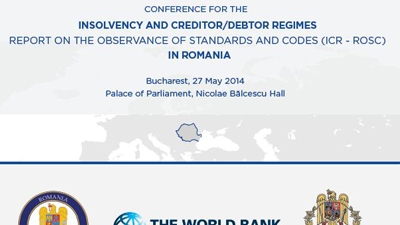 The dissemination event “Insolvency and Creditor/Debtor Regimes Report on the Observance of Standards and Codes (ICR-ROSC) in Romania“ was held on 27 May at the Romanian House of the Parliament. The event was designed by the ICR team in collaboration with Finance and Private Sector team within the World Bank Office in Bucharest, the Ministry of Justice, Juridical Commission of the Chamber of Deputies and the Insolvency Code Consortium.

The Romania ICR ROSC was finalized recently and was delivered to the Romanian authorities in April 2014. Many of the recommendations in the ROSC were taken on board in a new insolvency law which was recently enacted. In the process, technical assistance and support was provided to the Romanian authorities throughout the various stages of the formulation of the new law and the debates that took place.

The dissemination event brought together various relevant groups of Romanian stakeholders, including judges, insolvency practitioners, lawyers, accountants, bankers, and officials from relevant ministries (a total of about 100 participants). The event commenced with welcoming remarks by the Minister of Justice, the Head of Legal Commission of the Chamber of Deputies and the President of the Supreme Counsel of Magistracy, who noted the commitment of the Romanian authorities to the development of a thriving business environment through the modernization of the legal infrastructure supporting businesses, and thanked the World Bank for the continuing support and assistance through expert support and knowledge sharing. Elisabetta Capannelli, World Bank Country Manager for Romania, emphasized the critical role and impact that assessment reports have had in Romania and highlighted some of the key recommendations of the ICR ROSC. Dr. Irit Mevorach then presented the ICR ROSC findings and recommendations, and highlighted the key areas were the ROSC conclusions were already taken on board, and areas which require further monitoring going forward.

Subsequently, a roundtable panel comprising representatives of key stakeholder groups - lenders, the judiciary and insolvency professionals - discussed aspects of the report from different perspectives. The Executive President of the Banking Association noted that the ICR ROSC has managed to capture the actual practice in Romania. He then highlighted the challenges faced by lenders dealing with distressed debt, but also that banks are learning to appreciate that insolvency is not necessarily the end of the possibility for recovery of the debt. A syndic judge noted the challenges faced by the insolvency judges in the absence of sufficient capacity and resources. A representative of the Insolvency Practitioners Association noted the need to improve training in economics and business administration for administrators, especially in view of the greater focus on restructuring. The panel was then joined by the ICR team for a questions and answers session.

The second part of the event focused on the new insolvency law and on key challenges in its implementation. The process leading to the reform and its key aims were presented and discussed by a panel with representatives of the Ministry of Justice and the Insolvency Code Consortium. The panelists stressed in their speeches the invaluable support they had received from the World Bank throughout the process leading to the reform, especially in view of the intense debates that took place and as it was often required to reach understandings between conflicting interests. Leif Clark then led a discussion on key challenges in restructurings and workouts. It was stressed that the new law, which includes in one code the pre insolvency and insolvency procedures, is now more modern and largely compatible with international standards, however the lack of rescue and negotiation culture raises the question whether restructuring procedures will be used in practice, whether new finance will be provided, and whether key participants, including tax authorities, will take part in the process. The final presentation, by Irit Mevorach, Senior Counsel at the World Bank Insolvency and Creditor/Debtor Regimes Initiative, looked at recent and on-going international developments in the areas of directors’ obligations, enterprise groups and international insolvency. The aim was to raise awareness to the evolution of international standards, highlight the relevance of these new developments to the Romanian insolvency framework and to encourage the authorities to both monitor and actively participate in international standard setting.

The judicial training organized on May 28 took stock of the ROSC findings and recommendations as well as the further developments in the new insolvency law.

The event was designed by the ICR team in collaboration with the World Bank Finance and Private Sector, the Ministry of Justice, the Insolvency Code Consortium at the Price Waterhouse Coopers (PwC) Bucharest office. The workshop aimed at building capacity in the judiciary to enhance the ability to deal with the complexity of insolvency cases and to manage with greater skill and confidence restructuring proceedings.

The sessions generated lively and highly relevant debates and discussions among the judges.