Partnering with Mozambique to Promote Resilience and Inclusive Growth 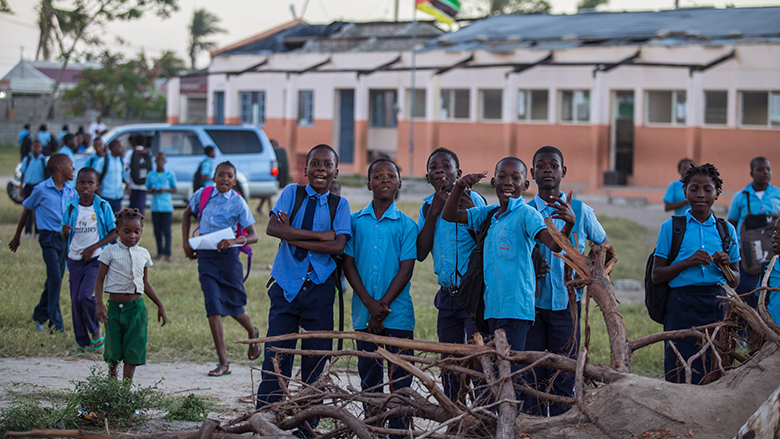 Mozambique made headlines this year, as two major cyclones had a catastrophic impact on millions of people.  The second-largest port city, Beira, took a direct hit from Cyclone Idai. Soon after, Cyclone Kenneth made landfall in the country, causing further damage.

For the world’s poorest countries, this kind of setback has all too often reversed years of development progress.  But devastating as these storms were, they also showed that Mozambique has made important progress in dealing with climate risks—an effort in which the World Bank is a key partner.

As part of his first official overseas trip in May 2019, World Bank Group President David Malpass visited Beira, where he announced $350 million in emergency financing for Mozambique from the IDA Crisis Response Window. This is helping to reestablish the water supply, rebuild damaged infrastructure and crops, and support disease prevention, food security, social protection, and early warning systems in communities.  The funds complement other efforts to boost long-term resilience, such as the Disaster Risk Management and Resilience Program for Results, which seeks to improve financial protection against natural disasters, strengthen preparedness and response, and build climate-resilient schools.

We have also supported the government’s response, a massive effort through its National Disaster Management Institute that has brought together more than 14 countries, 1,000 aid workers, and 188 organizations. Within a month of Idai, over a million people received food assistance, some 900,000 had clean water, and nearly 750,000 were vaccinated against cholera. The port was also back in operation as the city cleaned up. This was partly thanks to a World Bank co-investment with Germany’s KfW for a stormwater drainage system that reduced the severity of flooding in the city. The project also provides solar-powered street lighting, which withstood the storm and for a time was the only source of light in the city.

A strong recovery can help the government get back to supporting long-term economic growth, where progress has been encouraging in recent years.  Central to this, and to ensuring that growth includes everyone, is human capital.  Mozambique has struggled with systemic inefficiencies and a lack of coordination that undermine the quality of education and health care. In 2014, the government launched the Public Financial Management Program for Results to eliminate bottlenecks and enhance cooperation across ministries.

This approach is bringing improvements, for example by targeting factors that had lowered learning outcomes: weak school governance, little community participation, high absenteeism, and delays in school funding. By 2017, all 1,300 participating primary schools received grants by the start of the school year, letting them purchase learning materials and support the most vulnerable students. “This is a major improvement, as it allows us to plan better at the beginning of the year,” explained Matilde Xilume, director of the 3 de Fevereiro primary school in southern Mozambique.

Similarly, the health system is improving service delivery and treatment by ensuring that public facilities keep medicines stocked and avoid using any expired and damaged supply. As João Grachane, a senior officer at Mozambique’s health ministry, put it, “Medicines only have value when they reach the right patient at the right time.” In 2013, prior to the program’s launch, the availability of medicine for maternal health at public facilities stood at 79 percent; by 2018, this increased to 83 percent. Meanwhile, the percentage of treatment sites running out of antiretroviral drugs had dropped from 27 to 5.

Building on this progress, Mozambique launched a further Program for Results in 2017, with a focus on primary health care in more remote areas of the country. This program has achieved encouraging results in its first year, including more births occurring in health facilities, improved family planning coverage, more staff allocated to primary health centers and rural areas, and community health workers reaching more families in remote locations. The program also provided funding for the reconstruction of health facilities in districts most affected by the recent cyclones in central and northern regions of the country.

Despite considerable gains, Mozambique remains very poor and faces big development challenges. Our 2018 Human Capital Index found it to be below average for its income group and Africa as a whole, based on indicators such as expected years of schooling, harmonized test scores, survival rates, and childhood stunting. While growth has been steady in recent years, the benefits have not been shared broadly enough. High levels of public debt require continued progress in restructuring and rebuilding trust with investors. And despite the strong start in cyclone recovery, natural disasters are expected to become a bigger and more frequent risk to livelihoods and infrastructure.

The Bank remains committed to helping the country address these challenges. By promoting inclusive growth and long-term sustainability and resilience, we can help the government alleviate poverty and ensure a better quality of life for everyone in Mozambique.

The World Bank Annual Report 2022 is available to download in multiple languages via the links below (published September 30, 2022).