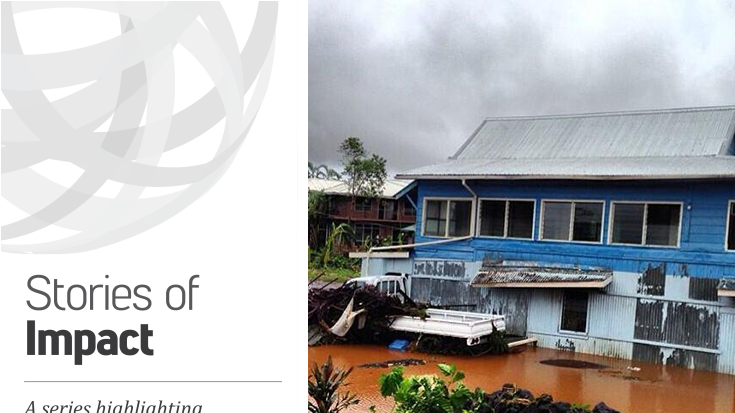 In the Pacific island nation of Samoa, tropical storms often cause devastating damage to homes, infrastructure and communities. Following the powerful Tropical Cyclone Evan that swept across the island in July 2012, the World Bank and the Global Facility for Disaster Reduction and Recovery (GFDRR), with funding from the Africa Caribbean Pacific–European Union Natural Disaster Risk Reduction Program (ACP-EU NDRR), worked with the government of Samoa to assess damages, launch a comprehensive disaster recovery and reconstruction plan to make the transport and agriculture sectors more resilient, and strengthen the country’s financial capacity to manage future shocks from natural disasters.

Samoa is exposed to a number of natural hazards, including tropical storms, floods, earthquakes, volcanic eruptions, and droughts. In 2012, Tropical Cyclone Evan destroyed over 600 homes, killing 14 and displacing more than 7,500 people. The total economic damages and production losses were estimated to exceed $210 million, equivalent to about 30% of the country’s gross domestic product (GDP) in 2011. The storm damaged the country’s international airport, key roads, bridges and ports. Decimating crops and farms, Cyclone Evan disrupted the livelihoods of thousands of farmers and fishers in Samoa.

The World Bank and GFDRR, with funding from the ACP-EU NDRR Program, supported the post-disaster recovery in Samoa by conducting an assessment of the socio-economic damage from the storm, with recommendations for recovery and reconstruction planning and fund mobilization. The assessment helped mobilize three World Bank grants that are working to:

Strong coordination mechanisms support quick decision-making and trust among stakeholders. The government response team was chaired by the Ministry of Finance and comprised of representatives from the World Bank, UN and key partners. The setup ensured efficient and inclusive decision-making and oversight throughout the recovery planning process, and strong uptake of the findings by the government agencies and development partners.

Inclusion of 'building back better' principles and risk reduction into recovery and reconstruction is important in efforts to build disaster and climate resilience. The damage assessment addressed how to quickly respond to the immediate needs of the population and also strengtehn the island against future storms, for example by enforcing improved building regulations.

The Agriculture and Fisheries, Enhanced Road Access and Samoa Development Policy projects are under implementation. The long-term strategy is to increase the resilience of Samoa’s vulnerable population and sectors through continued engagement with the government, in line with the government’s National Disaster Risk Management Plan. This will also be done through Samoa’s participation in a planned regional Pacific Resilience Program (PREP) to strengthen disaster resilience, early warning and preparedness, and improve post-disaster response capacity.

" We welcome support to our long-term reconstruction program as we continue our efforts to rebuild more resilient infrastructure and to promote economic recovery. " 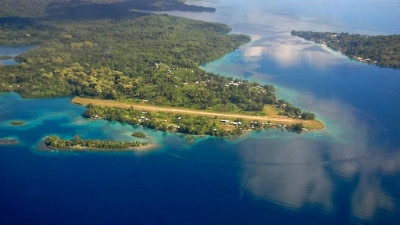 Living in the Small Islands of the Pacific