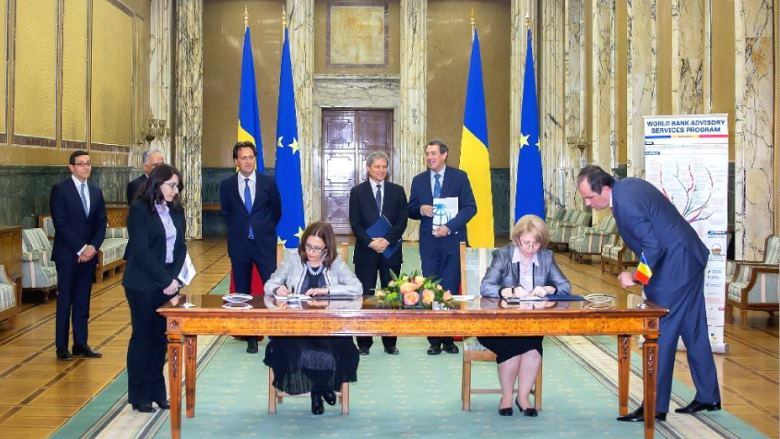 Signing of the Memorandum of Understanding between the World Bank and the Romanian Government at the Victoria Palace, Bucharest

BUCHAREST, January 11, 2016 – Today, the Government of Romania and the World Bank signed a Memorandum of Understanding (MoU) for the continued provision of advisory services through 2023. The MOU will support the Government in pursuing its structural reform agenda and increasing the effectiveness of public administration as Romania continues to converge towards EU average. Advisory services provided under the aegis of the MOU will benefit public institutions and be financed through the European Structural and Investment Funds (ESIF) under the 2014-20 programming period.

The Bank’s partnership with the Government of Romania spans more than 40 years, during most of which Romania was in a traditional borrowing role, but in the last five years advisory services and support to overcome the crisis have provided the centerpiece of the program. This has helped develop a new and more effective model for the World Bank to operate in its more advanced member countries in Europe and other regions globally.

“The World Bank brings to the table knowledge and international expertise that the Romanian national and local authorities have effectively leveraged in the last five years through its advisory services partnership with the Bank. This successful  partnership has broadened both in depth and coverage recently, resulting in impressive results in key areas and establishing Romania as the country with the largest such program in the World Bank,” said Cyril Muller, the World Bank Vice-President for Europe and Central Asia. “The experience and knowledge generated has established the Romanian model as one many countries now wish to replicate.”

After the successful experience of the last five years, the new MoU includes the extension of the advisory services to the entire ESIF 2014-20, including, for the first time in Europe, access to the European Agricultural Fund for Rural Development and the European Maritime and Fishery Fund.

“This MOU marks a breakthrough as it allows for our partnership to develop over the next 10 years and access a larger pool of EU funds. Since 2010, we have delivered over 40 advisory services in Romania and worked with almost 20 public institutions,” said Elisabetta Capannelli, the World Bank Country Manager for Romania and Hungary. “We are pleased to have a strong advisory services program, but more importantly, one that had enabled to support Romania’s structural reforms and European aspirations. The program had a high degree of impact, as can be seen at the national, regional and local levels.”

One example is the first online platform for paying taxes in Romania launched in 2014 to decrease the cost of compliance while easing the way for paying taxes introduced under a 23-month engagement establishing a Delivery Unit in the Prime Minister’s Chancellery. The implementation of the platform also led to the introduction of an innovative, SMS-based citizen feedback mechanism to garner feedback on the quality of services, and resulted in an 86 percent improvement of citizens’ perception of tax services provided in Bucharest.

Under the advisory services for Harmonizing State and EU-funded Projects with the Ministry of Regional Development and Public Administration, the World Bank helped redesign the largest state-budget funded investments program, with a portfolio of around $8 billion, following key best practices of European Union funded operational programmes. Multi-annual planning, multi-annual budgeting, clear prioritization criteria and a simple monitoring and evaluation indicator have now been introduced. 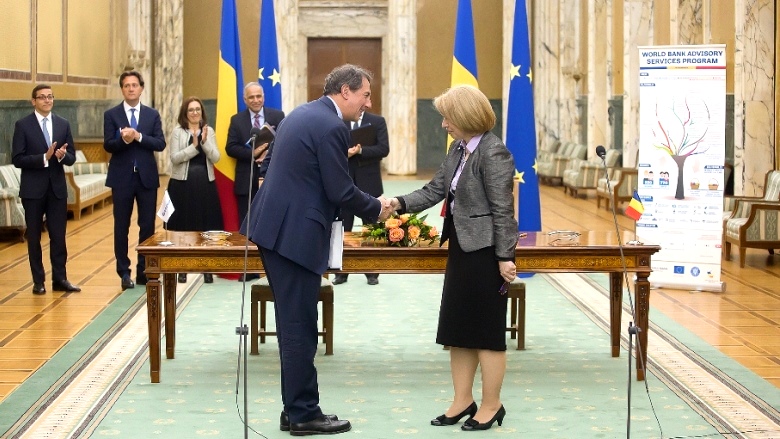 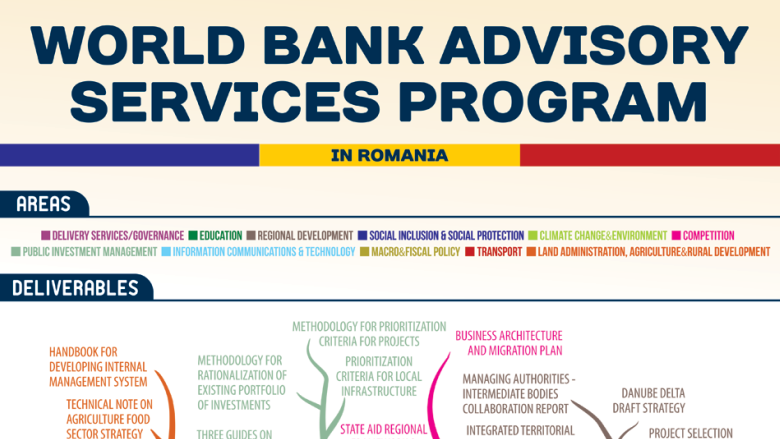