What can we learn from Africa's approach to forced displacement?

While the world has its eyes fixed on the heartbreaking refugee crisis resulting from conflict in the Middle East, a number of African countries struggle to cope with the challenges of hosting long-term refugees—Kenya is one of them. The plight of these refugees and Internally Displaced Persons (IDPs) in Africa—displaced within their own country—can no longer be ignored.

The reality is that the great majority of African refugee movements happen within Africa, with the burden of caring for these migrants falling on neighboring countries. The price tag for Kenya to look after the refugees in 2016? Around $230 million, according to estimates by UNHCR, the United Nations refugee agency. But time and again such appeals for humanitarian assistance for displaced persons in Africa go under-funded. It is time to think of how to finance such work differently.

The numbers are indeed staggering: Of the total 18 million displaced persons in Africa, more than 12.5 million are internally displaced persons (IDPs) living in their own countries. The IDPs and refugees share something in common: the agony and costs of being forced to flee their homes. A majority of them are children and youth under the age of 18, suffering loss and dislocation which will affect the rest of their lives. Some camps in Africa have been around for 40 years. Children born in these camps have nowhere to call home; in the course of living in these camps, these children have since become parents. Successive generations have grown up away from the reach of mainstream development efforts. And let’s not forget the host communities who have been very generous in allowing the refugees to live in their towns and villages. This causes us to stop and reflect.

We are moved by the barrage of images of millions of people parked in camps or other makeshift settlements. But given the prolonged duration of most displacements, it is time to recognize that we —governments, donors, civil society and the private sector— must evolve from strictly humanitarian responses and develop collectively long-term development solutions to promote self-reliance, integration of refugees, reduce aid dependency, and empower and support host countries and communities. 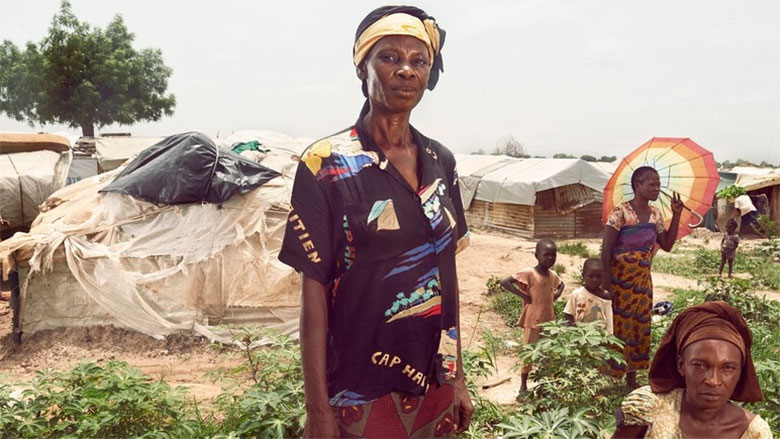 Women at the M’Poko camp for the displaced in Bangui, Central African Republic, home to around 20,000 IDPs.

The world has a lot to learn from Africa. And here are a few reasons why:

First, Africa has made more progress than any other continent in developing some of the most progressive legal frameworks around forced displacement. The “African Union Convention for the Protection and Assistance of Internally Displaced Persons in Africa” (better known as the Kampala convention), which came into effect in 2012, is considered a landmark for human rights. As of today, 25 states have ratified the convention which legally binds government to protect the well-being of IDPs.

Second, at the country level, select governments have recognized that the most effective way to deal with refugees is to allow them to participate in the local economy. Tanzania, for instance, has granted citizenship to 200,000 refugees, giving them access to land rights and allowing them to participate in the political life. So has Zambia, where the Government has granted residency, land access rights and socio-economic integration to long-term former refugees. In Uganda, which hosts the third-largest population of refugees in Africa, refugees are given small plots of land in villages and thereby integrated within the host community. They have the right to work and start their own businesses, an approach hailed by the UN as a “pioneering approach that enhances social cohesion.”

Third, at the regional level, African countries are beginning to collaborate and share their respective approaches to improve the living conditions of the refugees. The reason is simple: as soon as refugees cross borders, this becomes a regional issue. This coming week, government representatives from six nations of the Great Lakes (Burundi, Tanzania, Rwanda, Democratic Republic of Congo, Uganda, and Zambia) will gather to explore modalities for increased regional cooperation in support of solutions for forced displacement. This meeting, hosted by the World Bank, UNHCR and the UN Special Envoy to the Great Lakes, marks the first time these six countries will come together to discuss the issue and propose regional approaches.

What does it teach us? For development partners or humanitarian agencies, recognizing the need to focus on host communities, often located in poor and marginalized areas, may be the way forward. Hosting refugees or IDPs puts additional pressure on public budgets and social structures of recipient countries. Empowering local governments by enabling them to extend service delivery to settlements as well as host communities will be key. Sharing the benefits more broadly will increase tolerance towards their new neighbors. Affording opportunities for joint decision making through community-driven development approaches will give a voice to the voiceless while promoting social cohesion between the host communities and the displaced.

To help tackle this challenge, the World Bank is committing $250 million this fiscal year to provide support for communities hosting displaced people in the Democratic Republic of Congo (DRC), Ethiopia, Djibouti, Uganda and Zambia. In the Eastern provinces of DRC, a region devastated by years of conflict, creating short-term and longer-term livelihoods opportunities to the displaced populations and their host communities —both in areas of displacement and places of return— will improve the social contract between Government and citizens and help consolidate the peace process. In the North East of Nigeria, which hosts 1.8 million IDPs as a result of the Boko Haram insurgency, we are committing half a billion dollars to improve access to health, education and livelihoods to IDPs and host communities and to help support their safe and voluntary return.

It’s important to recognize that the refugee crisis is here to stay. Across the globe, thousands of people are risking their lives every day in a desperate attempt to escape conflict and violence – and hundreds are perishing in their desperate quest for a better life. A development approach to displacement must be put in place to ensure that the displaced, including the youth among them, can lead productive lives outside the camps. It's time to think outside the box. Africa’s experience in addressing this challenge can help guide the formulation of global approaches.

This article was first published on the World Economic Forum's website.