What You Need to Know About Oceans and Climate Change 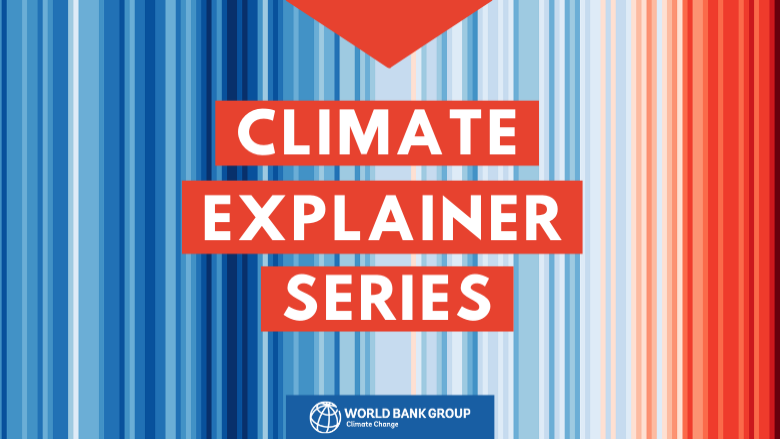 Oceans play a critical role in regulating the climate, but how healthy are our oceans today and what kind of impact is climate change having? We sat down with Charlotte De Fontaubert, Global Lead for the Blue Economy at the World Bank, to learn about the state of our oceans and what the World Bank is doing to help keep them healthy and productive.

How does climate change affect oceans?

Climate change is a major threat to ocean health globally, and one that adds to other ongoing anthropogenic threats – in other words, environmental changes caused by human activity. We are starting to understand these impacts better and learning more about the extent and scope of the problem. First, climate change is causing some serious changes in oceans, including temperature increase, sea level rise, and acidification. Significant changes in ocean current patterns are also occurring. All these factors impact ocean health and marine species. For instance, coral reefs, which are critical marine ecosystems, are threatened by a trifecta of acidification, increasing sea temperatures and sea level rise. But acidification is also a much broader issue since it disrupts carbon sequestration by other species including mollusks and crustaceans. Changing ocean current patterns threaten recruitment of fish stocks – the number of fish born in a given time frame that reach the juvenile stage – with very real and direct impacts on coastal communities that depend on these resources. The impacts of climate change on oceans are therefore myriad, complex, and interrelated.

What role do oceans play in mitigating climate change?

Oceans are the largest heat sink on the planet. They absorb 90% of the excess heat caused by climate change. Oceans are also a very efficient carbon sink, absorbing 23% of human-caused CO2 emissions. Ecosystems such as mangroves, which grow in coastal areas but with roots in sea water, as well as tidal marshes and seagrass meadows, all sequester and store more carbon per unit area than forests. We also know that some carbon particles have been sequestered in seabed sediment over millennia, though that phenomenon is not as well understood or even measured.

But the role of oceans as a carbon sink is directly affected by the impacts of climate change on ocean health, creating a vicious cycle. As it is, we are only just beginning to understand the importance of the ecological functions of oceans, yet climate change is already impacting them.

"The impacts of climate change on oceans are myriad, complex, and interrelated."
Charlotte De Fontaubert
Global Lead for the Blue Economy, World Bank

What role do oceans play in climate change adaptation?

Coastal zones are very high energy areas -- think about tides or wave action – and to protect coastal communities, these incessant forces must be managed. You can manage them by building gray infrastructure such as jetties or seawalls, or you can use green infrastructure such as mangroves, or a combination of green and gray infrastructure.  New research in Bangladesh estimates that, in a powerful cyclone, mangroves would reduce the rise in seawater levels between 4 and 16.5 centimeters and bring down water inflow speed to between 29% - 92%. So, communities can really benefit from the protection of mangroves.

What is the World Bank doing to support ocean health?

The World Bank has developed the Blue Economy approach, which focuses on the sustainable and integrated management of coastal and marine areas in healthy oceans. Our multi-donor trust fund, PROBLUE, supports governments in their efforts to improve fisheries, address marine pollution, manage coastal resources, and limit the impacts of key sectors such as tourism, maritime transport and offshore renewable energy on ocean health. This is a critical agenda for the Bank. , and this number is expected to double to $3 trillion by 2030. . For instance, we are helping our client countries develop new, more sustainable approaches to coastal tourism linked to marine protected areas. We also support more than 105 million hectares of marine protected areas where human activities are managed in a significant way, including core areas where all activities are restricted.

We are also focused on the decarbonization of shipping. Many ships run on bunker fuel – the dirtiest form of fossil fuel used today.  And as oceans recover, we work to develop alternative livelihoods for the impacted communities as they adapt to current and future changes driven by climate.

And last but not least, we focus much of our efforts on reducing and managing marine plastic pollution. Plastics are yet another threat to ocean health and one of the most visible. Plastic pollution is caused in part by poor solid waste management, but we are tackling the problem throughout the plastic value chain, from production to switching to a circular economy and, if all else fails, beach clean-ups. Because the task is daunting, many parts of the World Bank Group need to be involved and we have much more to do, but if marine plastics are not tackled in earnest, oceans will simply not be able to play their vital role in mitigating climate change.

What will it take to ensure oceans are healthy and can help us fight climate change in the future?

The Bank is not alone in this endeavor and we can see a growing global commitment around the effort. A few countries have set ocean health targets as part of their nationally determined contributions to the Paris Agreement – and many more should do so. Some countries are adopting integrated ocean planning that looks at the development of various oceanic sectors in an integrated and sustainable way. This is the break from business as usual that needs to take place: we simply cannot continue on the path that has brought us to this point. At COP26 in Glasgow, negotiators approved new rules for carbon markets that could help better value ocean-based carbon sinks such as mangroves and coral reefs and create incentives for their preservation. There is no silver bullet, but we can and must continue working together to restore ocean health.