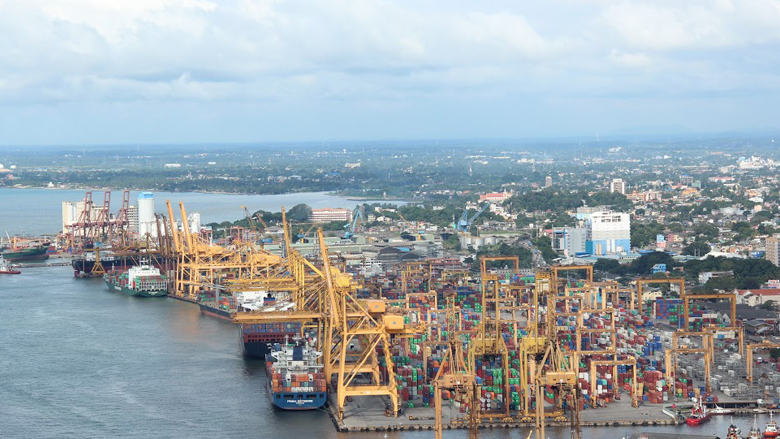 To understand poverty in Sri Lanka requires that we take into account both the successes and the challenges that remain. It also asks that we innovate, using tools—from high resolution satellite images to poverty maps—to create the in-depth analysis that can inform policy and spark conversations on how this vibrant island-nation can overcome poverty.

In this two-part Q&A, David Newhouse, a senior economist with the World Bank, takes questions on how poverty is measured and why Sri Lanka needs to update its current poverty line. He also identifies key areas of concern, in particular how the unequal spatial distribution of wealth has seen communities left behind in certain parts of the island. He concludes by offering insights from the research that could help Sri Lanka build on its considerable successes.

Q: How is poverty measured in Sri Lanka?

A: In Sri Lanka, poverty figures refer to the share of individuals whose household per capita consumption falls below the official poverty line. This poverty headcount index is the standard measure of the incidence of poverty.

The headcount index is calculated by taking into account all the food and non-food expenditures collected in the Household Income and Expenditure Survey (HIES). Differences in the cost of living across different districts, and the number of people in the household are also considered.

This per capita household consumption is then compared to the national poverty line. This line was defined as the expenditure for a person to meet the daily calorie intake of 2,030 kcal based on the Cost of Basic Needs approach, and was set at Rs 1,423 in 2002. To keep the national poverty line constant, this line has been inflated in subsequent years using the Colombo Consumer Price Index (CCPI).

Sri Lanka’s current poverty line is moderate by regional standards, but below what one might expect from a country at Sri Lanka’s level of development. This is partly because the poverty line was developed using 2002 data and is therefore based on consumption patterns in 2002. The country’s context has changed dramatically in the years in between, and we believe it is good practice to update the benchmark used to judge poverty about once per decade. This makes updating the current poverty line a priority for Sri Lanka.

Q: What is the absolute international poverty line and how does Sri Lanka compare with other countries in the region?

Between 2008 and 2015 the absolute international poverty line was set at $1.25/day in 2005 dollars. However, in 2015 the World Bank updated this from $1.25 to $1.90 per day, in 2011 dollars, to reflect the changes in the estimated purchasing power of the dollar in poor countries between 2011 and 2005.  In both cases, the line was set based on the national poverty lines of 15 very low-income countries, converted to US$ using purchasing power parity exchange rates (more details can be found here)

Q: How has Sri Lanka fared in its poverty alleviation efforts in the post-war context?

A: Sri Lanka’s efforts in reducing poverty have been praiseworthy.

Excluding the Northern and Eastern provinces, headcount poverty fell from 22.7 percent to 6.1 percent between 2002 and 2012/13. In that same period, extreme poverty in Sri Lanka decreased from 13 percent to less than 3 percent in 2012/13— lower than many of Sri Lanka’s neighbors, other post-conflict countries, and other comparable countries.

This increased welfare is reflected in higher ownership rates of durable assets among poorer households. For instance, between 2006/7 and 2012/13, ownership rates of refrigerator, motorcycle, washing machine, computer, and telephone more than doubled among the bottom 40 percent. One of the most dramatic shifts occurred in cell phone ownerships, as the share of the bottom 40 percent that owned a mobile device rose from 13 to 76 percent.

However, spatial variations in the distribution of poverty represent a challenge. 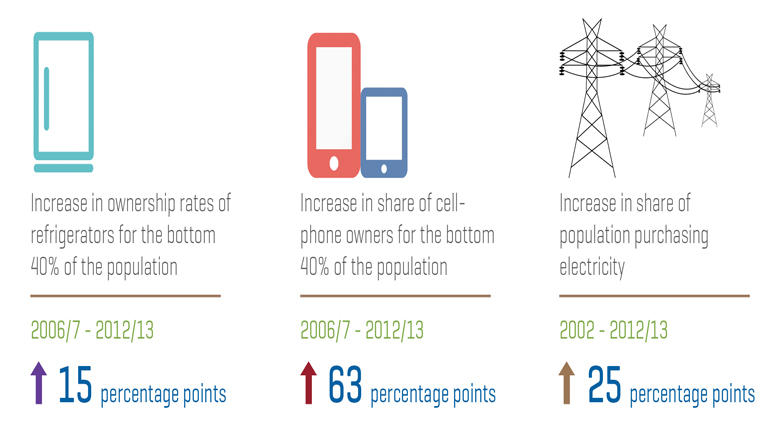 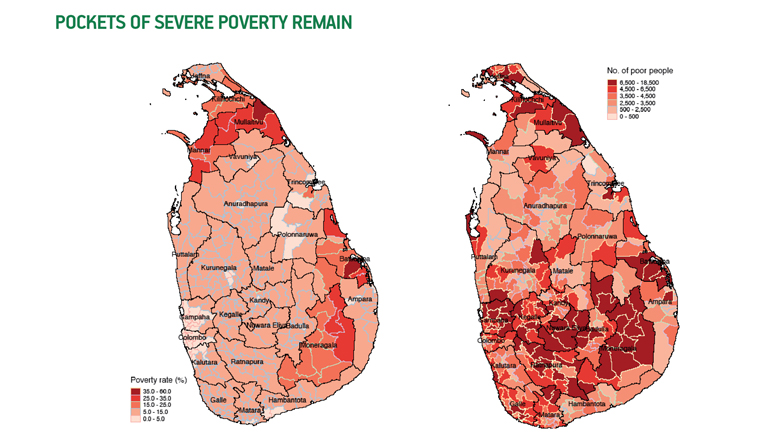 Q: What is the spatial distribution of poverty and how has it shifted over time in Sri Lanka?

A: Data from the 2011 Census of Population and Housing (CPH) and the 2012/13 Household Income and Expenditure Survey (HIES) reveal differences in the incidence of poverty across Sri Lanka’s 25 districts and 300 odd divisional secretariat divisions.

The data reveals three main pockets of poverty. The first are the former conflict districts in Northern Province, Mullaitivu (28.8 percent), Mannar (20.1 percent), and, to a lesser extent, Kilinochchi district (12.7 percent). The second is Batticaloa district (19.4 percent) in Eastern province, and the last one is Monaragala district (20.8 percent) in Uva province.

Between 2002 and 2012/13, different districts also reported different rates of poverty reduction – the most notable results came from Kalpitiya, Mundel, and Vanathawilluwa divisions in Puttalam district, as well as in Badulla and Hambantota districts. In contrast, most DS divisions in Monaragala, Colombo, and Gampaha made little progress in reducing poverty. In fact, many pockets of high poverty existed even in affluent districts, including Colombo. More information on the spatial distribution of poverty in Sri Lanka can be found here.

Q: The report notes that the highest poverty rates do not necessarily contain the largest number of poor people. Could you elaborate on that?

A: It is also important to keep in mind that although these pockets contain the highest incidence of poverty, that most of the poor live in populous and relatively affluent districts such as Kurunegala, Ratnapura, and Kandy. Kurunegala, for instance, is home to 7.7 percent of the country’s poor people even though only 6.5 percent of its population lives under the official poverty line. In contrast, Mullaitivu and Mannar, where estimated poverty rates are very high (28.8 and 20.1 percent, respectively), account for only 3.4 percent of poor people nationwide due to their small populations. The same is true at the DS division level, where large numbers of poor exist in Gampaha, Nuwara Eliya, and Ratnapura districts. This distinction is important because investment in infrastructure and other public goods may more effectively be targeted to areas where most of the poor live.

Q: What are the underlying causes of regional disparities in wealth and opportunity?

A: More research is needed to understand why there can be such dramatic variations even between districts that adjoin each other. What we know is that the poor and near-poor tend to be rural, young, and disconnected from productive earnings opportunities.

The rural sector accounted for over three quarters of the country’s population and over 85 percent of poor Sri Lankans nationwide in 2012/13. HIES data highlights an issue with educational qualifications among the bottom 40 percent, and unemployment in this group tends to be exceptionally high.  If this pool of abundant, young, and cheap labor is not fully utilized, the combination of high youth unemployment and a young poor population has the potential to threaten social stability.

Critically, among those poor and near-poor that are employed, a large proportion is engaged in agriculture—a field with typically fewer opportunities to add value to products and lower wages than service or industrial jobs. Agriculture still employed about 28 percent of the working population in 2015. This reinforces the case to accelerate Sri Lanka’s structural transformation, and ensure that young people have the means and ability to obtain work in more productive jobs in the industry and service sectors.

This ends Part I of our Q&A. Please click Part II for more. 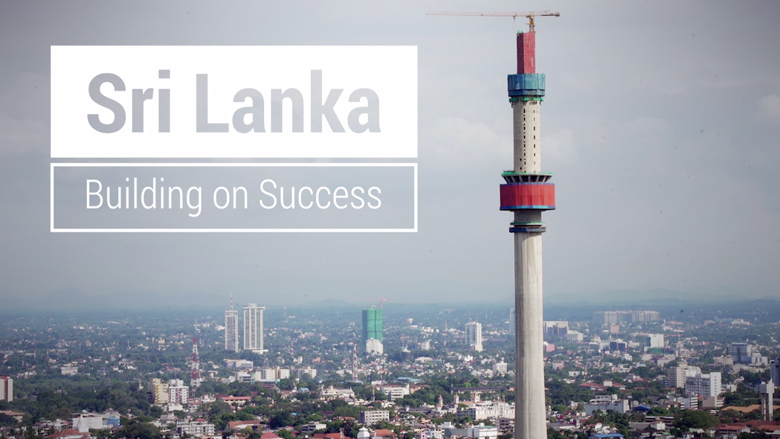