One-fifth of the global population lives with mental illness. Rates of mental illness are high in countries like Liberia and Sierra Leone, which are dealing with the scars of recent civil wars and the deadliest Ebola outbreak in history.

She raced out of the white tent, her family cheering and clapping wildly when they saw her coming. They embraced her, broke into song and praised God for sparing her life when so many others had lost theirs. As she climbed into the car to begin her journey home, they asked her what she would do next, now that she had survived Ebola.

“I will live to treat my patients,” she said.

Just weeks later, Klubo Mulbah, 44, with eyesight weakened by Ebola and persistent numbness and joint pain in her legs, returned to Grant Mental Health Hospital in Monrovia, Liberia, where she works as a physician assistant and mental health clinician.

Her patients, many of them living with schizophrenia and substance abuse disorders, “started rejoicing and dancing” when they saw her walk through the hospital’s gate, she said. Her patients and their families had repeatedly called her while she was in the treatment center and had visited her at home while she was recovering. Through it all, she had treated her patients over the phone, even while fighting a virus that has killed nearly 5,000 Liberians in the past two years.

In a country of 4 million people, Klubo is just one of about 160 health workers who have received any mental health training. She works at the only mental health hospital in the country, which has 71 beds and one psychiatrist, the only one in Liberia.

Close to 10% of the world’s population lives with mental illness, and WHO estimates that, during emergencies, as many as one in five people is affected by depression and anxiety. Although no recent statistics exist, a 2008 study—five years after Liberia’s civil war ended—found that 40 percent of Liberians had symptoms of major depression and 44 percent appeared to have post-traumatic stress disorder. Because of the dearth of mental health services in the country, few received treatment.

Then just 10 years later, the Ebola outbreak hit Guinea, Liberia and Sierra Leone, infecting more than 28,600 people and killing more than 11,300. The epidemic, which has continued to flare up, shattered the countries’ fragile health systems, closed schools, drove farmers from their fields, shuttered businesses and sent the countries’ economies into a tailspin.

Ebola also has deeply affected people’s mental health. When national statistics are available, the countries’ mental health experts expect that they will show that many, many thousands of people in Liberia and Sierra Leone need mental health treatment after surviving Ebola, losing relatives and friends to Ebola, helping the victims of Ebola, or simply living in the countries during this traumatic time. For example, of 233 Ebola burial team workers, ambulance drivers and contact tracers who participated in a Carter Center training in Liberia, 40 percent needed treatment for alcohol abuse.

Mariatu, 46, an Ebola survivor living in Rokupa, Sierra Leone, cries almost every day. She lost 10 family members to Ebola, including seven children and her husband. Mired in depression, she said she has thought about taking her own life. Her life—marked by violence and war, poverty, and Ebola—has been difficult. During the civil war, the rebels chopped off one of her husband’s arms. The family fled to Freetown. A dozen years later, their neighborhood became an Ebola hotspot.

“Ebola was more devastating for us than what happened during the war,” she said.

Her 13-year-old daughter, Adama, also an Ebola survivor, comforts Mariatu when she cries.

After Sierra Leone’s civil war ended in 2002, a survey found that more than 12 percent of people were living with mental health disorders, notably schizophrenia, depression, anxiety and substance abuse. But, Dr. Muana said that the real number is much higher, since those living with mental illness are often hidden by their families or sent to traditional healers. At least 150,000 more people have developed mental illness because of Ebola, Dr. Muana said.

Sierra Leone Psychiatric Hospital has been standing since 1823, said to be the first mental health hospital in Sub-Saharan Africa. During the civil war, most of the buildings were destroyed and some of the patients went to the warfront. Today, the facility is a maze of colonial walls and newer structures.

After undergoing treatment for three months, most patients are ready to be released—but many no longer have a home to return to. Most have been in the facility for between five and 10 years, Dr. Muana said, because their relatives have abandoned them, scared of the stigma that mental illness carries.

Marie, 55, a mother of nine, is one of those patients. She could have left the Freetown facility four years ago but her daughter will not respond to the facility’s phone calls.

“I’m still hopeful that they might come one day,” Marie said of her family.

Every day, at the end of a row of a dozen beds in the women’s ward, she sits and talks with the staff and waits. Even though she longs to return home, she is grateful for the care she is receiving.

“I’m happy when I’m here because it means I’m getting care and treatment,” she said. 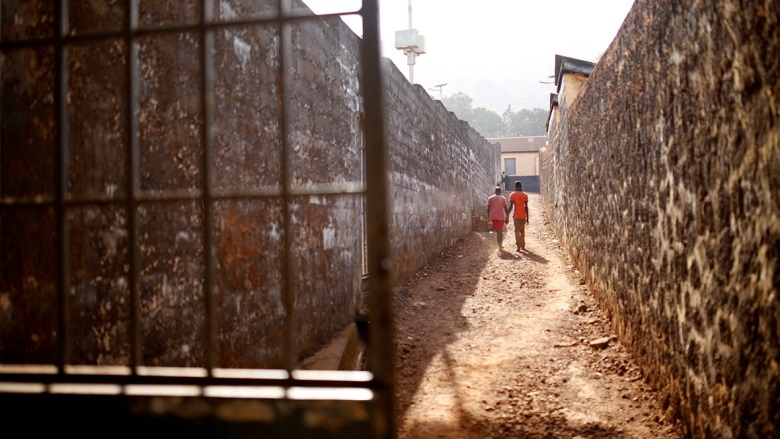 A health worker walks with a patient at Sierra Leone Psychiatric Hospital, the country’s only mental health facility.

Marie receives regular medication to control schizophrenia. Many patients do not have the same experience. Psychotropic drug shortages plague Sierra Leone and Liberia. Most of the time, Grant Mental Health Hospital in Liberia is out of drugs, making it impossible for the facility to treat their patients, who require regular medication to recover and maintain their recovery.

In Liberia, The Carter Center, with a World Bank-administered $2.75 million grant from the Japan Social Development Fund, is training 700 health workers and is supporting 6,500 people in 30 communities who have mental health and psychosocial needs. A special focus is deploying 100 trained child and adolescent mental health clinicians to schools, communities and health facilities—something that has never been done before.

Also in Liberia, to address the psychosocial needs of children, Mercy Corps, with the support of the Ebola Recovery and Reconstruction Trust Fund at the World Bank, is implementing its Comfort for Kids program to build local capacity to support Ebola-affected children.

On a breezy day in March, 22 nurses, physician assistants and registered midwives in white uniforms sit in a classroom at John F. Kennedy Medical School in Monrovia. Dr. Janice Cooper, project lead and country representative for The Carter Center’s Liberia Mental Health Initiative, and her colleague, Peter Musa, a training officer, are encouraging their students to probe a patient’s family history to better understand “why he feels less than himself.”

For all of the students, this six-month training is their first exposure to mental health training. Treating patients who were dealing with sexual and gender-based violence—and being unsure of how to care for them—inspired Lorpu Gayflor, 35, an emergency and pediatric nurse in Grand Bassa Country, to apply for The Carter Center program. During the full-time training, the government pays her salary.

“Mental health is interesting because treating a patient with medicine, sometimes they don’t get better,” she said. “But when you understand the underlying cause you can treat them and they get better.”

She said that she feels that “almost all” of the patients she treats are living with mental illness.

“I hope this training is standard for all health care professionals,” she said.

Mental health starts in the community

At Mount Barclay Clinic in Monserrado County, most of the community health clinic’s workers have gathered in an open-air shelter to self-test their perceptions of mental illness, which will be followed by an in-depth anti-stigma clinic. One of the participants is Sarafina Borbor, a 23-year-old community health volunteer.

Sarafina goes from home to home, educating community members on a variety of health issues, encouraging them to go to the health center for treatment, and ensuring that the most vulnerable are treated with dignity and get the care they need. She said that many people in Mount Barclay are living with mental illness, and after Ebola traumatized her community, even more are suffering.

The Carter Center training taught her that “they shouldn’t be thrown away,” Sarafina said. “These people are useful in our society. We need them like they need us. What matters is to see them back on their feet.”

Recently a school in Mount Barclay tried to expel a student who had epilepsy. Sarafina convinced them to let the girl stay.

The government of Liberia developed a national mental health policy in 2009 that focuses on communities, which experts believe is the most effective, efficient and sustainable way to deliver care and respond to health events, like Ebola. However, the implementation of this policy has been difficult because the country has too few trained mental health care workers and lacks resources to cover the costs of this care. Non-governmental organizations like Médecins du Monde, the Center for Victims of Torture, the Peter C. Alderman Foundation, Urgent Action Fund-Africa and The Carter Center are trying to bridge the gap.

“Before, the issue of mental health was not being discussed,” said Dr. Yatta Wapoe, the community health officer for Monserrado County. “But now that mental health clinicians are in the facilities, things have changed.”

“Ebola spread because of a lack of social cohesion,” said Dr. Cooper. “We need to build up trust in communities.”

Vivian, a 26-year-old Ebola survivor, is a social worker at C.H. Rennie Hospital in Margibi County, Liberia, who was trained by The Carter Center in 2015. She describes herself as depressed, and wakes up every night with nightmares about her time in the Ebola treatment center and anxiety about the stigma she continues to face as an Ebola survivor. She attends The Carter Center’s psychosocial support sessions every Friday.

“They help me,” she said. “This is what I did to forget. But I’ve not yet forgotten completely.”

She hopes her work as a social worker will help those living with mental illness navigate the stigma they battle in their communities.

Mental disorders impose an enormous disease burden on countries: Depression alone is the single largest contributor to years lived with disability globally. These disorders also have huge economic consequences: In 2010, depression cost at least $800 billion in lost economic input—and this figure is expected to more than double by 2030. The foregone economic output, globally, because of mental, neurological and substance use disorders, is in the trillions of dollars.

In April 2016, the World Bank and the World Health Organization will host an international meeting on global mental health, with a focus on scaling up implementation of mental health services for depression and anxiety in primary care and community settings.

Isatu, 46, who has been treated at Sierra Leone Psychiatric Hospital for 20 years, started teaching grades 1 and 2 at a nearby school after a nurse helped her get a job.

“After much treatment I was able to start teaching again,” she said. “I love teaching. It’s a career I’ve loved since I was a little girl.”