Sweeping steppes, white, snow-capped mountains, sparkling frozen rivers—Mongolia’s winters are beautiful. But they can be harsh as well. The temperature regularly dips below minus 40 degrees Celsius (-40°C). In extremely cold winters called dzud, livestock die and herders lose their livelihoods.

From 1999 to 2002, a succession of dzuds followed by summer droughts killed 30% of all livestock in Mongolia. In 2010, 8.8 million livestock were lost to dzud, an equivalent of 4.4% of the country’s economic output.

After the devastating dzuds in 1999-2002, the government of Mongolia worked with the World Bank to look for solutions to better protect herders from climate related losses to their livestock. In 2006, the Index-Based Livestock Insurance Project was launched initially in four aimags (provinces). In 2010, when another dzud hit Mongolia, it was expanded to cover all 21 aimags. This was the first time such a system was implemented in the world.

The project introduced a new insurance scheme where payments are based on the total number of livestock lost by species and soum (district) rather than on households’ actual, individual losses. The index is compiled and maintained by the country’s National Statistics Office (NSO).

The insurance program is a combination of self-insurance, market based insurance, and social safety net. Herders bear the cost of small losses that do not affect the viability of their business while larger losses are transferred to the private insurance industry. Only the final layer of catastrophic losses is borne by the government.

Since the program started, insurance policies have become more and more popular among herders. Every year there is an increase in the number of policies bought.

About 19,500 herders purchased the insurance during the 2013-2014 cycle, an increase of 21% over the past cycle. All herders eligible for compensation got indemnity payments.

The new insurance system also provides strong incentives to individual herders to continue to manage their herds in face of disasters to minimize negative impacts. For example, if a herder suffers no losses while his neighbors lose a large part of their herd after a dzud or a drought, the better herder is rewarded for his extra effort and receives a sum based on the losses of the whole area.

M. Purevjav, a herder in Ulaan Uul County, bought his insurance policy in the winter of 2014.

“In 2013, several families bought polices for the new insurance program. District officials counted all the animals in the county—about 1,200 in all. If the loss of livestock surpasses 6% of the total count, all the insured families got paid. It did and the money came through,” Purevjav said.

Getting people like Purevjav to understand how the new insurance works is not easy. Activities such as radio campaigns, local presentations, and the distribution of pamphlets and newsletters help promote awareness and understanding. But personally speaking with herders always works better.

Ch. Hunbish, a sales representative of Tenger Insurance, travels from valley to valley on his motorcycle, meeting herder families to explain the concept of index-based insurance.

“There is very little room for ambiguity in such a system. It prevents insurance companies from not paying on time. It also prevents individual households from making false claims,” he said.

Thanks to such efforts, 65.5% of herders nationwide are now aware of the product.

The winter in 2014 was mild. Purevjav’s herds fared well so he didn’t get indemnity payments. But he understands that it is how index-based insurance works.

“This system protects us against big disasters. When hundreds of animals die, we can expect a return,” Purevajav said. “It helps when we are on the verge of total ruin.”

" This system protects us against big disasters. When hundreds of animals die, we can expect a returnd. It helps when we are on the verge of total ruin.” "

Traditional insurance products that cover livestock mortality were not only unpopular with both insurance companies and herders, it also proved ineffective in Mongolia. Because it was based on individual losses, herders can be tempted not to take effective measures to protect their stock or to falsely report deaths. It was difficult for insurers because monitoring individual herders in the vast territory of Mongolia is almost impossible. Only a small number of high value livestock were insured.

“In a market-driven economy, with such a big number of livestock perishing in the Mongolian winters, traditional insurance models simply could not work. They were not financially viable,” said Ya. Ulziibold, Director of the Index-based Livestock Insurance Project.

M. Munkhbaatar is the Director of Branch Control Department of Bodi Insurance, one of the seven insurance companies that are participating in the project. “We used to have many problems verifying individual claims,” he said. “How can we verify livestock deaths in remote areas? It often involved collecting a lot of proof and documentation which was not always reliable or easy.”

“With the index system we simply rely on the statistics. It’s a much simpler process that leaves less room for error. It benefits the herders. It also makes better business sense for the insurance companies,” he added.

Under the project, insurance companies also receive training on core insurance skills, such as actuarial, which helped improve their overall business. Sales agents like Ch. Hunbish were trained and certified before being approved to sell the insurance.

Kh. Gantsogt, State Secretary of the Ministry of Finance said, “We found a way to guard against severe winters and droughts. This was the greatest result of the project.”

“Previously, herders thought only in two ways: they interpreted losses as fate, or expected the government to step in with relief. It was a no win situation. Now they have a choice and a system that works,” he said. 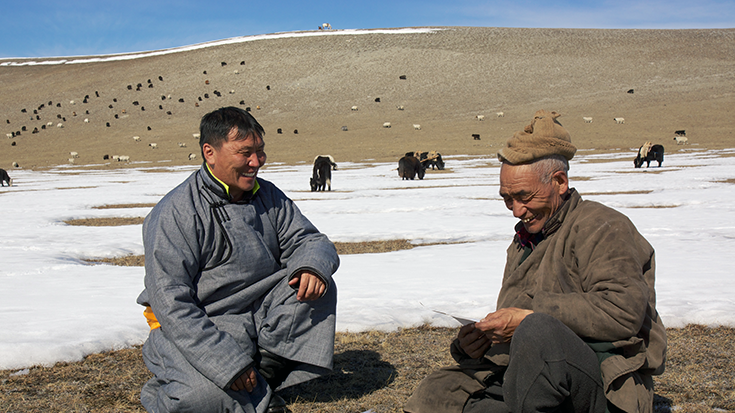 A New Model to Insure Livestock in Mongolia