Working for a World Free of Poverty
Events
Seminar "Asia and Latin America: The Rising South or the End of an Era?"
May 13, 2016Tokyo
Co-organized by the World Bank and the Asian Development Bank Institute (ADB Institute) 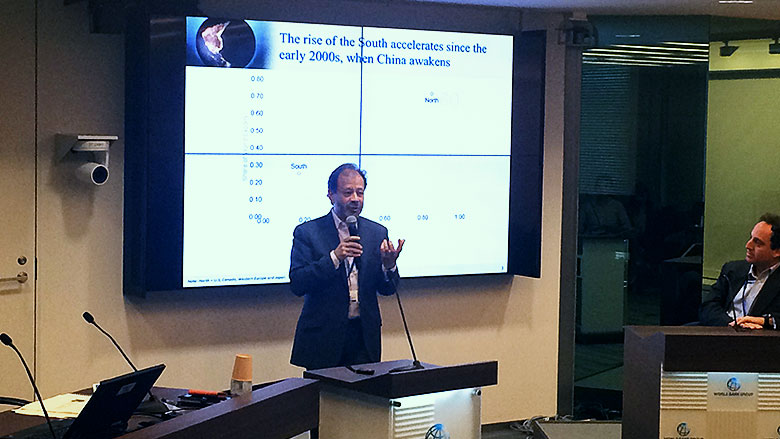 World Bank and Asian Development Bank Institute (ADBI) co-organized a seminar “Asia and Latin America: The Rising South or the End of an Era?” on May 13, 2016, on the occasion of the visit by Augusto de la Torre, World Bank Chief Economist for Latin America and the Caribbean.

In the last two decades alone, wealth has shifted so profoundly that the simple, old North-South hierarchy—where the North were the rich few and the South were the many poor countries of the world—is no longer a given. During the commodity boom of the 2000s, average growth rates in Latin America and the Caribbean reached nearly 5 percent. Moreover, income growth of the poorest 40 percent was higher than in any other region of the world, relative to the total population, making growth also equitable. Global economic activity, however, has slowed down since then and medium-term growth prospects for countries in the region have diminished considerably. This poses new challenges to all developing economies, not only those in Latin America. Indeed, disappointing growth in major emerging economies around the world raises important concerns, threatening the social gains achieved in the past 15 years, particularly considering that two thirds of the extreme poor in the world still live in middle-income countries.

Yasusuke Tsukagoshi, Special Representative, Japan, World Bank, opened the seminar by delivering his opening remarks, followed by Augusto de la Torre, World Bank Chief Economist for Latin America and the Caribbean, delivered his keynote speech featuring a report “Latin America and the Rising South: Changing World, Changing Priorities” in May last year, Naoyuki Yoshino, Dean of the Asian Development Bank Institute (ADB Institute), served as a commentator. This seminar, jointly organized by the World Bank and the ADB Institute, was an effort to bring together influential analysts to discuss the future of the rising South, which has already left an indelible mark on the world economy.

Presentation Material: Latin America and the Rise of the South At a Crossroads (PDF)