October 20, 2015
World Bank Group
Pension reform in Albania helped elders who were living without a retirement. The reform also lift an antiquated ceiling, so that workers will now get pensions commensurate to what they pay into the system.

Albanian citizen Sose Kamberaj says that every bit of money helps in her country, where prices continue to rise.

Finally getting a pension-after years of living without one was a big relief, says Kamberaj, who’s 76 and lives in the city of Vlora.

“This pension helps me to take care of myself.  I feel happy with it because I didn’t get anything in the past. Before, when we only had my husband’s pension, we couldn’t cope. Now we can,” she says.

Recent changes to Albania’s retirement system allowed Kamberaj and thousands of other Albanians to receive so-called “social pensions.” These pensions are designed to help people over 70, who worked officially, but for less than 15 years, or people who have worked, but had not paid into the nation’s previous retirement plan.

" Before, when we only had my husband’s pension, we couldn’t cope. Now we can. "

The compensation is part of wider pension reforms aimed at enabling Albanians to better cope with economic difficulties. Albania’s government implemented the reforms, with technical support from the World Bank.

Under the reforms, a previous ceiling on the amount pensioners could receive has been lifted. This ensures that what people get upon retirement is more commensurate with what they’ve paid into the government retirement system over the years. 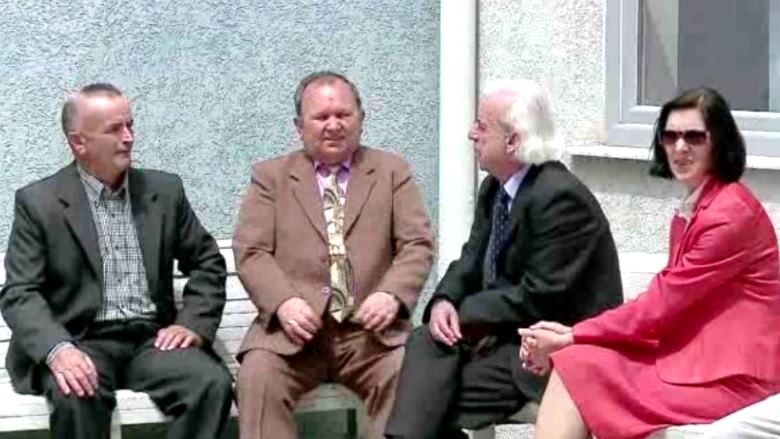 Elida in conversation with her fellow pensioners in Fier town.
“The pension reforms of 2015 have brought good changes. If I had retired under the old system, I would have received 24,500 Lek, whereas now I get 29,300, meaning 3,800 Lek more,” says Elida Qyrana, who worked as a construction engineer for more than 30 years in the city of Fier.

New pensioners, such as this former mid-school teacher, have benefited from the pension law changes which removed the ceiling - their pension is now calculated based on the working years and contribution.

In addition to immediately providing better retirements, the pension reform is expected over the long term to render Albania’s pension plan self-sustainable, as opposed to the largely state-funded plan of the past.

It does this by gradually raising retirement ages from 60 to 65 for women, to eventually equal that of Albania’s men. Under the reforms, people having worked in particularly laborious jobs - such as the country’s miners - will be able to retire at 55.

“The need to carry out the reforms in pensions was urgent because the scheme was in debt, with 40 percent being paid by the state budget,” says Vjollca Braho, Director of the Social Insurance Institute.

“Based on all the studies, it is believed that by 2038 the state will no longer be funding the share of the contributors,” she says.

25-year-old Ardit Alia is a manager at his family’s furniture-making factory in Tirana. He says the promise that he’ll get a higher retirement by paying into the system early on is what is motiving him to contribute monthly now.

And he is telling colleagues to do the same.

The promise of getting a higher retirement by paying into the system early on is a motivating factor for working age Albanians, which is expected over the long term to render Albania’s pension plan self-sustainable.