March 16, 2015
World Bank Group
Georgia is improving its road system in order to spur growth and diversify the economy, with support from the World Bank's Secondary and Local Roads Project.

Local roads knit a country together. Good roads mean farmers can get their produce to market in good condition more quickly, kids can get to school more easily, and those who need doctors can get to hospitals. Fast, safe, efficient roads are a person’s physical link with the rest of the world. Without good roads, people feel trapped, according to Tamar Chubinidze, a teacher from the village of Sazano in western Georgia.

“The bad road here used to be a major problem," says Tamar. "One couldn’t move around in the town. Also, when there would be a medical emergency, ambulances were not able to arrive quickly.”

Reducing the Time It Takes to Go Places

Georgia plans to improve 200 kilometers of local roads, which will reduce travel time by about 20 percent on average. About 150,000 Georgians are regular users of these improved roads, which are also designed to be safer for both drivers and pedestrians.

Rural Georgians say they appreciate the upgrades, and they notice a difference in the traffic that moves through their villages and towns. Tsotne Nebieridze is an elementary school student. “Nice roads are very good,” he says. “Vehicles also move well. I remember before the cars would trudge to and fro.”

Milena Kobakhidze, also a student, agrees. “Traffic signs have been installed, too, which make us feel more safe. There’s a school nearby and when we come out of the school we feel more protected.” 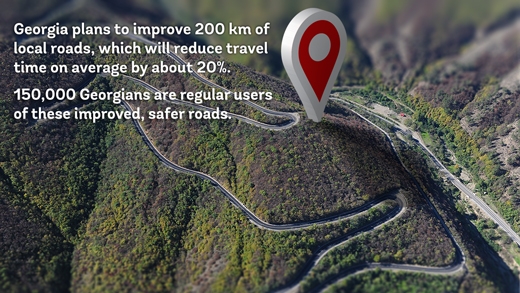 Though road safety across Georgia is improving, the country lags behind its more developed neighbors. Georgia’s roads-related death rate is four times higher than in the best performing countries. Laws requiring front seat belt use, stricter laws on drink driving, and improvements to roads and engineering standards have helped, but traffic volume is growing. Experts say deaths on the road are likely to increase.

“Safety components are present in all our projects,” explains Irakli Litanishvili, the deputy chairman of the Roads Department of Georgia. “During the project design, we carry out a safety audit. As you know, improved roads increase the speed of vehicle movement and in this context adequate traffic safety measures need to be implemented.”

New pedestrian crosswalks, road signs and speed limits help save lives. And, the government hopes the improved roads will speed economic growth. The safer and faster movement of goods and people will help rural Georgians to access new markets and opportunities.

Eka Laliashvili of the Georgia Alliance for Safe Roads says improvements to local roads will help spread prosperity throughout the country. “Implementation of such projects in the regions is very important because traffic is more or less streamlined in the capital and drivers and pedestrians are more or less informed. Therefore putting more emphasis on regions is important.”

With support from the World Bank, Georgia is improving its road system in order to spur growth and diversify the economy.

“We certainly have special support from the World Bank,” says Vazha Panchulidze, the chairman of the country’s roads department, “which is evidenced in the projects and cooperation that we have had with the Bank for several decades. We have managed to rehabilitate many secondary and local roads through these programs and financing.”

Georgia has also been investing in its strategic roads network, including the main East-West highway corridor. The focus now is on improving rural roads that will tie the country together and provide a more modern transportation system. 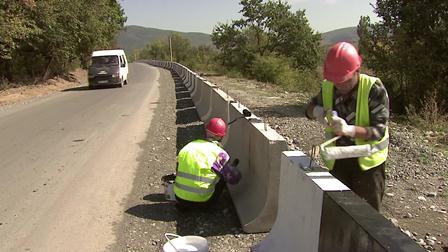 All Videos »
150,000
people in Georgia will benefit from improved local and secondary roads.
Source »