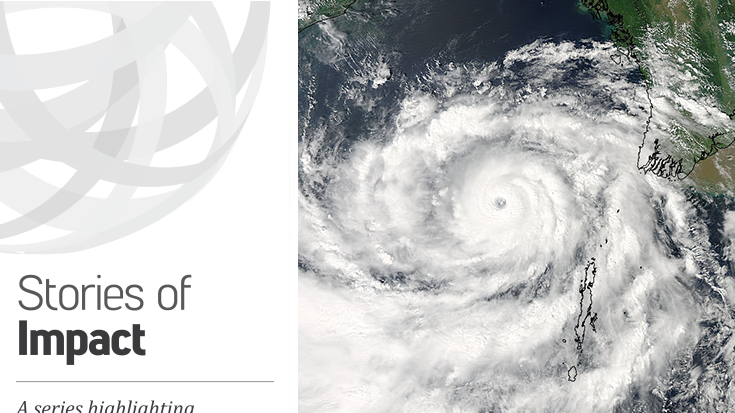 Cyclone Phailin, the strongest cyclone in nearly a decade and a half, made landfall in Odisha, India on October 12, 2013, with a Category 4 rating. Three-meter storm surges and sustained wind speeds of well over 200 kilometers per hour battered the coastline for hundreds of kilometers. But amazingly, fewer than 50 lives were lost, a dramatic reduction from historical precedents.

The limited loss of life was largely due to effective disaster risk management and preparation by the Government of Odisha, along with support organizations, which enabled a massive evacuation of residents from vulnerable coastal areas. The World Bank and the Global Facility for Disaster Reducation and Recovery are supporting the strengthening and scaling up of these efforts through the National Cyclone Risk Mitigation Project (NCRMP).

Cyclone 05B in 1999 was the most powerful tropical cyclone ever recorded in the North Indian Ocean, bringing catastrophic losses in human life and property throughout the state of Odisha and surrounding areas. With nearly 10,000 fatalities and $5 billion in property damage, the tragedy emphasized the need for improved resilience and risk-preparation.

Because of sustained efforts by government agencies, civil society, and partners like GFDRR, the effects from the similarly-intense Cyclone Phailin in 2013 were considerably less severe. However, vulnerabilities in the region remain — more than 12 million residents were directly affected by the last major storm — and India is looking to improve social preparadness and economic resilience for future cyclonic events.

Since 2011, GFDRR and the World Bank have helped fund the $255 million NCRMP, the first preventative disaster risk management initiative in India. Working in conjunction with the Governments of Odisha and neighboring Andhra Pradesh, the project:

Successful disaster risk reduction can dramatically reduce casualties from natural hazards. The stark contrast in loss of life from the 1999 event and Cyclone Phailin clearly shows the dramatic potential of well-planned and carefully-executed disaster risk management initiatives. As changes in climate increase the size, strength and frequency of tropical storm systems, the coordinated efforts on behalf of the Governments of Odisha and Andhra Pradesh, GFDRR, and the World Bank to mitigate risk stand as an exemplary model for building disaster management capacity in vulnerable developing regions around the world.

Resilience is about more than the preservation of human life. Sustainable risk reduction also should aim for the preservation of livelihoods. As made clear by Cyclone Phailin's high economic toll — nearly $1.45 billion by last estimates — and the more than 400,000 damaged or destroyed structures, more work is needed on building stronger, safer communities that can better withstand powerful storms. Additionally, improved risk insurance instruments are needed to better absorb financial shocks and ensure that reconstruction funds are readily available.

Building on the exceptional success of past disaster risk management efforts, the State of Odisha is committed to pursuing a zero-casualty target for cyclonic and other natural disasters, entailing further penetration of early warning systems in rural areas and higher capacity for existing emergency infrastructure. For Phailin’s recovery effort, emphasis will be on creating more resilient structures and communities to lessen the financial impact of major disasters.

" The success of minimizing human casualties was due to the resolve of the State and our team’s preparedness. We recognize that each disaster is an opportunity to improve our resilience and risk measures.  "