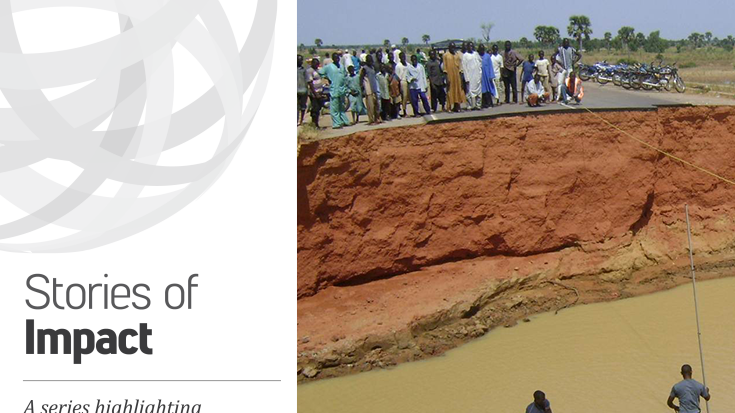 Mid-2012 saw record rainfall and widespread flooding within the Federal Republic of Nigeria, with unprecedented losses in human life and productivity. By the time the waters fully receded, more than 360 people had perished and nearly 4 million had been displaced, with economic damages and losses close to $17 billion in the 12 most affected states. Because of the scale and severity of the destruction, the Government of Nigeria mobilized the World Bank, the European Union (EU), the United Nations and other key partners, to conduct a comprehensive Post-Disaster Needs Assessment (PDNA).

The PDNA thoroughly analyzed the social and economic impact of the flooding, and provided the crucial framework for rapid response and recovery efforts. It was completed with financial support from the Global Facility for Disaster Reduction and Recovery (GFDRR), the Ministry of Foreign Affairs of the Grand Duchy of Luxembourg, and the EU in the framework of theAfrica Caribbean Pacific (ACP)-EU Natural Disaster Risk Reduction Program, an initiative of the ACP Group managed by GFDRR.

Nigeria often experiences heavy flooding. However, the size and frequency of these disasters and the resulting effects on residents and infrastructure are intensifying. Between July and October 2012, an unusually large burst of rainfall led to severe flooding over nearly the entire country, causing heavy casualties and massive displacement along with more than $9 billion in damages, and further economic losses in excess of $7 billion.

In the aftermath, there was an urgent need for a comprehensive assessment of both the immediate damages to communities and the long- term impact on the economy. The PDNA team undertook an in-depth analysis of the repercussions of the floods for the most affected states, which revealed an impact of 1.4% on gross domestic product (GDP). The PDNA ultimately consolidated losses and impact into an actionable final report, which:

Focused data enables rapid, effective response. The PDNA following the 2012 floods made clear the value of in-depth, sector-specific analysis of disaster impacts, which speeded targeted response and recovery efforts. These included consultations and surveys covering 4,000 households in over 300 settlements to assess social and livelihood impacts.

Partnerships are key to rapid, accurate assessments. The success of the PDNA resulted from effective collaboration among the many actors, including the UNDP, EU, UNICEF, the UN Human Settlements Programme, the International Labor Organization and others – highlighting the importance of technical and logistical partnerships.

The resources and information gathered by the PDNA showed the true extent of the devastation caused by the 2012 floods, increasing awareness that considerable regional investments will be needed to achieve long-term flood resilience.

" The increase in extreme floods throughout West Africa is a call for countries to refocus efforts on flood prevention and preparedness, not just response. The recovery and reconstruction process is an opportunity for governments to develop stronger preparedness planning and to build long-term disaster resilience. "

World Bank Director of Sustainable Development for the Africa Region