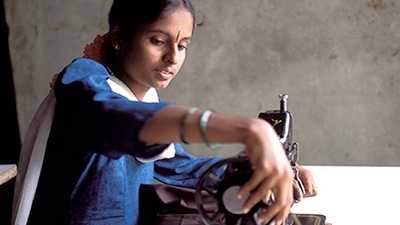 A young woman is being taught to use a sewing machine in class in India.

John Isaac / World Bank
Financial Inclusion (FI), which promotes access and the use of high-quality financial services, particularly among poor people, is crucial to achieving inclusive growth. Women disproportionately face financial access barriers that prevent them from participating in the economy and from improving their lives. The World Bank Group is working to promote financial inclusion for women to help achieve gender equity and poverty reduction.

Women make up 40 percent of the world’s workforce. Many of the sectors that are critical for economic growth in some of the poorest countries rely heavily on women. Small and medium-sized enterprises (SMEs) with female ownership represent 30 percent to 37 percent of all SMEs (8 million to 10 million women-owned firms) in emerging markets. These businesses have unmet financial needs of between US$260 billion and US$320 billion a year. This is their biggest barrier to growth and development.

Access to credit can open up economic opportunities for women, and bank accounts can be a gateway to the use of additional financial services. However, women entrepreneurs and employers face significantly greater challenges than men in gaining access to financial services.

The Global Findex, a comprehensive database measuring how people save, borrow, and manage risk in 148 countries, reveals that women are less likely than men to have formal bank accounts. In developing economies women are 20 percent less likely than men to have an account at a formal financial institution and 17 percent less likely to have borrowed formally in the past year.  Even if they can gain access to a loan, women often lack access to other financial services, such as savings, digital payment methods, and insurance. Restrictions on opening a bank account, such as requirements for a male family member’s permission, restrict women’s access to accounts. Lack of financial education can also limit women from gaining access to and benefitting from financial services. In addition, many women may have access to financial services in name only: A study in Pakistan showed that, although accounts might be opened in the name of a woman, the decision-making authority around the use of those funds often lies with a male relative. The World Bank’s Gender at Work report (2014) asserts: “On virtually every global measure, women are more economically excluded than men.”

Through technical/advisory assistance and lending support, the World Bank Group works to ensure the full potential benefits of financial inclusion for women are secured by:

The Women, Business and the Law project provides cross-country comparable data for 143 economies on where laws differentiate between women and men – a factor that can hinder women’s ability to gain access to finance

Through its technical and financing partnerships, the WBG has helped developing countries secure expanded benefits of financial inclusion for women. For example:

IFC’s development reach has been notable in calendar year 2013. IFC reached 41 million microfinance and more than 1 million small and medium enterprise clients. IFC’s investment and advisory services facilitated an estimated 11.6 million microfinance loans; 210,000 housing finance loans; and 2.7 million SME loans, for a total of US$11.4 billion, US$7.3 billion and US$91.3 billion outstanding, respectively.

Key challenges faced by countries in achieving financial inclusion for women include a lack of data and a lack of capacity. The availability of gender-disaggregated data is still limited, despite such important new surveys as the World Bank Group’s Global Findex, the Gender Entrepreneurship Markets (GEM) program, and Women, Business and the Law. Improved gender-disaggregated data, with stronger quantity and quality, will strengthen the business and policy case for financial inclusion for women entrepreneurs.

To ensure that countries have access to comprehensive technical assistance, capacity-building support and knowledge for meeting their national financial inclusion commitments and targets, Financial Inclusion Support Framework (FISF) was launched. FISF will cover such areas as MSME Finance, Financial Infrastructure, Financial Capability and Consumer Protection, Mobile and Government Payments, Remittances, and Agricultural Finance. More than 15 countries have already requested and received assistance. The FISF also has a knowledge component for Women and Financial Inclusion, which is currently in the design stage.

An assessment of a World Bank project including female migrant workers from Indonesia found that financial literacy training for both the migrant worker and the family member entrusted with receiving remittances, resulted in increased financial capability, higher levels of savings, and improved financial management.

The World Bank Group is supporting legal reform in the Democratic Republic of Congo to remove restrictions embedded within the Family Code which impede women's ability to make financial and business related decisions. The new Family Code will remove the legal requirement that married women need their husband's written authorization to open bank accounts, get loans, register businesses, enter into contracts, and initiate legal proceedings.

Also in Côte d’Ivoire, wives are no longer barred from being the legal head of household. Married women who previously could not claim tax deductions for their children or husbands can now claim the same deductions as married men, reducing their overall tax burden and enabling women to build their savings and investment potential.

In China, IFC works closely with Bank of Deyang to help extend its services to SMEs and support women-owned businesses in areas affected by the 2008 earthquake. In 2009, IFC approved a US$31 million equity investment to the bank. IFC has also provided gender sensitivity training to Bank of Deyang’s managers, and is helping make the business case for the women-owned SME market. As a result, the bank launched a microloan program for women, which has disbursed US$2 million to 322 women entrepreneurs, creating more than 1,000 jobs. The bank also opened the first branch exclusively dedicated to women, aiming to reach 4,300 women-owned SMEs and US$458 million in loans by June 2013. Bank of Deyang became the first Chinese bank to join the Global Banking Alliance for Women.

Empowering Women Through Microfinance in Tajikistan

Microfinance for Women in Mauritania