In 1989, Indonesia began a program to expand access to midwives in villages. The program, which continues to this day, trained and placed 54,000 midwives in communities around the country by 1998. Researchers evaluated the effects of the midwife program on educational attainment, cognitive abilities, employment, and life satisfaction of young adults who were children during the midwife program.

Shocks in utero or in early childhood may have profound effects later in life on health, education and overall socio-economic well-being. The impact can be greatest when droughts, flooding or other weather or disaster-related shocks make it impossible for pregnant women to get needed nutrition, or when very young children are similarly deprived. Programs to reduce the effect of shocks often focus on social safety nets that can help families afford food and other necessities, often through conditional cash transfers or public works programs. Less is known about the potential of regular and available public services – such as a health care center, or community midwife – to mitigate the effects of prenatal nutritional shocks. This evaluation collected data to understand the impact of midwife programs on children’s later development.

Indonesia’s village midwife program, which trains and places midwives in rural communities around the country, stands out as an effort to bring health care to remote areas. Prior research found that this program, introduced in 1989, improved the nutritional status of young children and improved women’s health and pregnancy. The Government of Indonesia, which continues the program to this day, wanted to know whether the presence and activities of midwives can also have a positive influence on children later in life in terms of education and employment. 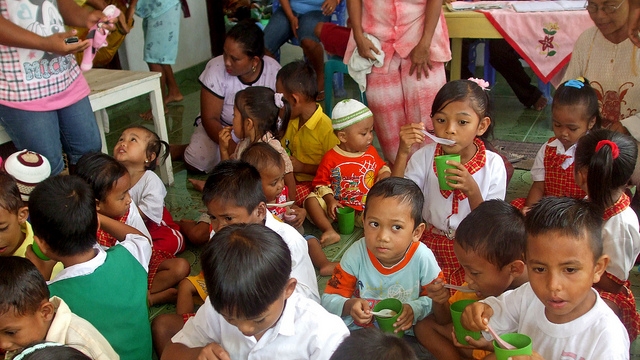 Indonesia introduced a program in 1989 to expand access to midwives in an attempt to improve women’s health and reduce deaths of mothers and their babies during birth. Between 1989 and 1998 when the program reached scale, 54,000 graduates of nursing academies were sent to under-served communities after receiving an additional year of midwifery training. These village midwives were expected to establish healthcare practices and be a health resource to residents. The government paid midwives for three years with the expectation that this would lead to a permanent and sustainable private practice within the community. The programs continues today.

The evaluation was quasi-experimental. The evaluation relied on data collected from the Indonesian Family Life Survey, first conducted in 1993 and then in 1997, 2000, 2007, and now in 2013/14. The survey, which follows 7,730 randomly selected households in randomly selected areas within Indonesia’s 13 provinces, collected data on 6,743 children under the age of five in the 1993 and 1997 rounds. For this evaluation, the research team studied 3,192 of these children born between 1989 and 1997, when the government placed midwives in communities. Researchers created comparable control and treatment groups from the Indonesia survey “enumeration areas,” with the control group consisting of areas that never had midwives. The evaluation used the survey data to study the impact of rainfall shocks on child health and growth status. Researchers evaluated whether the presence of midwives helped reduce the negative impact of rainfall and nutritional shocks on schooling and life outcomes.

This evaluation is relevant for Indonesia as it works to improve access to healthcare for the poor, including through expanding pre-natal care and monitoring, whether through midwives or better local health services.