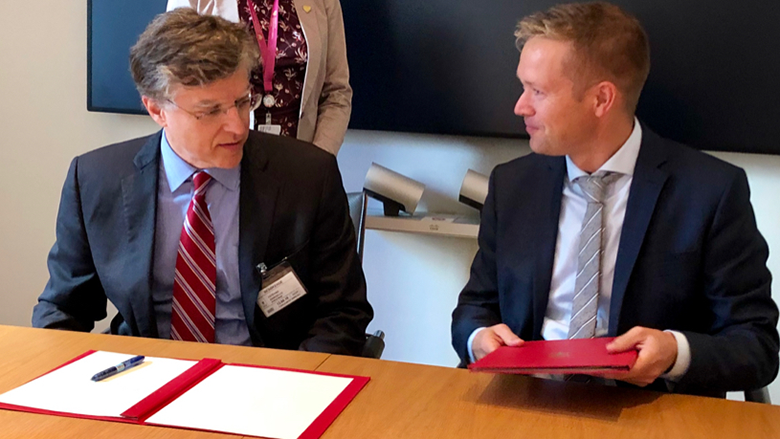 OSLO, NORWAY, September 12, 2019 - Norway has agreed to contribute NOK 88 million (equivalent to $10 million) to support the World Bank’s efforts to strengthen the tax systems and customs administrations in countries affected by fragility, conflict and violence (FCV).

The agreement will fund technical assistance to countries emerging from conflict, so they can rebuild their fiscal institutions and mobilize domestic resources to finance development. The work will emphasize reforms that can generate high revenue in a short timeframe—such as increased enforcement of customs duties and other simple, easy-to-collect taxes, and setting up basic administrative procedures for tax and customs administrations. Some countries that may benefit from this agreement include: Afghanistan, Niger and Somalia.

“It is estimated that up to 90 percent of the money needed to achieve the sustainability goals must come from national resources,” says State Secretary Aksel Jakobsen. “Robust tax systems are also essential to distribute resources better, so that countries in turn can manage without development assistance. This is the reason why the government over the past two years has doubled its efforts for better tax systems.”

Domestic resource mobilization is critical for FCV countries for several reasons: it enables sustainable development financing, and when linked to providing public goods, can enhance government accountability and state-building. But a wide range of challenges—such as distrust of government, lack of public accountability, weak administrative capacity and complex tax policies—prevent FCV countries from collecting the revenues they need. Twenty two out of 36 total FCV countries still have tax-to-GDP ratios below 15%, which is barely enough to carry out basic state functions. Moreover, even though customs can comprise 50 percent or more of a government’s revenues in some developing countries, the importance of a well-functioning customs administration is often overlooked.

“With the support of Norway, the World Bank will be able to tailor guidance to FCV countries so they can build resilience, strengthen fiscal capacity and reform institutions,” said Marcello Estevão, Global Director of the Macroeconomics, Trade & Investment Global Practice, who signed the agreement on behalf of the World Bank. “There is no one-size-fits-all solution for supporting tax systems in these situations. The World Bank is committed to respecting sovereign decision-making while encouraging good practices to help FCV countries break the cycle of dependence on external resources.”

The agreement signed with Norway is part of the support to the World Bank’s Global Tax Program, which was launched in September 2017 and is financed by a multi-donor trust fund and two single donor trust funds. The Global Tax Program covers tax-related activities across the World Bank’s portfolio and aims to enhance opportunities for coordination with other relevant stakeholders, including donors, civil society, and academic or research institutions.