MOSCOW, September 30, 2015 —The continued impact of the lower oil prices in a context of ongoing international sanctions will cause the Russian economy to contract by an estimated 3.8 percent in 2015, the World Bank said today in its latest Russia Economic Report launched in Moscow. The recession is having a severe impact on households as double-digit inflation erodes real wages and incomes and sharply increasing poverty rates. Medium-term growth prospects depend on how Russia will brave the difficult adjustment to this new economic reality. In the longer term, there is an opportunity for Russia to benefit from a structural transformation of its economy. However, without deep and sustained structural reforms, Russia will remain at risk of falling into a medium-term low-growth trap.

“The policy response by the authorities successfully stabilized the economy,” said Birgit Hansl, World Bank Lead Economist for the Russian Federation and the main author of the Report. “Monetary policy prevented costly delays in relative price adjustments, highlighting the importance of the central bank’s commitment to inflation targeting in the context of a flexible exchange-rate regime. The emergency measures to support the financial sector implemented by the government and the central bank provide short-term relief to banks, yet additional financial-market restructuring is warranted to neutralize remaining systemic risks. Maintaining fiscal sustainability will become an especially pressing challenge as low oil prices deplete fiscal buffers, and this will necessitate difficult policy choices for the 2016 budget proposal.”

Adverse external conditions will continue to pose a serious challenge to Russia’s short-term growth prospects. Yet, the country’s outlook hinges not only on the evolution of external factors but also on its capacity to reassess priorities and follow through with difficult policy choices. The World Bank’s baseline scenario anticipates contractions of 3.8 percent in 2015 and 0.6 percent in 2016 before the economy recovers to a modest growth rate of 1.5 percent in 2017. Given serious concerns regarding oil-price volatility, this report presents upper-bound and lower-bound oil price scenarios along with the baseline.

“Due to the severity of the projected contraction and the vulnerability of lower-income households to growth shocks, poverty rates are projected to increase sharply,” said Andras Horvai, World Bank Country Director for the Russian Federation. “This will accelerate an already troubling rise in the poverty rate, which climbed from 13.1 percent in the first half of 2014 to 15.1 percent in the first half of 2015. The current recession is expected to reverse recent progress in poverty reduction and threatens shared prosperity achievements of the last decade.”

The report notes, that economic policy should support the transformation of the Russian economy that began in 2014. Policymakers are confronted with complex challenges posed by the short-term adjustment to external changes coupled with major internal long-term shifts in its society and economy. In the short-to-medium term, Russia’s changing external environment will continue to alter the internal structure of its economy. While adapting to relative price changes and the reallocation of productive factors to new sectors is a difficult process, policies that facilitate Russia’s economic transformation could have lasting positive effects.

Facilitating structural change will be especially critical as Russia strives to cope in the long-term with a simultaneous demographic and economic transformation driven by a rapidly aging and shrinking population and by the diminishing relative importance of the natural resource sector.

“Successfully addressing these challenges will require a combination of fiscal discipline, regulatory restraint and institutional capacity building, while resisting pressure to adopt policies that may temporarily mitigate the disruptive effects of the adjustment process at the expense of long-term growth,” said Birgit Hansl. “In the short-term, strong signals indicating the government’s commitment to regulatory discipline and to policies that facilitate the macroeconomic adjustment process would speed up the recovery of private-sector confidence and promote investment despite tight financial conditions.” 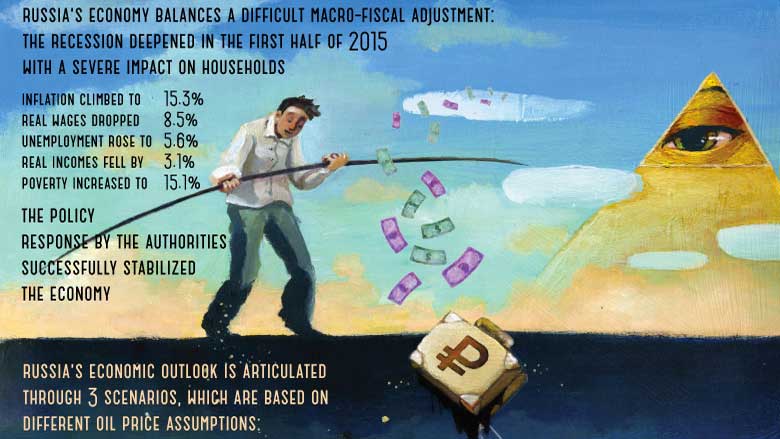