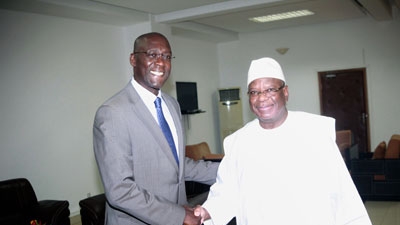 BAMAKO, September 18, 2013 – The World Bank’s Vice President for Africa, Makhtar Diop, was in Mali to celebrate the inauguration of the country’s new President, H. E. Ibrahim Boubacar Keita. The World Bank signed a US $50 million zero-interest IDA* financing agreement with the Malian authorities to help the country further protect the health and economic livelihoods of poor Malians, and boost the country’s economic recovery, after more than 18 months of security and political crisis that took a toll on Mali's 16 million people, especially those directly affected by the conflict in the North. Diop also met with Mali’s new Minister of Finance, the Honorable Bouaré Fily Sissoko, for talks on how the World Bank can further assist Mali with achieving its development priorities.

The new development agreement will support emergency recovery programs in the country’s Sustainable Recovery Plan (PRED), including strengthening social safety net protection for poor and vulnerable families, deepening controls on budget and transparency, and restoring financial sustainability and investment capacity in the power and water irrigation sectors. These activities are part of a broader policy reform agenda being carried out by the Mali Government.

Bouaré Fily Sissoko thanked the World Bank for its continuing development support and said the new World Bank financing came during Mali’s period of most need.

* The World Bank’s International Development Association (IDA), established in 1960, helps the world’s poorest countries by providing loans (called “credits”) and grants for projects and programs that boost economic growth, reduce poverty, and improve poor people’s lives. IDA is one of the largest sources of assistance for the world’s 82 poorest countries, 40 of which are in Africa. Resources from IDA bring positive change for 2.5 billion people living on less than $2 a day. Since 1960, IDA has supported development work in 108 countries. Annual commitments have increased steadily and averaged about $15 billion over the last three years, with about 50 percent of commitments going to Africa.