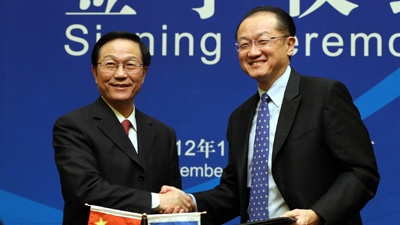 BEIJING, November 27, 2012 – The World Bank Group and China today launched a new knowledge hub to improve development outcomes, aiming to spread practical knowledge from China’s successes in reducing poverty both within China as well as to other countries. Initially, the knowledge hub will help find environmentally friendly solutions to expand urban transport in China’s cities.

“China has lifted 600 million people out of poverty in the last 30 years, and the demand is growing among other developing countries to learn from its remarkable progress,” said World Bank Group President Jim Yong Kim. “The new knowledge hub will play an important role in making China’s lessons available to the world and will further our common mission to end extreme poverty and build shared prosperity.”

"The hub will become a new and open centre for developing countries to learn from each other,” said the Chinese Minister of Finance Xie Xuren.

Under the Memorandum of Understanding (MoU) on the World Bank-China Knowledge Hub for Development signed in Beijing by Kim and the Chinese Minister of Finance Xie Xuren, the first pilot, called TRANS-FORM, will focus on urban transport. This focus was selected because of the urgent need for innovative solutions to deliver green, inclusive, and low-carbon development.

Managing urbanization is a priority for China, with about 75 percent of its gross domestic product generated in the largest 120 cities, and 350 million rural residents expected to move into its cities over the next 20 years. The Bank is helping China introduce transport improvements in about 30 cities, focusing on low-carbon emission options such as public transportation, walking and cycling.

The new knowledge hub will speed up the process of analyzing the successes and lessons learned in implementing solutions to urban challenges. Some innovations are already being transferred to other countries. For example, the Green Freight Initiative, which aims to improve fuel efficiency in Chinese trucks, is being adopted in Brazil. CAI-Asia, one of the Bank's partners in green freight in China, has started a pan-Asian green freight program with support from donors and the private sector.

The knowledge hub will also help Chinese cities learn from each other. An integrated corridor management approach was introduced in an urban transport project in several cities in Liaoning Province to improve people’s travel speed, reliability, safety, and security in a comprehensive manner, based on successful examples in London and New York. It is now making public transport more attractive in other cities including Taiyuan, Wuhan, Changzhi, Xiangyang, and Xining.

While many countries understand broad policy directions, they may not be getting the results they want because delivery of services and infrastructure lags behind, often in communities where the needs are greatest. Recognizing this development challenge, the knowledge hub seeks to lay the foundations for a “science of delivery,” which will collect and distribute practical knowledge that countries can use to get delivery right.

Kim also attended the launch ceremony of a risk-sharing facility between the International Finance Corporation (IFC), which is the member of the World Bank Group focused on private sector development, and Bank of Jiangsu. The project aims to unlock financing for energy efficiency and renewable energy projects in China’s coastal province of Jiangsu.  The guarantee facility comes under IFC’s China Utility-based Energy Efficiency Finance Program (CHUEE), which encourages banks to finance climate-friendly projects.

"IFC plays a critical role in China by promoting economic growth that is both inclusive and sustainable,” said Jin-Yong Cai, IFC Executive Vice President and CEO, at the launch of the facility. “We entice banks to finance climate-friendly projects by sharing some of their financial risk and we connect financial institutions with market expertise to help them better understand the energy efficiency and renewable energy sectors."

The Chinese Assistant Minister of Finance and Alternate Governor to the World Bank Group Zheng Xiaosong praised the program as an important platform to promote public-private partnership for low-carbon development.

During his visit, Bank Group President Kim will also meet state leaders and ministers of the Chinese Government.  In addition, Kim will go to Sichuan Province where he will meet people benefiting from support given by the IFC to a local bank; visit a maternal and child clinic and other facilities built after the 2008 devastating earthquake; and speak with beneficiaries of a rural water and sanitation project.