10 Years of Green Bonds: Creating the Blueprint for Sustainability Across Capital Markets

The phone call to the World Bank Treasury came out of the blue: in late 2007, a group of Swedish pension funds wanted to invest in projects that help the climate, but they did not know how to find these projects. But they knew where to turn and called on the World Bank to help. Less than a year later, the World Bank issued the first green bond—and with it, created a new way to connect financing from investors to climate projects.

Bonds are essentially an agreement where issuers borrow funds from investors and must repay investors at an agreed rate after a specified amount of time. Governments, companies and many others issue bonds to borrow money for projects. Issuing a bond was nothing new for the World Bank—it has been issuing bonds since 1947 to raise financing from the capital markets for its development projects. But the concept of a bond that is dedicated to a specific kind of project had not been tested before.

It formed the basis for the Green Bond Principles coordinated by ICMA, the International Capital Markets Association. It highlighted the social value that bonds could create and the need for a sharper focus on transparency. 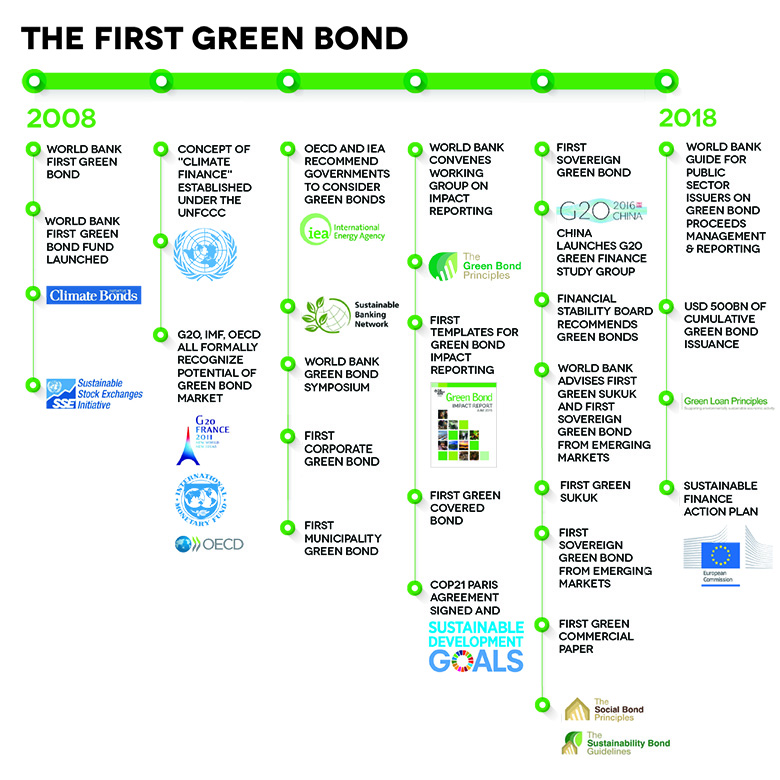 Since then, the World Bank has raised more than US$13 billion through almost 150 green bonds in 20 currencies for institutional and retail investors all over the globe.

At the end of the fiscal year 2018, there were 91 eligible projects and a total of US$15.4 billion in commitments. Of these commitments, US$8.5 billion in Green Bond proceeds were allocated and disbursed to support projects in 28 countries and another US$6.8 billion had yet to be disbursed.

Together, these sectors made up approximately 69 percent of the Green Bond commitments.

The World Bank’s first Green Bond Impact Report is widely recognized by the market as a standard and model for impact reporting. Other green bond issuers now include companies and banks of all sizes and several countries. All issuers are measuring, tracking and reporting on the social and environmental impact of their investments. Fannie Mae is the largest issuer of green bonds by volume in a single year. Fiji last year issued the first emerging market sovereign green bond. Every bank active in the international capital markets has staff dedicated to green or sustainable bond financing. Green lending criteria are being incorporated in loans. There is an industry of second opinion providers and verifiers, including rating firms and others providing information to investors and supporting issuers. And the green bond concept has been expanded to other labels, such as social bond and blue bond.

"Our generation may not be able to solve all the problems related to climate change, but we can do our part to leave a better planet for the next generation." 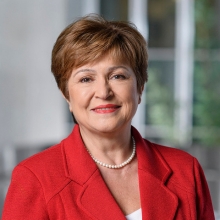 They also highlight the social value of fixed income investments and need for a sharper focus on transparency.

“It comes down to a simple choice: we continue business as usual and hope for the best. Or we act now and build a resilient future. Our generation may not be able to solve all the problems related to climate change, but we can do our part to leave a better planet for the next generation.”

Fast forward ten years. Capital markets have evolved from a market where investors knew and cared little about what their investments were supporting, to one where purpose matters more than ever. As a result, there are now social bonds, blue bonds, and other bonds that raise financing dedicated to a specific development purpose. All follow the green bond model with its focus on impact reporting. More than US$500 billion in these kinds of labeled bonds have been issued since 2008.

“Investors want a competitive investment, but we see that more investors also want to put their money to have a positive and measurable impact on society,” said Heike Reichelt, World Bank Treasury’s Head of Investor Relations and New Products.

This revolution was sparked by green bonds. The bigger picture is to continue the revolution and momentum towards achieving the Sustainable Development Goals (SDGs) by 2030. The structure and reporting for bonds will continue to become more sophisticated, and one day every investor will ask “what’s my impact?” and expect clear and convincing data as the answer.

Event: From Evolution to Revolution: 10 Years of Green Bonds