DRC: A Trip to the Front Lines of the Fight Against Ebola

Health workers put their Personal Protective Equipment on before entering the zone where people suspected of having Ebola are held in quarantine to be monitored and treated at the Ebola Transition Center. © Vincent Tremeau/World Bank

They look like enormous ice cubes. The transparent, 30-foot modules, each weighing a ton, are surrounded by people moving briskly in bright yellow hazmat suits. And at first glance, it’s hard to imagine that, inside these 12 structures a few yards from the general hospital in Beni, a life-and-death battle is being waged.

These are Biosecure Emergency Care Units for Outbreaks (or "cubes," from their French acronym). Costing US$17,000 apiece, they are a key component of Beni’s Ebola Treatment Center (ETC). The bustling men and women are local and international health workers who have been mobilized over the past six months to combat DRC’s latest Ebola outbreak and help save lives. Their yellow garb is Personal Protective Equipment, which must be burned after each use.

Masika Lubaho and her husband Katsuva Mukuro have put on their best outfits to visit their 15-year-old daughter, Julie, who’s being treated in one of the cubes. "She has been sick for three weeks. At first, we didn’t want to take her to the hospital because of everything we’d heard about Ebola," Masika says.

"But in our village, one of our neighbors had a daughter who had Ebola, too, and she was cured. Here at the treatment center, they don’t charge you money. They let me talk to her when I come see her," she added. "Before, I was afraid to come here, but now the doctors are taking care of her. I have faith that she’ll get better." 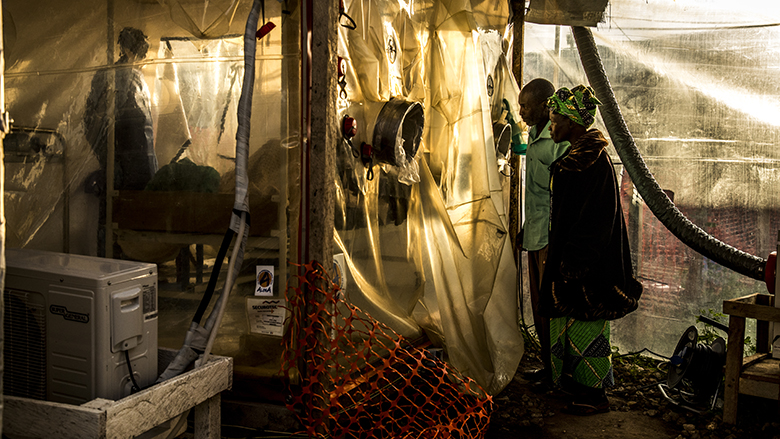 Masika Lubaho and her husband, Katsuva Mukuro, come to the Ebola Treatment Center to visit their daughter Julie (15), who is suspected of being infected by Ebola. © Vincent Tremeau/World Bank

Deployed in record time last August by the organization ALIMA (Alliance for International Medical Action), the mobile units with transparent walls are an innovation in the fight against Ebola. "The plastic sleeves attached to the chamber walls allow workers to administer some of their care without entering the cube. They also allow families to see and communicate with patients without risk of contamination," explains Jacques Étienne, head of ALIMA’s Ebola treatment center.

"The cubes’ transparency and the fact that families were invited to visit patients and those with suspected cases, allayed people’s doubts," said Dr. Junior Ikomo, an ETC physician. "Before, the sick were in quarantine, cut off from their families. The cubes allow communication between the patient and the family."

Women and children are often the first victims

A young woman named Kasomo knows this all too well. Not long ago, she was also confined in a cube after losing her nine-year-old son to Ebola. "He died at the hospital while we were filling out the admission form. We brought his body back home…that’s how I got the virus, too," she says, as she rocks a young baby in her arms. Kasomo was diagnosed in time and brought to the Ebola treatment center in Beni. And she survived. 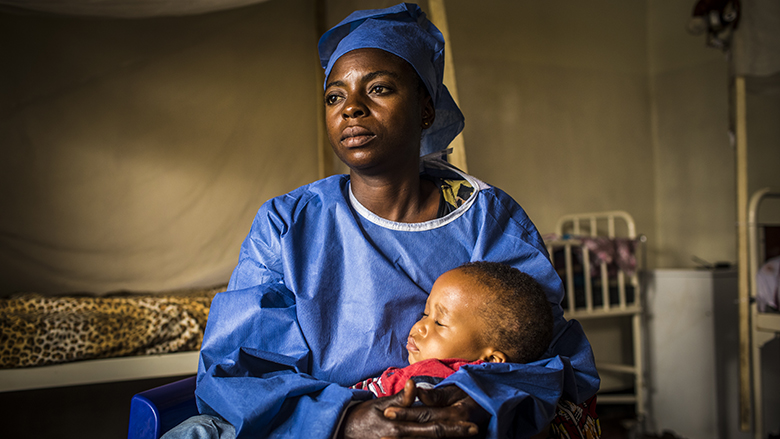 Today, Kasomo works as a "berceuse" —a hands-on caregiver—at the child care center set up by ALIMA (with support from UNICEF and the Danish Refugee Council) a few yards from the Ebola Treatment Center. Its mission is to care for children whose mothers have the illness: feed them, hold them, rock them, make them laugh – while their mothers are recovering. It’s a task Kasomo takes to heart. As a survivor of Ebola, she has immunity to the disease, letting her contribute in an invaluable way to the fight against the epidemic. "We love the children here at the center, we consider them our own," said Kasomo. "When my child died, I had to burn his belongings, his clothes … but I kept photos of him and his report cards." 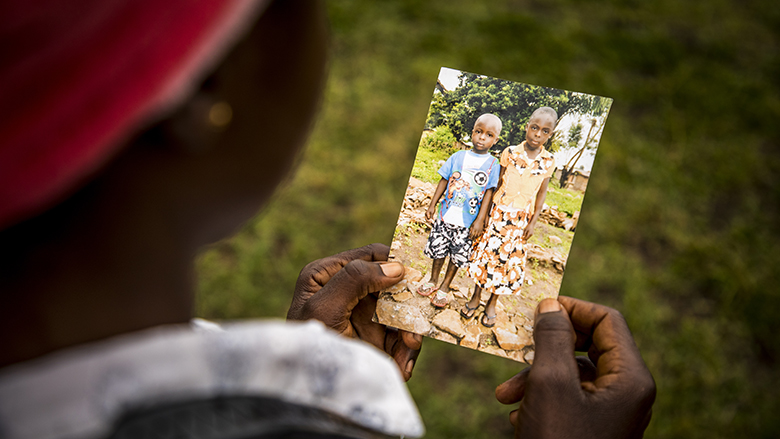 Kavira Kasombo holds a photo of her child who died from Ebola. © Vincent Tremeau/World Bank

I think of him a lot— he’s my son, I gave birth to him—I can’t forget him, Kosomo added. "I can't let go of these mementoes. They're what help me to remember my son. Throw them away? What else can bring me close to my son?"

The city of Beni is in a region embroiled in conflict — It all further fuels frustration. 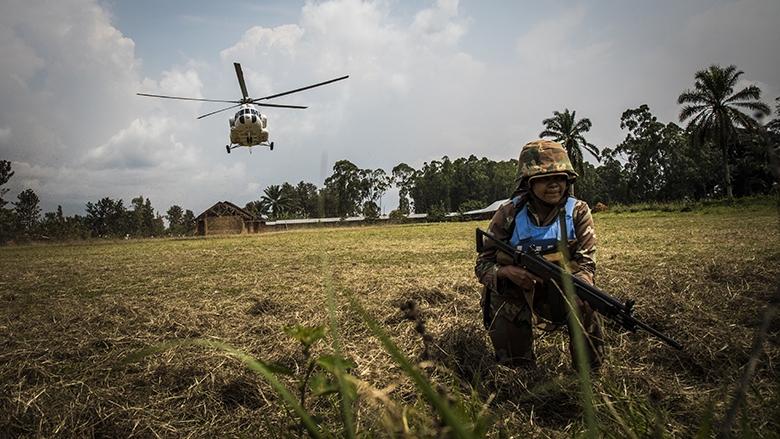 In this context, the medical teams faced resistance from the communities they were trying to serve, where distrust of institutions sometimes hampered the humanitarian workers’ efforts. The situation worsened in late December, when residents of Beni and Butembo in eastern DRC, the two main epicenters of the epidemic, saw their participation in the presidential elections cancelled because of Ebola. More recently, following attacks on its Ebola treatment centers in the towns of Butembo and Katwa, now the epicenters of the epidemic in North Kivu, Médecins sans Frontieres (MSF) was forced to suspend its activities.

International partners believe they got involved too slowly in West Africa in 2014-2015, when Ebola caused more than 11,000 deaths in Guinea, Liberia, and Sierra Leone. By contrast, at the first signs of an outbreak last spring in DRC’s Equateur province, the government’s response plan was fully funded in just two days. Alongside the DRC government, donors included the World Bank Group through the International Development Assocation (IDA) financing and the first financial commitment from the Pandemic Emergency Financing Facility (PEF).

to support the response. The government and partners meet three times a day in a prefab building that serves as a headquarters. They share updates on new cases, bring figures up to date, and assess the progress of the joint response. 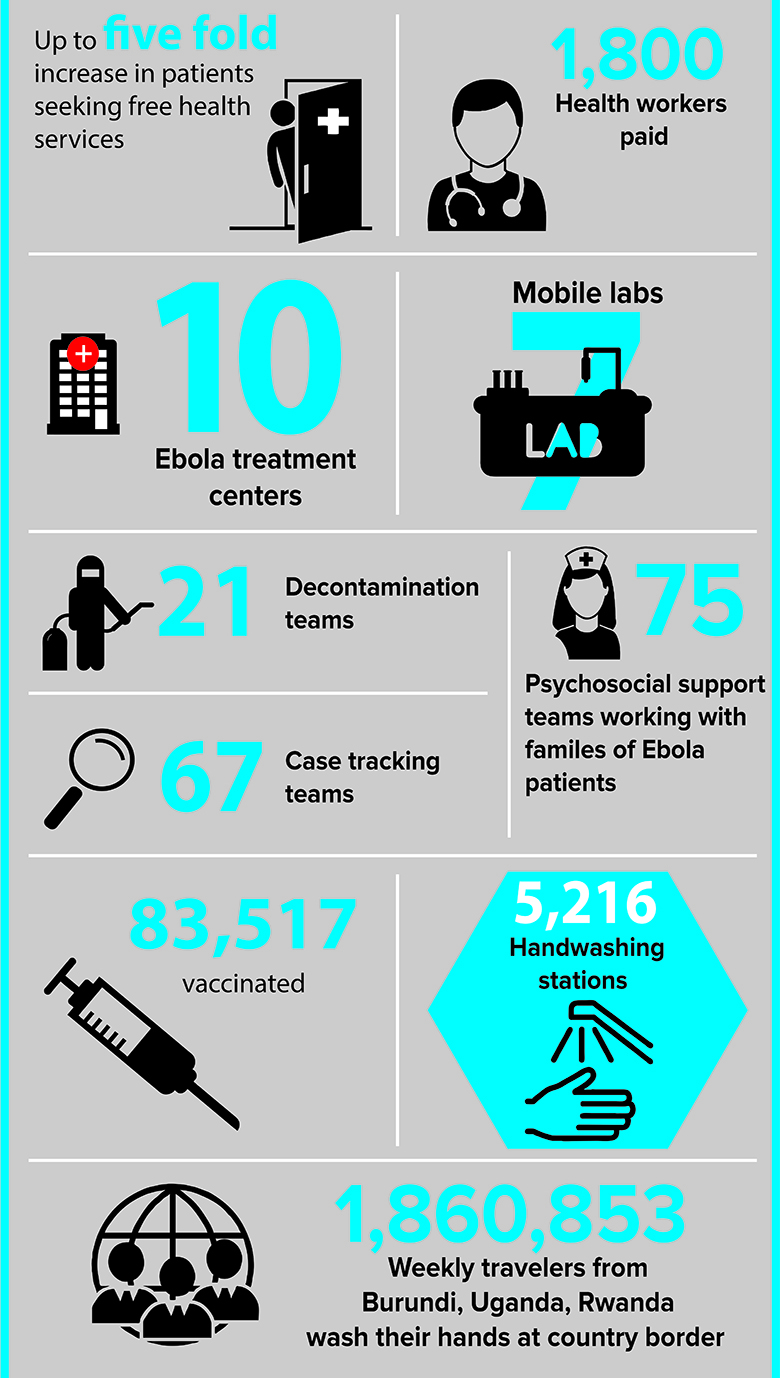 , so that health workers can focus on saving lives instead of on raising money. The DRC government and international partners are now escalating the effort from February through July 2019, and the World Bank has just announced IDA support totaling $60 million. In addition, the PEF has also made available up to $20 million. Together, this $80 million will cover more than half the projected cost of the six-month escalated response, with other donors expected to contribute the rest.

"If the financial resources exist, it’s because the World Bank and the government of Congo spared no expense in helping conquer this epidemic," says Dr. Aruna Abedi, the Health Ministry’s coordinator for the Ebola response.

According to Michel Muvudi, the World Bank Group’s senior health specialist in DRC, In isolated regions, where just one in five people has access to health care, ensuring free treatment is essential to accessing health care and combating a disease like Ebola, where early detection and treatment are critical.

"In the fight against Ebola, we tend to overmedicalize our response and put faith in our financial, logistical, and technical capabilities above all else. ," says Muvudi.

, supporting the Health Ministry in confronting the challenges of Ebola. Abdou Salam Gueye, WHO’s on-site operations coordinator, sums up the situation: "Our role is to make sure the necessary resources are where they’re needed, at the time they’re needed." He adds, "If there is hope to be found in this epidemic, it’s that there’s an experimental vaccine for the first time" (the rVSV-ZEBOV vaccine, produced by the pharmaceutical company Merck and financed by GAVI).

So far, over 80,000 people have been vaccinated, including health workers, who are often among the earliest victims. According to Dr. Aruna Abedi, the Health Ministry’s coordinator for the Ebola response, better response protocols and the use of vaccines are two innovations allowing responders to make progress. But Dr. Abedi also urges the international community to keep up the fight until the outbreak is contained. 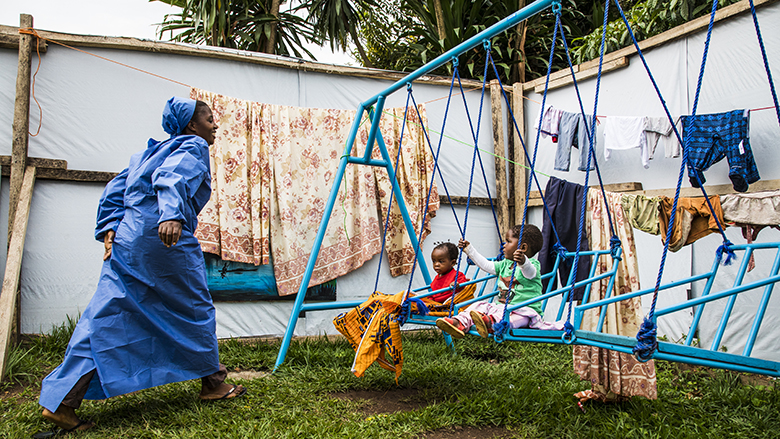 A caregiver plays with children at a UNICEF-managed child care at the Ebola Treatment Center. © Vincent Tremeau/World Bank

Back at the day care center, Kasomo has a message for the international community and the doctors who cured her. "I thank everyone who is working against Ebola. Without them, we would all be dead," she says. "I hope they will continue to provide medicines to us."

The cooing voices of her tiny charges remind her that life goes on.

Press Release: Ebola Escalated Response: US$80 Million Commitment to the Democratic Republic of the Congo

Factsheet: The World Bank Support to the 10th Ebola Outbreak in Democratic Republic of Congo

‘We Will Conquer Ebola!’: Voices and Faces of the Battle Against the Ebola Epidemic in the DRC