Fact Sheet: The World Bank Support to the 10th Ebola Outbreak in Democratic Republic of Congo 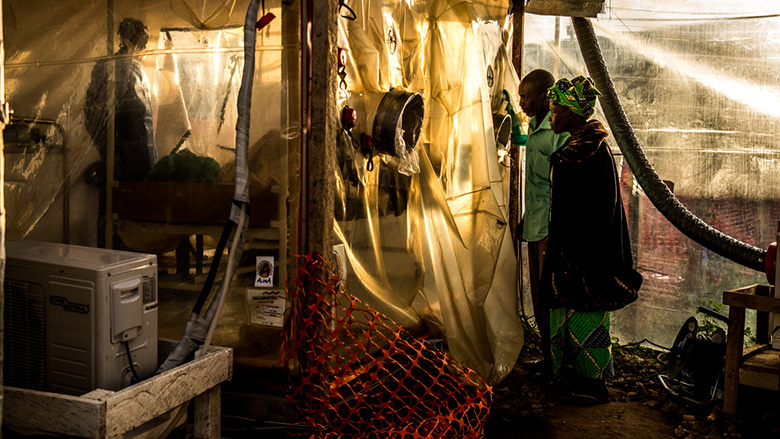 Family members wait and watch from outside a transparent tent being used to treat Ebola patients, the Democratic Republic of the Congo (DRC) - Vincent Tremeau / World Bank 2019

Since August 1, 2018, the Democratic Republic of Congo (DRC) is fighting a severe Ebola outbreak –the 10th such outbreak the country is facing since 1976. The World Bank has been a leading supporter of the efforts to combat DRC’s ongoing battle with Ebola, with resources going to the frontline response, health system strengthening, and preparedness to reduce the risk of spread.

Ebola has spread across communities already beset by the severe hardships of extreme poverty and insecurity.  In addition to the support and financing mobilized to respond to the current Ebola crisis, the World Bank’s long-term engagement in DRC is focused on investing in people, supporting communities, strengthening services and systems.  All of these are critical steps to stamping out this crisis---and to tackle the underlying sources of poverty and inequity that have helped fuel this deadly outbreak.

On July 24, 2019, the World Bank Group announced that it is mobilizing up to US$300 million to scale up support for the global response to the Ebola epidemic in the DRC. This announcement follows the declaration by the World Health Organization (WHO) that the current outbreak constitutes a Public Health Emergency of International Concern.

·       The US$300 million will be largely financed through the World Bank’s International Development Association (IDA) and its Crisis Response Window, which is designed to help countries respond to severe crises and return to their long-term development paths. At least 70 percent of this amount will be in the form of grants and the remainder in credits.

·       The financing package will cover the Ebola-affected health zones in DRC and enable the government, WHO, UNICEF, WFP, IOM and other responders to step up the frontline health response, deliver cash-for-work programs to support the local economy, strengthen resilience in the affected communities, and contain the spread of this deadly virus.

·       This amount is approximately half of the anticipated financing needs of the Fourth Strategic Response Plan (SRP4), which is expected to be finalized by the Government and the international consortium of partners working on the response in July 2019.

Prior to this announcement, an additional $100 million has been disbursed by the World Bank’s International Development Association (IDA) and the cash window of the Pandemic Emergency Financing Facility (PEF), an innovative financing mechanism set up specifically to combat pandemics. Specifically:

o   IDA:   $80 million has been disbursed from IDA contingency mechanisms.

·         The World Bank supports health clinics in all affected areas with free healthcare and provision of essential medicines.  This has removed financial barriers for patients needing to access healthcare and has resulted in a three to five-fold increase in the number of patients seeking care, making detection of Ebola easier.

·         Sixty percent of all frontline health workers in Ebola-affected areas – which is 1,800 workers —are supported with hazard pay.

·         5,216 handwashing stations have been set up to ensure hygiene and limit transmission.

·         Community engagement campaigns have helped increase knowledge on how to limit Ebola transmission, build community support and ensure that new cases are reported immediately and treated.

·         Over 80,000 people have been vaccinated through an innovative coordinated response supported by many partners, including GAVI.

·         The current Ebola response builds on several years of World Bank and partner engagement to help build DRC’s health system, enabling the country to take a leadership role in the Ebola response.

·         World Bank technical experts have helped develop the Ebola Strategic Response Plans put together jointly by the government and international partners to combat the outbreak.

·         The Center of Excellence for Ebola (CEE) is being established, which would be the foundation of a national public health institution for DRC and could play a regional role in the context of Ebola outbreaks.

The World Bank has developing a preparedness plan that includes contingency financing mechanisms to make resources available rapidly, if the outbreak were to spill over the border into one of the nine neighboring countries.