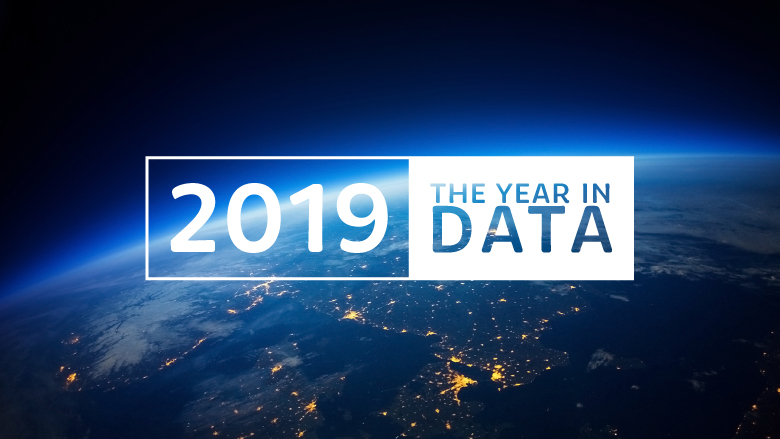 By: Donna Barne and Divyanshi Wadhwa

As this decade comes to an end, the world has seen progress on many fronts. The poorest countries have greater access to water, electricity, and sanitation (i.e., a toilet). Poverty and child mortality have fallen. Technology has spread far and wide so that there are now more mobile phones than people. But we’ve also broken some of the wrong kinds of records. In 2019, more people were forcibly displaced than any other time in history. Carbon dioxide in the atmosphere hit an all-time high and biodiversity is declining at an accelerating rate. These charts highlight some remarkable achievements and the serious challenges that remain as we head into 2020.

More than a third of the world lived in extreme poverty 30 years ago. Today, less than 10% of people live on $1.90 a day or less. , according to a new analysis of World Bank poverty data. These 15 countries had the highest poverty reduction rates among 114 countries with comparable data. Seven were in Sub-Saharan Africa. Two of the African countries were also classified as fragile, lending hope that reducing poverty is possible even in the most challenging conditions.

2. 85% of the world’s poor live in South Asia and Sub-Saharan Africa

: India, Nigeria, Democratic Republic of Congo, Ethiopia, and Bangladesh, according to the most recent comprehensive data available. To reduce extreme poverty globally, it’s therefore crucial to accelerate progress in these five countries and throughout South Asia and Sub-Saharan Africa, home to 85% (629 million) of the world’s extreme poor.

3. Climate change took to the streets

Millions of people in over 150 countries around the world took to the streets demanding urgent action on climate change in September, ahead of the United Nations Climate Action Summit in New York. An estimated half a million people marched in Madrid, during the United Nations Climate Change Conference (COP25), to demand urgent climate action. Meanwhile, protests also erupted in many parts of the world in response to changes in prices of basic commodities, like energy, transport, and food.

: boosting low-carbon development, reflecting the “polluter pays” principle, and ensuring costs and benefits are distributed equitably without penalizing vulnerable groups. Over half of countries (96 of 195) have indicated that they are planning or considering the use of carbon pricing to meet their national climate targets (or NDCs). Currently, 57 carbon pricing initiatives covering 20% of global greenhouse gas emissions are in place or are scheduled for implementation. As part of designing and implementing these successfully, it will be key to assess how best to use the revenues – about $45 billion in 2018 – for instance, helping achieve a just transition, reducing labor income tax, and boosting spending on critical public priorities.

Over the last decade, the number of people living without electricity has fallen from 1.2 billion in 2010, to 840 million in 2017, according to the 2019 Tracking SDG7 Report. , with Bangladesh, Kenya, and Myanmar making the most progress among the 20 countries in the world with the biggest electricity-access deficits.

Many people still without electricity live in rural areas and in Sub-Saharan Africa, where 573 million people lack access. Off-grid power, such as mini-grids and solar home systems, are among the solutions to connect the poorest and hardest to reach households. About 120 million people worldwide have access to basic electricity through solar lights. Some 47 million people are connected to mini-grids, which are off-grid, small-scale electricity generation and distribution systems. To ramp up large-scale modern renewable energy, an international partnership convened by the World Bank is working to expand energy storage – critical to integrate solar, wind, and other renewables into electricity grids. The program aims to finance 17.5 gigawatt hours (GWh) of battery storage by 2025 – more than triple the 4-5 GWh currently installed in all developing countries.

5. A million species are threatened with extinction

Biodiversity is declining faster than at any time in human history. , according to a global assessment by the Intergovernmental Science-Policy Platform on Biodiversity and Ecosystem Services. Today, the extinction rate is tens of hundreds of times higher than over the past 10 million years and this loss is mostly driven by human activities including:  changes in land and sea use; direct exploitation of organisms; climate change; pollution; and invasive alien species. Biodiversity underpins many ecological services to humans, and its loss affects people’s livelihoods, water supply, food security, and resilience to extreme weather events. Without action to conserve and more sustainably use nature, global goals related to poverty, hunger, health, water, cities, climate, oceans, and land are at risk.

6. A quarter of children under 5 have not had their births registered

Registering a child at birth helps ensure they have a legal identity and can access health care, education, social services, and jobs later in life. , and 237 million children under 5 do not have a birth certificate. A statistical analysis reveals that unregistered children come from the poorest households, live in rural areas, and have mothers with no or little formal education. Globally, children living in urban areas are around 30% more likely to be registered than children in rural areas.

The good news is there has been progress over the last 20 years – and especially over the last decade. The share of children under 5 whose births are registered has gone up from 6 in 10 around 2000, to 3 in 4 today. Without this progress, the number of unregistered children would have reached 266 million. But unless progress is accelerated further, the total number of unregistered children in Sub-Saharan Africa will continue to increase and will exceed 100 million by 2030, says UNICEF.

– a problem that could threaten countries’ efforts to build skills and know-how needed for the jobs of the future. To spotlight this issue, the World Bank created a “learning poverty” indicator measuring the percentage of children who cannot read and understand a simple text by age 10. New data show that 53% of all children in low- and middle-income countries and  89% of children in poor countries suffer from learning poverty.  At the current rate of progress on literacy, 43% of children in low- and middle-income countries will still be learning poor by 2030. To accelerate progress, the World Bank set a target to halve “learning poverty” by 2030. This goal is achievable if all countries can manage to improve learning as well as several countries that made rapid improvements between 2000 and 2015 – which means on average nearly tripling the global rate of progress.

8. Today’s jobs increasingly are in the service sector

Where will the jobs be in the future? Current trends point toward the service sector, which became the world’s largest employer in the early 2000s and now accounts for 49% of global employment.  The share of people employed in services ranges from 26% of the workforce in low-income countries to 75% in high-income countries, according to International Labour Organization data.  Jobs in market (private sector) services have doubled in upper middle-income countries since 1997.  Wholesale and retail trade and repair is projected to drive overall employment expansion in developing countries from 2017 to 2025, while jobs in real estate and business services are expected to grow in both middle-income and developed countries.  Jobs related to accommodation and food services will expand to varying degrees everywhere, according to the ILO.

9. Debt has risen rapidly in emerging markets and developing economics since 2010

The first three ended with financial crises in many emerging and developing economies. The latest debt wave, since 2010, has already witnessed the largest, fastest and most broad-based increase in debt in these economies, according to the Global Waves of Debt report. Their total debt has risen by 54 percentage points of GDP to a historic peak of almost 170 percent of GDP in 2018. Current low interest rates reduce some of the risks associated with high debt. However, emerging and developing economies also face weak growth prospects, mounting vulnerabilities, and elevated global risks. A menu of policy options is available to reduce the likelihood of the current debt wave ending in crisis and, if crises were to take place, alleviate their impact.

10. Refugee numbers are at record levels

The number of displaced people in the world rose to 70.8 million in 2018, including a record 25.9 million refugees, 41.3 million internally displaced people, and 3.5 million asylum seekers. The number of people seeking international protection outside of their country of origin has increased 70% since 2011. About 85% of refugees are hosted by developing countries.  In 2018, 67% of refugees came from 5 countries: Syrian Arab Republic, Afghanistan, South Sudan, Myanmar, and Somalia. And more than 4.6 million people left Venezuela between 2016 and November 2019,  primarily for Colombia, Peru, and Ecuador. , including dedicated financing for refugees and host countries, to more than $20 billion and is working with the United Nations to respond to protracted crisis and post-crisis situations.

11. Money sent home by workers is an increasingly important part of the global economy

Remittances, as this money is called, is expected to reach $551 billion in low- and middle-income countries in 2019, up by 4.7% compared to 2018. Remittances have exceeded official aid – by a factor of three – since the mid-1990s. This year, they are on track to overtake foreign direct investment (FDI) into low- and middle-income countries. Remittances equal or surpass 25% of GDP in five countries: Tonga, Kyrgyz Republic, Tajikistan, Haiti, and Nepal.

The digital revolution has reached every corner of the globe in just a few decades. Today, more households in developing countries own a mobile phone than have access to electricity or improved sanitation. Digital platforms have brought unprecedented access to information and enabled mobile banking and other businesses to emerge. They have also helped spur “global value chains” that produce goods and services around the world, and in the process have boosted the GDP of many developing countries. Access to fixed broadband is lowest in Sub-Saharan Africa, where 31% of the population has access. The new “Connecting Africa Through Broadband” strategy aims to double connectivity by 2021 and help the continent reach universal access by 2030.

Reported measles cases worldwide rose 300% as of November 5, 2019, compared with the same period last year, with several countries experiencing outbreaks, according to World Health Organization preliminary data. As of November 5, 2019, there were 413,308 reported cases globally, plus an additional 250,000 reported cases in Democratic Republic of Congo, versus 333,445 for all of 2018. In December 2019, the World Bank responded to a growing measles outbreak in Samoa, with $3.5 million to support the country’s emergency response. This was on top of a $9.3 million grant to strengthen health systems in Samoa, where measles immunization coverage plummeted from 58% in 2017 to just 31% in 2018.

Globally, immunization against measles among children ages 12-23 months rose from 70% in 1993 to 86% in 2018. Nevertheless, 169 million children worldwide missed out on the first dose of the measles vaccine between 2010 and 2017, or 21.1 million children a year on average. In 2018, the most affected countries were DRC, Liberia, Madagascar, Somalia, and Ukraine, and an estimated 140,000 people died, according to WHO.

14. The world’s poorest countries made progress over the last 20 years

The last two decades have seen significant progress in many of the world's poorest countries. The extreme poverty rate fell from more than 50% to about 30%. Child mortality declined from nearly 14% to 7%. Access to electricity increased by 57% and the share of people using at least basic drinking water and sanitation services increased by 22% and 41%, respectively, among other results.

Since 1960, IDA has provided more than $391 billion for investments in 113 countries. In the most recent replenishment of the fund on December 13, 2019, the global community committed $82 billion to help the 76 poorest countries invest in the needs of their people, boost economic growth, and bolster resilience to climate shocks and natural disasters.