Venezuelan Migration: The 4,500-Kilometer Gap Between Desperation and Opportunity 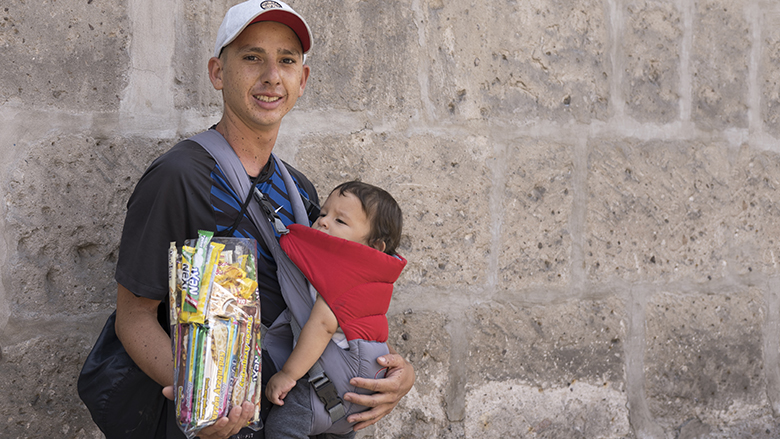 A Venezuelan migrant selling candy in the streets of Lima (Peru)

Venezuelan migration is not abating. Since 2016, more than 4.6 million people have fled the country, mostly to other Latin American countries like Peru. How can these recipient communities not just deal with the influx but take advantage of the potential?

How many kilometers are you prepared to walk to flee hunger? For Venezuelans, no distance is too great to escape their country’s economic and social collapse.

Latin America has a long history of migration, but today an unprecedented exodus is unfolding. Between 2016 and November 2019, more than 4.6 million men, women, and children have left Venezuela in search of a better future, according to data from the United Nations High Commissioner for Refugees (UNHCR).

Venezuelan migration is the largest human mobilization in the region’s recent history. Migrants are fleeing a humanitarian and economic crisis that has exacerbated a decline in public safety and living standards. 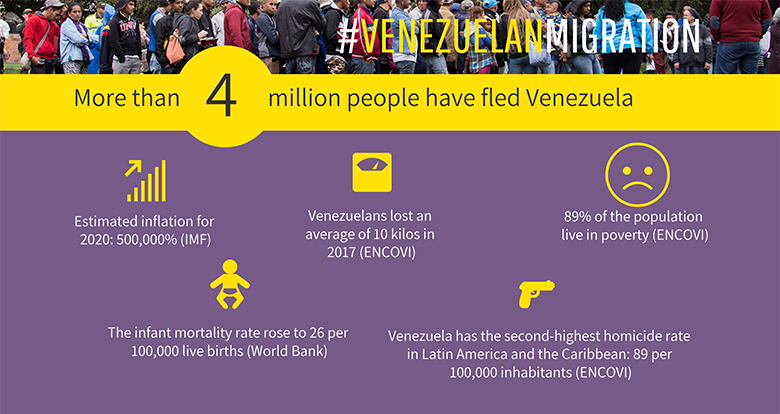 According to the UNHCR, between 4,000 and 5,000 Venezuelans leave the country every day. Most of them travel on foot without really knowing where they will wind up, but they go anyway with the hope of a better future for their families. This exodus is changing the face of Latin America and the Caribbean forever.

Colombia, Peru, and Ecuador are the main destinations for these migrants. 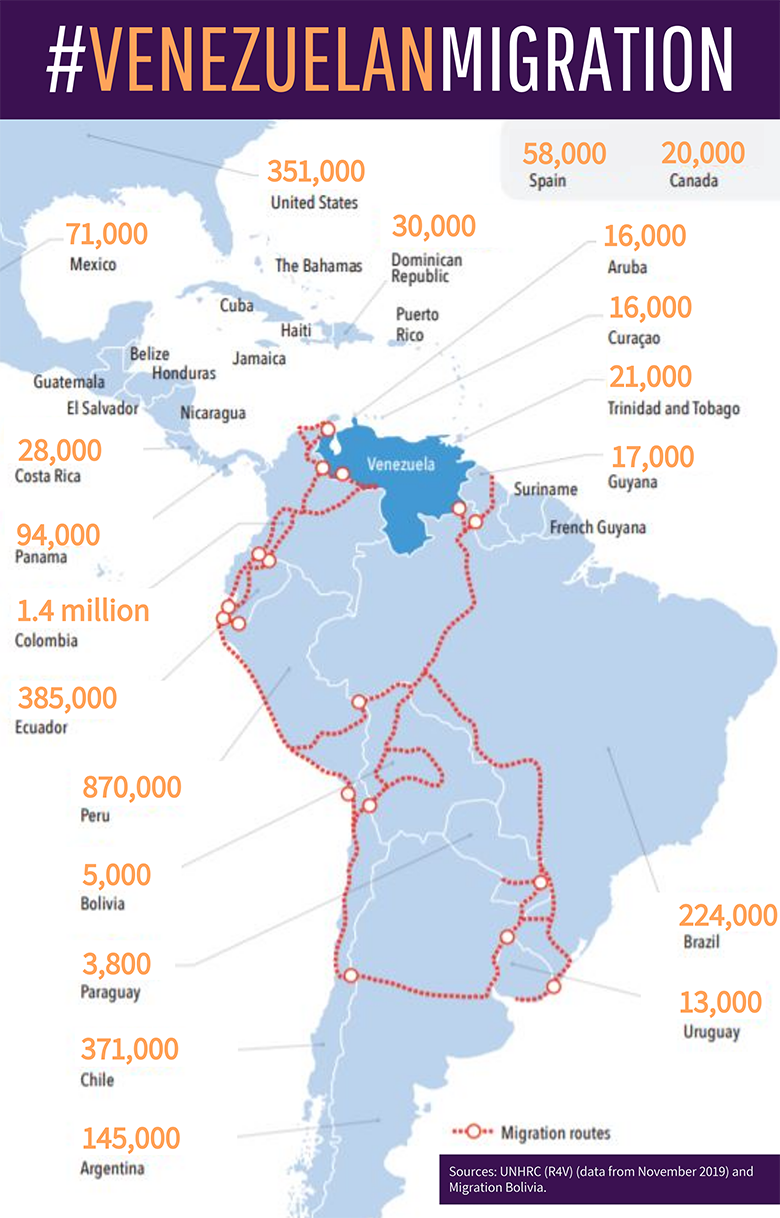 Historically, LAC has had large migration flows, especially during the first half of the twentieth century. Italians and Spaniards moved to Argentina, Japanese to Brazil, and Chinese to Peru. Since the 1960s, the migration wave has grown within the region and to the United States, especially from Central America.

Venezuela’s migration crisis is different because its sheer magnitude is exerting enormous pressure on recipient countries, particularly in education, employment, and health.

It has become so critical that 11 countries in the region have increased their entry requirements for Venezuelan migrants and refugees. This has not stemmed the influx, however. It has only affected its legality.

One of these countries is Peru. A total of 870,000 Venezuelan migrants have traveled 4,500 kilometers to reach that country, and more are expected to come. According to a new World Bank report (Spanish), successfully addressing the influx begins with integrating the migrants and harnessing their potential to drive new growth opportunities.

It won’t be easy. Myths exist with respect to Venezuelans in Peru, engendering xenophobia and hindering their inclusion: “If we close the borders no more will come”; “All the Venezuelans in my country are criminals”; “My country can’t take in so many people”; “Venezuelans are taking away our jobs.”

According to the WB study “negative attitudes toward the Venezuelan population are more prevalent in Peru than in other recipient countries, and they are likely to increase.”

The study, part of a series on Venezuelan migration in Latin America and the Caribbean, also found that the Venezuelan population in Peru is mainly young – 42% are between the ages of 18 and 29 – and most of them come from urban areas. Most are families as well, including 117,000 children. The migrants are also highly qualified: 57% of working-age Venezuelans in Peru have higher education, and of these, half have a university degree.

How can this potential be put to use? If these migrants are incorporated into Peru’s formal labor market, estimates suggest that labor productivity could increase by 3.2%. Even when Venezuelan migrants are in the informal sector – half of them work in services – and receive lower wages than local workers, they can generate tax revenue of some 2.25 billion soles (about US$670 million) per year thanks to the increase in aggregate demand and tax collection. That is equivalent to more than 12 percent of the government’s budget for the health sector in 2019.

This is hard cash that the migrants can use to purchase goods and services in Peru, contributing to the economy’s growth. 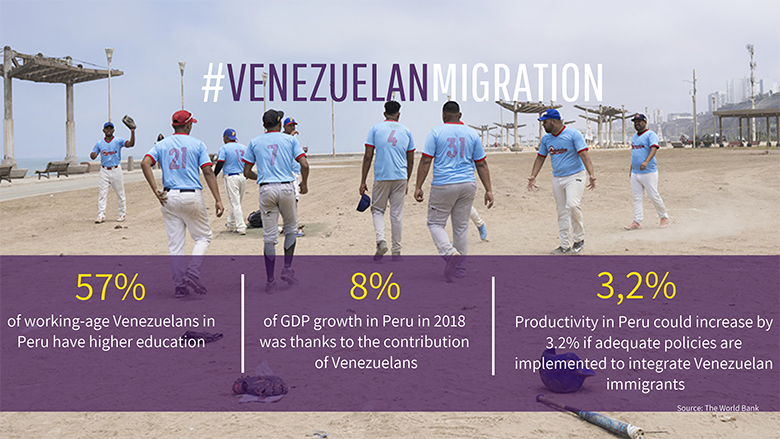 What jobs do Venezuelans have in Peru?

“Good morning, hija. How did you sleep?” That’s what Paola Soto’s father asks her every morning by WhatsApp – from three countries away. A year and a half ago, this surgeon fled her native Venezuela and with a lot of determination managed to join the Peruvian labor market.

The clinic where she works is staffed by people of different nationalities. She works with Cuban physicians, Peruvian nurses, and Colombian health professionals. And while her relationship with her family is only online now, Paola’s education and professional experience is put to the service of the patients she sees today.

(activate CC for subtitles in English)

Discover the stories of other Venezuelans in Peru (in Spanish): Mechanic by day, salsa teacher at night | “Budare”, a mixture of Latin culture.

To take advantage of the benefits of migration, such as Paola’s education and experience, the integration between Peruvians and Venezuelans must be a priority on the public policy agenda.

The World Bank report urges Peru to design and implement a multisector response that includes:

The exodus is inevitable. Never before have so many people left a country in such a short time, but despite this Latin America can transform this crisis into an opportunity.