Transforming Tanzania’s Msimbazi River from a Liability into an Opportunity 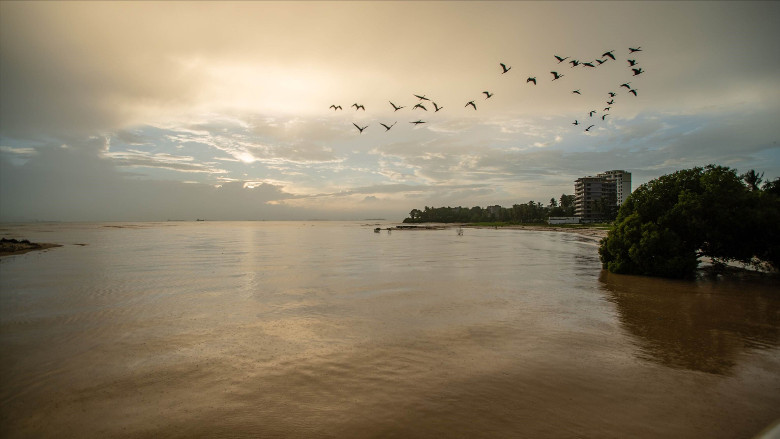 DAR ES SALAAM, August 12, 2019 – The Msimbazi Valley is a vast greenspace in the center of Dar es Salaam – Tanzania’s commercial hub city that houses 27% of the city’s population. Historically, the river served as an important water source, and the fertile floodplain provided prime land for agriculture and animal grazing.

However, with time and a changing climate, the once perennial riverbed has become seasonal. For much of the year, the river is almost completely dry. Then the rain comes and the river changes in character dramatically, causing flash floods to occur along the river and its many tributaries. These have often resulted in several fatalities each year, along with the destruction of critical infrastructure supporting the city.

To pragmatically address the recurrent flood risk in Dar es Salaam, a participatory design process, known as a ‘Charrette’, was undertaken from January to August 2018 involving the dedicated efforts of more than 200 people from 59 institutions and communities across 30 working sessions. Led by the President’s Office Ministry of Regional Administration and Local Government (PO-RALG) with support from the World Bank’s UKAID funded Tanzania Urban Resilience Program, this process has yielded The Msimbazi Opportunity Plan – a comprehensive blueprint for transforming the basin from a hazardous liability into a beacon of urban resilience.

The Msimbazi Opportunity Plan envisages four strategies to redesign the Msimbazi: mitigate, protect, transform and govern. The mitigate strategy aims to reduce the flood hazard itself, while the protect strategy aims to reduce the people, properties and vital infrastructure that are exposed to the flood hazard. Under the transform strategy, the goal is to convert the most flood-prone areas of the valley into a City Park and redevelop surrounding neighborhoods. The govern strategy aims to nurture a planned and coordinated process for urban development and ecosystem restoration in the Msimbazi Basin, and thus stop the current uncontrolled urbanization process that results in increased flooding.

To better understand the flood hazard affecting the basin, flash floods were simulated through a flood model by considering bursts of rainfall over a relatively short period of time. Based on the results – which showed in detail how the Msimbazi basin is impacted by flooding and how this will affect the area over time – three priority design principles are identified within the Msimbazi Opportunity Plan for initial implementation:

River: Focus on conveyance to drain river water from the basin to the ocean as quickly as possible

Terraces: Create elevated terraces to guide the water and create higher edges to protect against flooding

Detailed Areas: Create a city park with functional uses of the terraces and the flood plains

Based on the Urban Development guidelines designed for the project, the urban regeneration potential across 57 hectares of land could provide over 14,500 real estate units across a range of typologies, sizes and places.

By combining comprehensive drainage improvements with commercial development, the Detailed Plan for the Lower Basin would establish a framework that coordinates investments from various sources, including government, private sector, and development partners to restore the highly-vulnerable flood plain and turn this area into a valuable city asset.

Preliminary analysis leads to a projected estimate of about USD 900 million in potential revenues in housing development – only one portion of expected economic benefits. Based on projected cash flows from different economic activities within the valley, cost recovery on capital expenditure would be reached over a period of 12 years and at an expected Internal Rate of Return of 18%.

With this comprehensive plan in place – the Government of Tanzania is now taking steps to move from planning to action. Through additional support from the World Bank’s City Resilience Program, the project is now advancing to undertake a commercial and market review, financial analysis, and regulatory and transaction structuring assessment which will collectively further guide the project’s implementation.