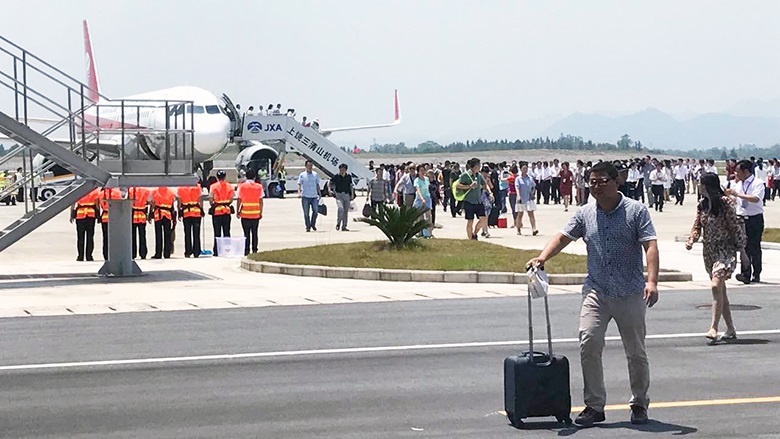 The Sanqingshan Airport in Shangrao, Jiangxi Province, officially opened on May 28. A flight from Chengdu City, operated by Sichuan Airline, was the first to land on the airport. The ceremony was hosted by Party Secretary of Shangrao Municipality, Ma Chengzu, and joined by representatives from the World Bank, Civil Aviation Administration of China, Jiangxi Provincial Government, Sichuan Airline, Shandong Airline, and China United Airline, among others.

The Chengdu-Shangrao route is the first in operation between the two cities. Soon, it will be connected with airports in Beijing, Shenzhen, Qingdao, Foshan and other cities. Shandong Airline and China United Airline are preparing for operations on these routes.

The airport will greatly improve air connectivity between northeastern Jiangxi Province and other parts of China, handling about 750,000 passengers by 2025. Local economy will benefit from improved airline connections, especially by tapping into the rich tourism resources in Shangrao--Mount Sanqingshan National Park in Shangrao is on UNESCO’s world heritage list, while Wuyuan, with its picturesque villages, is one of China’s top tourist destinations.

" Sanqingshan Airport will give wings to economic and social development in Shangrao.  "

The Jiangxi Shangrao Sanqingshan Airport Project was supported by a $50 million loan from the World Bank and $55 million financing from the government. It is the first airport project that the World Bank has supported in China. A “green airport”, the terminal’s design complies with China’s green building standards, incorporating energy-efficient features such as natural ventilation, natural daylight illumination and roof overhangs for solar shading. The airport is also equipped with geothermal heating and cooling systems, which reduce energy consumption for heating by 40%, and for cooling by 30%. Wastewater and storm water are collected separately, and treated for irrigation and reuse. Fixed electrical ground power and preconditioned air units are installed to provide on-board power supply and ventilation when passengers are boarding.

“The project has at least two important aspects. The first is the development of air transport connectivity, which reduces the travel time to or from Shangrao substantially, and brings more growth opportunities for Shangrao. The second is the adoption of the green airport concept during the designing, construction and operation, which demonstrates sustainable airport development in China,” said Binyam Reja, World Bank’s Practice Manager of Transport & ICT GP for Central Asia, China and Mongolia.

According to the 13th Five-Year Plan for China’s Civil Aviation Development, over 50 new airports will be built in the next five years. The World Bank is working closely with the Shangrao Municipality to capture project experiences and lessons learned during the design, construction and operation of the green airport, which will be shared with other municipalities that have plans to develop airports with help from the Civil Aviation Administration of China.