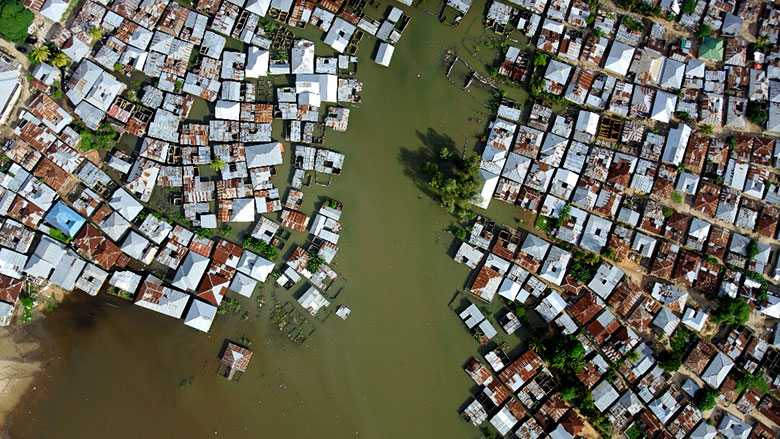 DAR-ES-SALAAM, May 31, 2017 - “There is no such thing as an entirely ‘natural’ disaster:” this is the rallying cry of the development partners behind the Tanzania Urban Resilience Programme, a multi-stakeholder initiative designed to build up Tanzania’s own resilience to the risks our changing climate brings. Natural disasters, it believes, occur just as often from failed planning as they do from the effects of climate change itself.

The main contributor to risk? Rapid urbanization. More than half of the world’s population now lives in cities and 95% of global urban growth will occur in developing countries over the next 90 years. While this growth should bring with it great economic opportunity, it also dramatically increases the concentration of people and assets exposed to climate risk.

In eastern Africa, Tanzania is the most flood-affected country in the region. Its capital city of Dar-es-Salaam, in particular, is the largest and fastest growing east African metropolitan area, placing the city’s infrastructure and its assets, worth about $5.3 billion, at more risk from the impact of floods. Dar-es-Salaam is a flat, sprawling city and its current population stands at about five million.

The 2017 rainy season is an example of this: it has once again turned a largely avoidable risk into disaster, a local newspaper headline from Tanzania’s The Guardian recently reading: “Long awaited rains causing untold damage countrywide.” This damage has taken many forms, forcing household evacuations, necessitating school closures, and demolishing critical infrastructure.

Fortunately, there is recognition from the Government of Tanzania that preventative measures are critical to avoid more headlines like these. The World Bank has committed itself to supporting the government in this through a partnership with the UK Department for International Development. This partnership, the Urban Resilience Programme, is using a unique approach to address the risks:

Before mitigating risk, it’s critical that the relationship between urban growth and the environment is understood. In Tanzania, little data exists to allow an accurate assessment of the exposure, sensitivity, and adaptive capacity of the population and its assets to current and future climate hazards. The program aims to strengthen this understanding of climate and disaster risk in the local context.

Ramani Huria, Swahili for ‘Open Map’, for example, was developed as a pilot for community-based mapping in Dar-es-Salaam, training students and community members to create accurate maps with a variety of different GIS tools that can be used to analyze risk exposure. “It asked the question: can we find a way to use community knowledge about flood-related issues in unplanned and informal areas, and can we formalize that and make it actionable? The answer was ‘yes’,” said Edward Anderson, the Bank’s Senior Disaster Risk Management and ICT Specialist in Tanzania.

Tanzania’s urban centers are expanding rapidly, with Dar-es-Salaam alone expected to grow by 85% through 2025. The urban and land use planning system as it stands cannot manage growth as fast as this and preserve the city’s natural environment at the same time. The Tanzania Urban Resilience Programme aims to strengthen the city’s systems to plan for and reduce the impact of climate risks.

In addition to managing water drainage, investment is being made in the next generation of innovative urban planners, with the formation of a ‘Resilience Academy’ – a curriculum developed with academia and the private sector to engage university students. Evidence of the benefits of such an investment lies with the Zanzibar Mapping Initiative, through which faculty and students of the State University of Zanzibar have been taught geospatial skills and supplied with a fully equipped DroneLAB.

No urban area is completely free of the risk of disaster, particularly one with its city center located on a flood plain like Dar-es-Salaam. This is why the third part of the Urban Resilience Programme aims to strengthen disaster preparedness and emergency management, not just in Dar-es-Salaam but across the country. Using locally identified risk scenarios, emergency response plans are being initiated. Zuia Mafuriko, Swahili for ‘Stop Flooding’, has served as a pilot project in Dar-es-Salaam to train and implement emergency flood response teams for integration into existing responder networks.

With the support of Global Facility for Disater Reduction and Recovery (GFDRR) and the Understanding Risk Community, a technical launch for the program is underway to bring government officials and others together to discuss the opportunities that could be made available under the program. The event includes a symposium on Greening Africa’s Cities that will facilitate broader dialogue on the impact of urbanization on the environment in Africa, and measures that can be undertaken to promote a more harmonious relationship between built and natural environments.